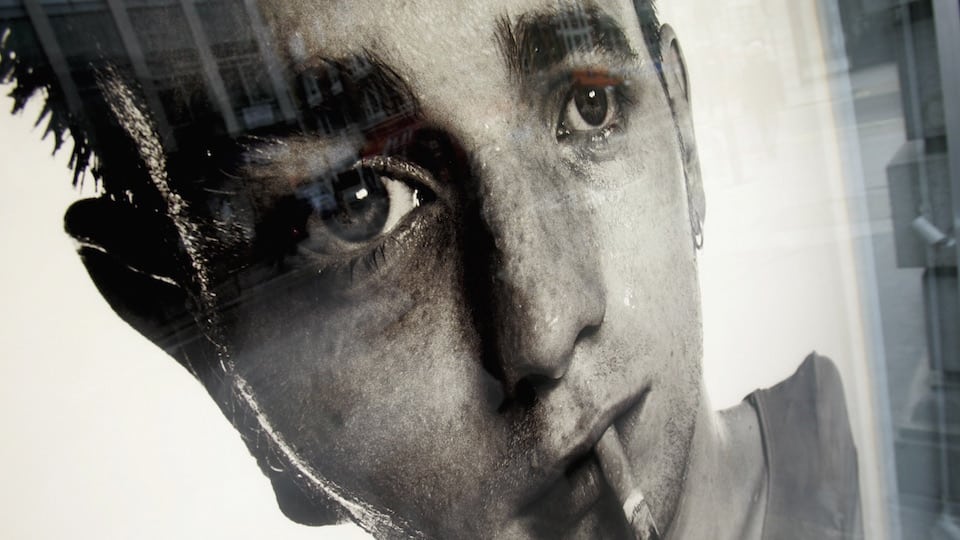 If one film truly captures the zeitgeist of ‘90s Britain, that’s director Danny Boyle’s 1996 masterpiece Trainspotting. Based on Irvine Welsh’s salacious novel of the same name, this heart-racing, adrenaline-pumping movie follows the misadventures of a group of heroin addicts living in Edinburgh. Boyle’s hedonistic odyssey, which soon became the calling card for Cool Britannia, was fuelled by an especially effective soundtrack in which Britpop, early rave, rock, and techno all came together in perfect, chaotic harmony. Here are just some of the iconic songs that made this BAFTA-winning film that for all its period details has never gone out of style.

Trainspotting didn’t just resurrect Iggy Pop’s career. It immortalized him. Iggy’s music is heavily featured with “Lust for Life” kick-starting the film with whiplash energy as the song’s thundering percussion mirrors the careering feet of Renton, Sick Boy, and Spud as they race through Edinburgh’s grimy streets. Above the kinetic beat of Pop’s signature song, we hear Ewan McGregor’s infamous “Choose Life” monologue; the music and the speech melt together in perfect synchronicity. It’s one of cinema’s most memorable intros when this debauched junkie told us we “gotta dance ‘til we die.”

“Mile End” paints a dismal depiction of one of London’s famously disreputable neighborhoods. That also makes it the perfect accompaniment to Renton’s housing situation when Begbie comes to stay. Songwriters Jarvis Cocker and Steve Mackey reportedly drew on their own housing woes when penning this tune, and while it’s certainly not touristy material, it’s a strikingly real portrait of what Skid Row in the East End is really like.

This Eno tune accompanies one of the most harrowing, even notorious, scenes in Trainspotting: the one in which Renton climbs into “the worst toilet in Scotland” in order to retrieve some unused skag he’s inadvertently expelled. A nauseating if surreal sequence, the scene also a strange beauty thanks to Eno’s serene, instrumental. As Renton climbs into the toilet and into a deep blue pool of water, Eno’s dazzling, ambient score allows us to experience the high of drugs thereby revealing to the uninitiated, and affirming to those in the know, why anyone would go to such lengths in order to score.

Underworld had been around since 1986, but the dance pair only really took off after the release of their 1994 album Dubnobasswithmyheadman. From this, the little-known B-side “Born Slippy” would soon become the band’s signature hit. That was the power of the Trainspotting soundtrack. Legend has it, Boyle discovered this tune one night while browsing in a record store and knew he had to include it in his film. Played over the movie’s climactic ending, “Born Slippy” encompasses exactly who Renton is, and always will be. Trainspotting might be about heroin, but this song is pure ecstasy.

This song comes in as Renton discovers that Diane (the girl he has just spent the night with) is underage. As Renton sits in silence with her parents the following morning, the upbeat, new wave hit makes the uncomfortable situation even more horrifying as if the boppy tune were a jibing torturer in Renton’s troubled mind. In the previous scene, Renton first catches Diane’s eye over the sounds of “Temptation” by Heaven 17, but the following morning, everything, including the “Temptation” of the previous night, has changed.

While the vast majority of the Trainspotting soundtrack is British, Boyle made use of a few immaculately chosen American songs too such as Lou Reed’s “Perfect Day.” This beautiful tune, however, is ironically contextualized as it’s played over Renton overdosing on heroin then being rushed to the hospital. As Renton wakes up on a stretcher after a nurse injects him with adrenaline, Reed’s lingering words “You’re going to reap just what you sow” transition him into his new phase of going cold turkey. “Perfect Day” is that stark reminder that is the near-death experience.

0 comments on “Soundtracks That Rock: “Trainspotting””