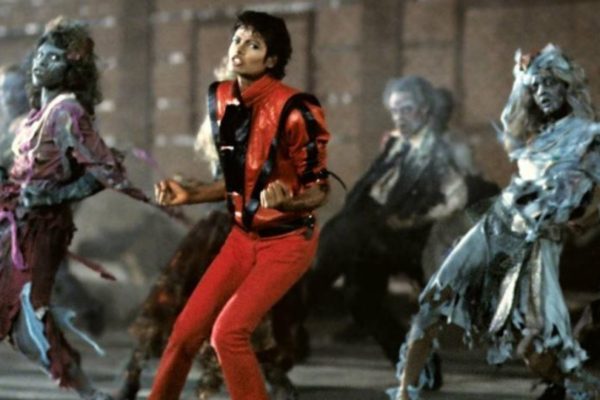 Remember our totally bitchin’ list of 10 albums that defined being a teen in the ’80s? If not, please stop reading this new list pronto and get over there and check it out. If you do recall that earlier list however, then you’ll likely appreciate this new list of 10 more albums that served as the soundtrack for Gen X, according to a different expert: You. That’s right. We’ve compiled your Facebook comments and likes and pulled together a follow-up list of the decade’s defining albums, based on your passionately presented feedback. And, yeah, this is every bit as good as that first list. Since you created it, you may like it better.

Between October 1982, when Thriller was released, and May of 1984 when the title track and seventh single drifted out of the Hot 100 for the last time, Michael Jackson was everywhere. He was on every radio station. He was, belatedly, on MTV. He was on the turntable at every middle-school and high-school party. He was in Pepsi commercials and on the road touring with his brothers. He was adding vocals to the novelty song “Somebody’s Watching Me” by Barry Gordy’s son and giving “Weird Al” Yankovic a career highlight (“Eat It”). Thriller reached more people than probably any other music of the decade, making it more than a mere teen signpost. Thriller was the ’80s.

2. Tears for Fears’ Songs From the Big Chair

Like any two-bit 16-year-old would-be philosopher worth his salt, I greeted”Everybody Wants to Rule the World” as revealing a self-evident truth. It remains something of a touchstone when trying to understand human motivations and behavior, which I do sometimes when I need a frustration fix. At any rate, the singles from this album — the aforementioned first single, “Shout” and “Head Over Heels” — dominated the pop and album rock charts for all of 1985 and the less-successful-but-absolutely-destructive “Mother’s Talk” kept them highly visible well into 1986.

The first “metal” MTV breakthrough…But when’s the last time we actually called these guys metal? Were they ever? Regardless, it’s a hell of an album, building on the promise of their sophomore effort (and introduction to producer Mutt Lange), High and Dry and foreshadowing the aural pleasure dome that was Hysteria. Among Pyromania‘s hits are such period-perfect tunes as “Photograph” and “Rock of Ages.”

Do you have any theories as to why “Don’t Stop Believin’” has turned out to be such a cultural touchstone? It wasn’t their biggest hit, or even the biggest hit off of this album. Is it the way it’s been embraced by sports teams fighting an uphill battle? Covers by everyone from Starship to Alvin and the Chipmunks? Its appearance in that last Sopranos episode? Have a theory? We’re all ears.

In the 2010 documentary Beyond the Lighted Stage, Rush drummer Neil Peart states flatly: “I think Rush was born with Moving Pictures.” If we’re going to argue a point with Neil Peart, this isn’t going to be the one… especially, factoring in “Tom Sawyer.” It’s a classic album, laden with great FM-oriented songs and the obligatory Rush prog jams. An absolute staple for at least the first half of the decade.

Producer Trevor Horn takes over, gets these guys to finish songs in less than five minutes and imbues each of them with state-of-the-art studio wizardry. The result: A number-one single (“Owner of a Lonely Heart”), other songs (“Changes,” “It Can Happen,” “Leave It”) in heavy rotation on MTV, and the rebirth of a ’70s prog-rock dinosaur long since left for dead. No small achievement.

7. Bruce Springsteen’s Born in the U.S.A.

As ubiquitous in its own way as Thriller, this album likewise spawned seven singles over the course of more than a year, each of them reaching the top 10. It solidified Springsteen was the major artist his cultists always insisted, and was purchased by pre-teens, grandparents and everybody in between. Like Thriller.

Maybe the best frat party album ever, Licensed to Ill‘s signature song — “(You Gotta) Fight for Your Right (to Party)” — has the added distinction of finding a second life when decades later, Beastie Boy Adam Yauch created a half-hour short that literally picks up where the first video left off and stars everyone from Rashida Jones, Chloe Sevigny, and Susan Sarandon to David Cross, Orlando Bloom, and Seth Rogen. To name a few.

In which Messrs. Strummer and Jones finally reach the American top 10 just in time to tour stadiums with The Who before they disintegrate. Just be happy that it happened. Otherwise, we’d never have “Rock the Casbah” and “Should I Stay or Should I Go.”

The only band to make both “defining the ’80s” lists, albeit by the skin of their teeth. College darlings no more, Michael Stipe and company finally achieved their first  top 10 hit (“The One I Love”), one of its best (and well known) anthems (“It’s the End of the World and We Know It”) and an almost complete lack of filler. It was on boomboxes on campus in the fall and winter of 1987 and it was lovely.