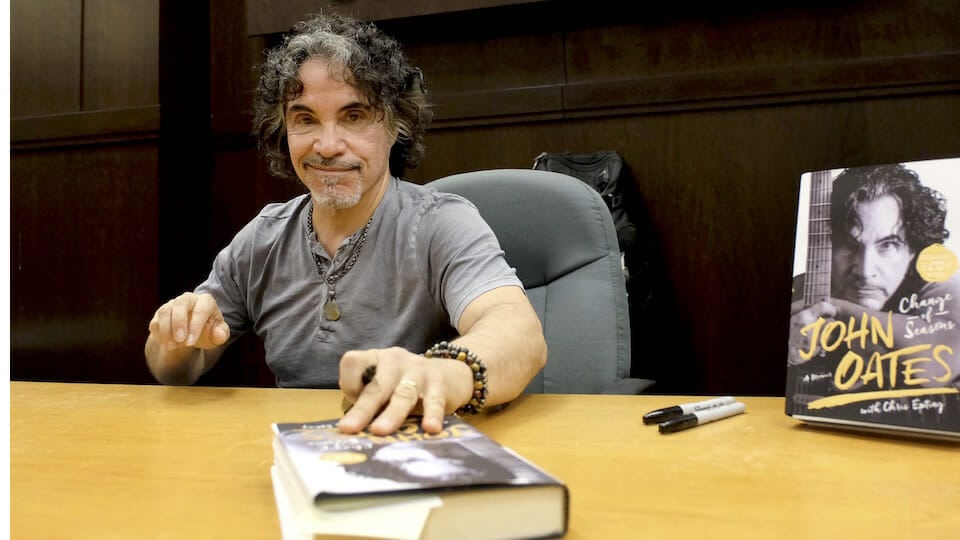 The long shelf of rock star autobiographies is crammed with an embarrassment of riches. These inside stories aren’t simply starry tales, they’re tragedies and stories of survival, debauchery, and triumph that humanize lustrous icons as they connect with our own experience. Hell, Patti Smith’s Just Kids even won a Pulitzer Prize! Below is a worthy selection of recent releases within the genre. They’re all great reads from musicians who’ve lived to tell the tale (and survived long enough to get some perspective). You’ll find a couple of household names in the mix like John Oates, Greg Lake, and T-Boz but really all of these incredibly talented musicians have wisdom to impart.

There’s gentility and kindness in this memoir by Greg Lake, a founding member of King Crimson, and Emerson, Lake & Palmer (the latter known for classically-influenced hits like “From the Beginning” and the titular “Lucky Man” — a song Lake wrote as a teenager). There’s also an overlay of poignancy here as this posthumous release came out the year after Lake himself died and his bandmate Keith Emerson committed suicide. Low on prurience, high on insight, this lovely memoir addresses the latter tragedy while also celebrating the author’s 43 years of happy marriage. In the end, you’d have to agree that overall Lake was indeed a lucky man.

The tale of Campbell’s once-in-a-lifetime gig as Sting’s guitarist for the 1987 “Nothing Like the Sun” tour is delicious – breezy, witty, edifying. That he was selling candy at a Broadway theater concession shortly before landing this worldwide tour simply adds to his tale’s rags-to-riches appeal. To his credit, Campbell is good-hearted and hilarious as a wide-eyed raconteur. He’s both a fan and a regular guy abounding with funny road stories about Sting (the man and the boss) as well as Springsteen, Clapton, Jon Bon Jovi. Yet far from gossipy or jaded, this is a man who owns his foibles and never puffs himself up as he takes us on an engaging ride.

The Nitty Gritty Dirt Band may have had its biggest hits (“Mr. Bojangles,” “Will the Circle Be Unbroken”…) back in the day but it’s actually still making the rounds in an albeit much-changed form. Banjo-playing John McEuen, a founding member, and the band’s long-time manager recounts the entire career of NGDB in this menschy, memorable account where frankly, intimate romantic details are few. (Given his many children and two marriages, this makes total sense.) But you can more than console yourself for any loss of salaciousness by way of his fabulous folksy tales of his high school buddy Steve Martin as well as legends Roy Acuff, The Oak Ridge Boys, and Linda Ronstadt.

TLC was one of the most impactful girl groups of all time and Tionne Watkins, the trio’s lead singer co-wrote and performed some of the CrazySexyCool-est songs of the 1990s: “Waterfalls,” ”Unpretty,” and “No Scrubs” among them. As you’d expect, “T-Boz” has a no-nonsense approach to recounting the backstage life of this legendary threesome, sparing Rozonda “Chilli” Thomas for the most part but delivering touching insight into the life of troubled Lisa “Left Eye” Lopes whose fatal car crash at 30 broke up the band. But this is not a pop star’s cautionary memoir of the auguries of fame. More so, it details Watkins’ life-long battle with sickle cell anemia, her bounce back from bankruptcy, and how she survived a brain tumor! This is one tough broad with love to spare.

We’re guessing you know all their monster hits without us naming them but what you might not know is that the story of John Oates — the ‘stached half of Hall & Oates — is pointedly not endlessly entwined with that of his pop partner Daryl Hall. So while Oates warmly acknowledges his long-time collaborator, he’s got his own personal, powerful tales to tell which includes moving backstories to songs, moments from the road, struggles with finances, and marital woes. A substantive peek into the soul of one-half of pop music’s giant duos, Change of Seasons simply awaits a companion volume from Daryl Hall.

Photo: Musician John Oates at a signing event for his new book ‘Change of Seasons’ at Barnes & Noble at The Grove on July 27, 2017 in Los Angeles, California. (Photo by Matthew Simmons/Getty Images)

2 comments on “5 Rock Memoirs: From the Nitty Gritty to One With Sting”