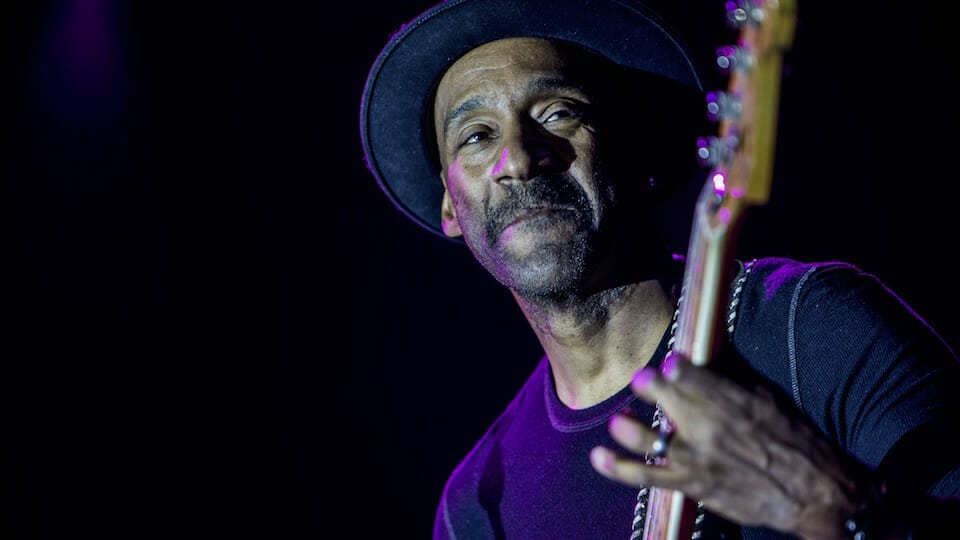 If Marcus Miller’s only credit as a bassist was the chair in Miles Davis’ 1981 “comeback” band, his status in music history would be secure. And if his only production credits were the groundbreaking trio of late-80s Miles LPs for Warner Brothers (Tutu, Amandla, and Music From Siesta), he would still be in a class apart from any other musician on the planet. Fortunately for us, music history had other plans for Marcus Miller. In over four decades of activity as a bassist and/or producer, he has cultivated a stellar resume that reads like a who’s who of jazz, R&B, and pop music. But his solo discography is equally impressive: nearly two dozen impeccable albums incorporating the finest musical elements from around the globe. Simply put: You pay attention when Marcus Miller puts out something new. And his latest, Laid Black, is a stunner that’s positively bursting with soul.

See Related: “It Takes A Long Time to Be Able to Play Like Yourself”

There’s tons o’ funk on Laid Black, and nobody lays down a groove like Marcus’ ever-potent thumb hitting those four strings. But Laid Black doesn’t exist in a throwback vacuum; It’s 360-degree Marcus, always conscious of a rich musical tradition but firmly rooted in the present day. The sweet, vintage mid-tempo funk of “7-T’s” and “No Limit” sits perfectly alongside the EDM-flavored 808 kicks and stuttering hi-hats that season “Trip Trap” and “Keep ‘Em Runnin.” The latter track is especially a highlight, a trap-music-inspired workout based on the Earth, Wind & Fire classic “Runnin’” featuring Marcus’ edgy bass taking the melody, punctuated by slick horn stabs and a sassy rap (!) in which Marcus seemingly breaks down his approach to music: “They think they catching up…I hit ‘em with this other thing!”

See Related: “All About That Bass”

Laid Black also finds Marcus’ voice as a soloist evolving into something even deeper, more raw and emotional. From the bluesy distorted riffs of “Trip Trap” to the creamy fretless shadowing his wordless vocals on the gorgeous ballad “Someone to Love,” it is thrilling to hear this veteran musician still seeking new improvisational frontiers. And as a leader, Marcus always elicits tremendous performances from the musicians around him. Marcus’ longtime band members and collaborators, altoist Alex Han and keyboardist Brett Williams, are absolutely killing it all over this set, and there are standout performances from guests like Trombone Shorty and altoist/ flutist Kirk Whalum. With so many musicians, sounds and textures stirred into Marcus’ musical stew, repeated listens to Laid Black always uncover something new: a blazing horn riff here, a percussion groove there, or the multiple layers of emotion on “Sublimity ‘Bunny’s Dream’” that hit you even harder the second time you hear it.

In 2013 Marcus Miller was appointed a UNESCO Artist for Peace and the spokesman for the organization’s Slave Route Project, helping to teach future generations about the tragedy of slavery and its enduring impact on the world. He is an artist with a clear sense of purpose and mission: to promote goodwill, love, and peace through his music. That mission is felt loud and clear throughout the nine tracks on Laid Black, a soulful and joyful listen from start to finish. It is the sound of one of America’s premiere musicians in peak form, an artist who is determined to continue evolving, growing, and searching for the perfect groove.