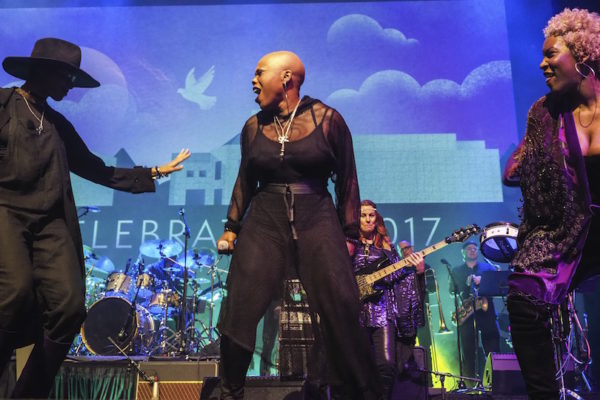 Recording Academy president Neil Portnow really “stepped” in it with a poor choice of words following this year’s Grammy Awards. When asked about the conspicuous lack of female representation at this year’s ceremony, he responded that “…women who have the creativity in their hearts and their souls, who want to be musicians…” need to “step up.” Portnow, of course, apologized within 48 hours, but the damage was done: Social media called him out as another powerful white male “mansplaining” unsolicited career advice to women. But Portnow’s statement was particularly foolish because the moment I read it I named five ready-for-big-time female artists off the top of my head whose music I love, who have been “stepping up” for years. These tremendous — if lesser-known — songwriters, singers, and producers, operating parallel to the megastars exalted by the Recording Academy, are the architects of a sound and sensibility that reflects these turbulent and revolutionary times.

Ali Handal
This LA-based veteran singer, songwriter and masterful guitarist is redefining feminism with rock and roll. Ali’s latest CD on Red Parlor Records, That’s What She Said, is a soulful, sassy and rocking celebration of womanhood with songs such as “You Get What You Settle For” and “I Love My Pussycat.” She’s also the author of Guitar For Girls, a music method book aimed directly at inspiring the next generation of female musicians, and she’s maintained an impressive pace while living with a rare, incurable form of cancer. “Stepping up?” Ali Handal certainly is.

Butterfly Boucher
Born in Adelaide, Australia and currently based in Nashville, Butterfly Boucher combines a bold melodic sensibility with the massive raw power of alt-rock and the unpredictable experimentation of modern technology. From her four solo albums to her work with the Nashville collective Ten Out Of Tenn, the fiery sound of this immensely creative artist is unmistakable. Butterfly stands out from the pack, and I can’t wait to hear what she does next.

Juliette Commagere
Artists like Juliette Commagere make life worth living. She has created three mind-blowing solo albums, and each one is a complete universe of sounds and feelings. Her songwriting warms your soul, her vocal instrument is as sweetly smooth as caramel, and the otherworldly production and arranging demands full-attention listening. She’s David Bowie, Joni Mitchell, Kate Bush, and Peter Gabriel rolled into one. Get a great set of headphones and prepare to fall in love.

Maya Azucena
This Brooklyn native boasts a 4-octave vocal range and an indomitable spirit. Maya views her music as a vehicle for social activism; her 2014 indie single “Fearless” is an anthem of empowerment that sums up her mission to uplift her fellow humans. Her tunes also happen to be funky as hell, inspiring you to dig on the phat grooves and live your best life. Full disclosure: I went to high school with Maya so I’ve known her for almost 30 years, and I’m not at all surprised at the visionary artist she has evolved into.

Shelby J
Hailing from North Carolina, Shelby J came to prominence as a member of Prince’s New Power Generation. (That was Shelby in all-white during Prince’s legendary 2007 Super Bowl Half Time show.) But Shelby is much more than a member of the “Purple Fam.” She’s an electrifying performer in her own right, with a soulful voice and an unwavering commitment to the groove. Her smooth and catchy single “Good 2 Know” from last year’s 10 album succeeds without any gimmicks or tricks; just 100% soul from the heart. Shelby J is one 2 watch.

PS. Wendy and Lisa have since branched out from their Prince days.  And, of course, Debbie Harry of Blondie rules all.

0 comments on “Dear Grammys: 5 Women in Rock Who Already “Stepped Up””