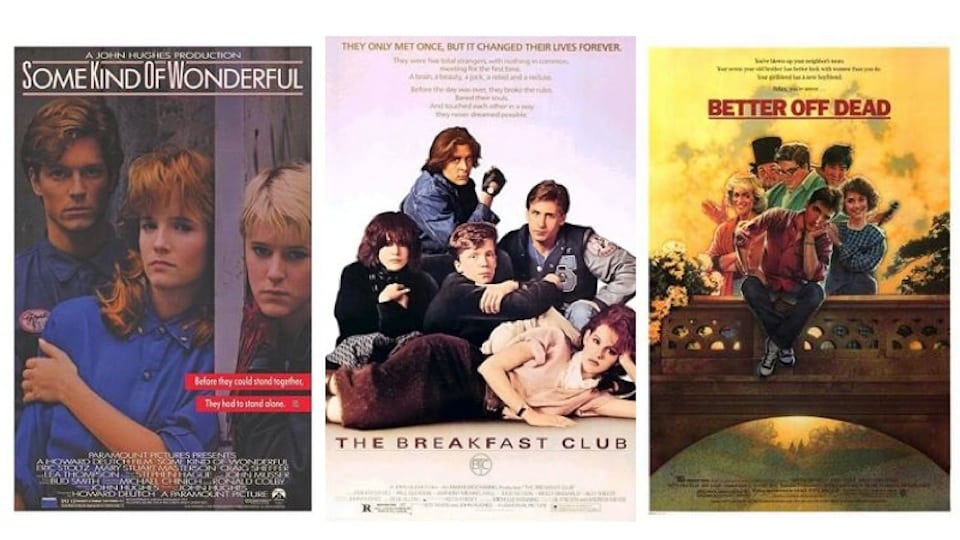 Before there were TV shows like 13 Reasons Why or Stranger Things or Riverdale, teenagers got their fix of adolescent angst at the cineplex. In the 1980s especially, teen flicks reigned supreme at the box office, offering up hefty doses of slapstick comedy, bawdy sex humor, heartfelt drama and swoony romance. It was an era of popular kids and the geeky losers who pined for them, all while sporting the decade’s rad fads and listening to some killer synth-pop tunes. Without further ado, here are 10 movies that defined being a teen in the ‘80s. You’re never too old to enjoy them again.

10. Girls Just Want to Have Fun (1985)
Molly Ringwald may have been the queen of ‘80s teen flicks, but Sarah Jessica Parker made good on her post-Footloose (see: #8) fame by starring in this sweet movie about a sheltered Catholic schoolgirl….who just wants to dance! Along the way, of course she falls in love with her dance partner (Lee Montgomery) while learning to stand up to her strict Army dad (Ed Lauter). The music and choreography are ‘80s-licious, and Helen Hunt practically steals the show as Parker’s ballsy BFF.

9. Ferris Bueller’s Day Off (1986)
Sometimes a teen’s imagination is the most outrageous thing about him. Then there are kids like Ferris Bueller (Matthew Broderick): the high-schooler everyone else wanted to be, the rare adolescent who was actually able to pull off the extravagant flights of fancy twisting and shouting in his head. For one amazing day of teenage truancy, he lives out the dream of a lifetime by forgetting about the rules, thinking on his feet and (hey, why not?) pretending he’s “The Sausage King of Chicago.”

8. Footloose (1984)
Ren (Kevin Bacon) just wants to  boogie! Unfortunately, small-town moralists try to keep the boy down in this optimistic teen drama about being a rebel with a cause. Besides the fabulous dance sequence and obligatory climactic scene set at a prom, Footloose features early appearances by Sarah Jessica Parker and Chris Penn, as well as Kenny Loggins’ unforgettable title song.

7. Dirty Dancing (1987)
It’s the romantic musical drama that launched a million preteen Patrick Swayze crushes, sparked a revival for oldies music and convinced every bride and groom to attempt “the lift” at their first wedding dance. Dirty Dancing tells the sweet tale of a girl so innocent she’s literally nicknamed Baby (Jennifer Grey), who learns about living, losing and loving as she falls for a pro dancer (Swayze) from the wrong side of the tracks. Rarely has true love sounded as good as when Swayze’s Johnny Castle insists, “Nobody puts Baby in a corner.”

6. Better Off Dead (1985)
John Cusack made his bones as an up-and-coming marquee teen in the ‘80s by portraying many an unpopular suburban every-teen. (See also: Say Anything at number 5.) In the darkly screwball Better Off Dead, his Lane Meyer, like most adolescents, thinks about nothing but sports (specifically skiing) and his girlfriend. When he loses the latter to the ski team captain, he embarks on a hilarious quest to win her back.

5. Say Anything (1989)
After a decade of goofy teen flicks, Cusack graduated from the Reagan era and left adolescence behind for good with his final high-school role — that’s still one of his best roles ever. His Lloyd Dobler continues to stand as one of the best examples of lovelorn masculinity committed to film. (“I gave her my heart. She gave me a pen.”) In his directorial debut, Cameron Crowe turns a standard guy-wants-girl, guy-gets-girl, guy-loses-girl tale into a mature, affecting rom-com, laden with pathos, humor — and that unforgettable boom-box scene scored to Peter Gabriel’s “In Your Eyes.”

4. Pretty in Pink (1986)
So classic it’s like the Romeo and Juliet of ‘80s teen dramas, Pretty in Pink tells the timeless tale of star-crossed lovers — working-class Andie (Molly Ringwald) and prepster Blane (Andrew McCarthy) — except it’s not so much their rival families keeping them apart as their opposite spots on the socioeconomic spectrum. Coming in as a court jester is Andie’s loyal and irrepressible sidekick Duckie (Jon Cryer), whose dance scene to Otis Redding’s “Try a Little Tenderness” makes the whole movie worth watching. Bonus points for having one of the most killer movie soundtracks of this or any era.

3. Some Kind of Wonderful (1987)
There’s a reason Some Kind of Wonderful is perhaps the most pensive and melancholy member of the ‘80s-teen cinematic canon. Writer John Hughes penned this romantic drama as a followup to his Pretty in Pink after the latter’s happy ending left him disappointed. He re-teamed with Pretty director Howard Deutch for a gender-flipped story about a girl from the wrong side of the tracks (Mary Stuart Masterson) who pines for a guy (Eric Stoltz) who only has eyes for the most popular girl in the school (Lea Thompson). And it worked, as New York Times critic Janet Maslin hailed Wonderful at the time as a “much-improved recycled version of the Pretty in Pink story.”

2. The Breakfast Club (1985)
In what was perhaps his most quintessential work, writer-director John Hughes offered up a case study in high-school cliques. There’s something everyone can relate to in the brain (Anthony Michael Hall), the athlete (Emilio Estevez), the basket case (Ally Sheedy), the princess (Molly Ringwald) and the criminal (Judd Nelson) who forge unlikely friendships and a couple of romantic connections over the course of a single day spent in Saturday detention.

1. Sixteen Candles (1984)
The decade’s signature coming-of-age story gave Molly Ringwald her finest role as a sophomore named Samantha struggling with the anguish of, well, everything: her unrequited crush on popular senior Jake Ryan (Michael Schoeffling); the pesky freshman geek who has an unrequited crush on her (Anthony Michael Hall); her inattentive parents; and her about-to-be-married older sister (Blanche Baker). Oh yeah, and it’s also her 16th birthday. After Sam loathes her way through 24 hours of hell, she finally gets her fairy tale ending.

Photo Credit: Fair use images of movie posters for Some Kind of Wonderful, Better Off Dead, and The Breakfast Club.