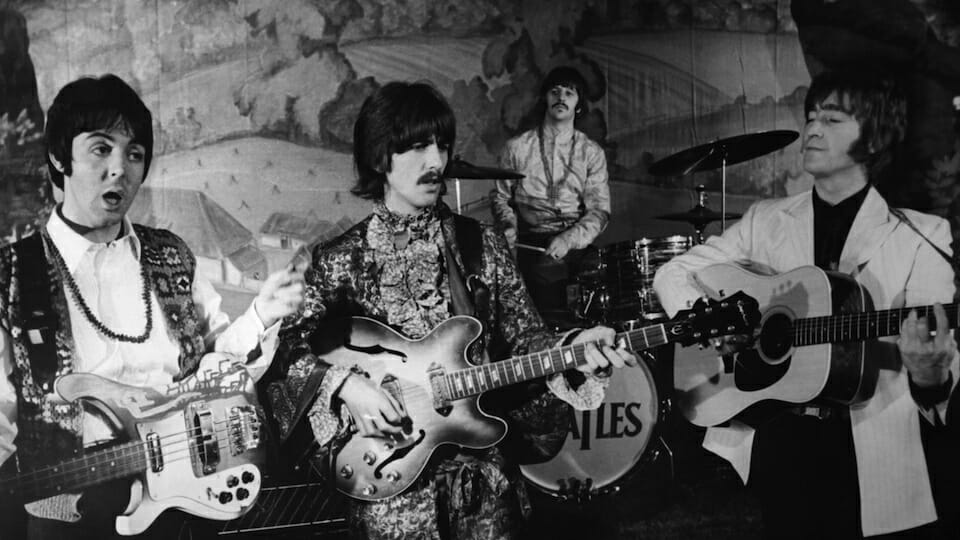 An often underappreciated element of the Beatles’ songwriting is their seemingly effortless ability to craft a truly memorable ‘intro.’ The art of writing a timeless song opening is a masterful skill. The Fab Four were particularly expert in doing so throughout their eight years together.

The band’s finest introductions are typically iconic in their own right, innovative for their time, and often acts of musical genius in and of themselves. Here are nine of the best intros by the Fab Four.

One of the most simplistic yet impactful Beatles intros appears immediately on track one of their debut album Please Please Me.

The bouncing bassline and clanking guitar work are pure magic, perfectly setting the scene for the rest of the band’s first LP and also their formative years.

“A Hard Day’s Night’s” intro is all about a single sound. This title track from the Beatles’ third album opens with a very distinctive note, created using a combination of twelve-string electric guitar, an acoustic six-string, bass, and piano. Strummed aggressively and left to ring out, the exact chord has become the subject of much speculation over the years.

“It is F with a G on top,” George Harrison would finally confirm in 2001. “But you’ll have to ask Paul about the bass note to get the proper story.”

“I Feel Fine” is one of the earliest examples of ‘feedback’ ever used on a studio recording.

Feedback is common in modern-day music with numerous artists choosing to use it excessively. But in the mid-1960s, the technique of utilizing interference between an electric instrument and speaker was much rarer, especially as part of the opening to a pop song.

It shouldn’t be understated, that the bassy groan at the beginning of “I Feel Fine,” which quickly morphs into a swirling wave of noise, was incredibly innovative for the time.

In today’s music world, a ‘fade in’ hardly seems revolutionary. Yet the concept of a track slowly emerging from silence would have been a new experience to most listeners of 1960s mainstream music.

The Beatles’ use of the technique on their seventh number-one hit “Eight Days A Week,” both a daring and groundbreaking achievement, is widely regarded as the first occasion a ‘fade in’ appeared on a pop music studio recording.

The intro to “Help!” is perhaps less about musicality and more about song structure.

Despite their obvious brilliance, a significant portion of the Beatles’ early pop creations were fairly generic in terms of structuring, with an opening verse followed by the chorus, then rinse and repeat.

But when the title track from their 1965 album Help! begins, they add a certain unexpected twist to proceedings, with John Lennon’s emphatic chorus lines immediately bursting into life from the off –  in place of the normal instrumental beginnings you might expect.

Name three famous Beatle guitar riffs and it’s highly likely that the opening to their 1965 Double A-side “Day Tripper” is one that immediately springs to mind.

Perhaps their most notorious lick, George Harrison’s precisely plucked and near hypnotic guitar loop sits neatly in amongst Ringo’s rhythmic rattle of drums.

The entire intro is so tightly performed that when it transitions into the first verse there is an intense flow and drive to the number that really never ceases.

Ever heard of a Mellotron? Neither had John Lennon. But over the course of 1966, he’d been searching for a new sound to use on the band’s upcoming album Sgt Pepper’s Lonely Hearts Club Band and finally settled on the Mellotron Mark 11.

This little-known organ would become instantly recognizable to Beatles fans of the time and future generations alike.

First appearing as part of a double A-side alongside “Penny Lane” and then later on Magical Mystery Tour, the plodding keys used to open “Strawberry Fields Forever” are both charming and have a real sense of melancholy.

The White Album begins in style with a truly awesome sound effect.

Stereo sound was in its infancy and at the beginning of “Back In The U.S.S.R”  the Beatles used it to their advantage, as the noise of a jumbo jet seemingly soars across the speakers. The excitement only grows when the plane then fades away, replaced by cranking guitars and the swell of Paul subbing for Ringo with a thrashing drumbeat.

Abbey Road‘s opening number brings the bass guitar to the forefront, providing a memorable and legendary deep groove unlike much of the band’s music before it.

McCartney’s earthy riffing is also accompanied by an inspired rolling drum sequence and a sleazily whispered ‘schuh’ sound to boot.

This intro is evidence of the Beatles’ darker work and with its somber tone signaled both a shifting maturity in their sound and perhaps a hint of sadness at their eventual demise.

39 comments on “9 of The Best Beatle Intros”