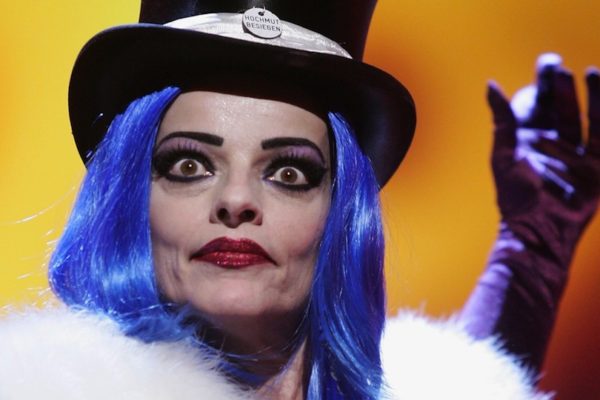 We all have our most cherished yuletide albums. For some it’s Merry Christmas by Mariah Carey; for others, Christmas Portrait by the Carpenters; and for still others (many of them CultureSonar readers, no doubt), it’s that irresistible The Beach Boys Christmas Album. But sometimes, it’s good to shake things up like a snow globe without spoiling the Christmas spirit. Below are five carols that will keep you in a festive mood and probably provide a good topic of conversation. “Hey, who is that we’re hearing right now?” Well, it’s certainly not Bing Crosby or Andy Williams! In fact, it just happens to be…

1. Lady Gaga’s and Joseph Gordon-Levitt’s “Baby It’s Cold Outside”
Despite how many times this holiday standard has been performed, it’s almost always done with the woman insisting she needs to leave while the man is coaxing her to stay. Count on Lady Gaga to finally give this duet a way overdue switcheroo. So who’s she asking to stick around for a cozy sleepover? Why, none other than Joseph Gordon-Levitt. And who brought these two crooning lovebirds together? Not Santa. The Muppets, my friends.

2. Destiny’s Child’s “Carol of the Bells”
Although they renamed it “Opera of the Bells” for their next-to-last album 8 Days of Christmas, it’s actually an R&B vocal rendition of “Carol of the Bells” — which admittedly also has some pretty rockin’ versions from Metallica and Trans-Siberian Orchestra. This one is less well-known than its heavy metal counterparts despite an a cappella arrangement done by Beyonce.

3. Billy Idol’s “Jingle Bell Rock”
There’s something strange about the whole notion of a Billy Idol Christmas album yet he did indeed make one entitled Happy Holidays a decade ago and it’s a recording fairly devoid of any edge or rebelliousness. Indeed, this video of “Jingle Bell Rock” — which features Billy doing some of his signature moves in a shirt unbuttoned unseasonably low — suggests not so much a punk rock Christmas as your Uncle Billy after a few eggnogs hogging the karaoke machine like he always does. Well, at least he can carry a tune!

4. Nina Hagen’s “Silent Night”
The Deutschland’s Godmother of Punk was always New Wave’s middle finger to opera. From “New York New York” alone, we knew she could hit the high notes as confidently as any classical diva but she was “going to another disco” instead of the symphonic hall. So what’s surprising about her rendition of “Silent Night” isn’t the rich fullness of her voice or that she’s singing in her native German but that she’s doing it with such relative restraint.

5. Pekkanini’s “White Christmas”
We’ll be the first to admit that no one can sing “White Christmas” as well as Bing Crosby, although many have tried. So maybe the answer when it comes to covering this perennial is to not sing it at all but instead to play it on the theremin, that strange electronic instrument that makes every tune sound like it’s a scifi movie theme song — even an old chestnut like this one. As for the musician here, Pekkanini does have some rock credentials having cofounded the Swedish rock group Lonely Hearts in the 1970s. “God Jul,” everyone!