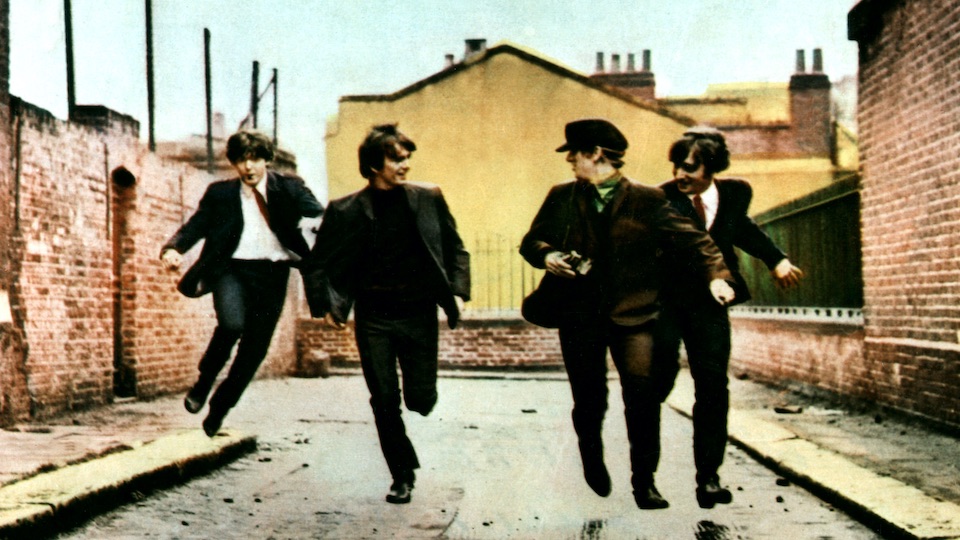 It was near the end of 1963 when the Beatles were first approached about starring in their first film. Music films in those early years were seen as a way for studios to cash in on the rock and roll craze (while it still lasted) with songs and performances that had nothing to do with their silly plots. As we all know, the Beatles took a different approach with A Hard Day’s Night, creating a cinematic masterpiece that changed cinema forever.

A Hard Day’s Night’s storyline and cinematography, as well as the Beatles comedic performances, helped to make the film a classic. But what was truly remarkable was that the Beatles wrote all the songs for the film. Seven new songs, including the title cut, appeared in A Hard Day’s Night along with previously released Beatles music. The new songs showed how quickly Lennon and McCartney were evolving as songwriters.

One Lennon/McCartney song written for the film, “And I Love Her,” was the first Beatles song to be performed with only acoustic instruments. It had a Latin flavor with Ringo playing bongos and George playing claves (a percussion instrument). The song contains a beautiful classical guitar solo performed by George on a Ramirez guitar given to him by their friend Klaus Voorman. Their stellar group performance on “And I Love Her” proved that the Beatles were well versed in many styles of music – not just 3 chord, rock and roll songs.

In America, the Hard Day’s Night album was released with eight songs and four instrumental tracks. But in the U.K., the album contained an additional six songs that didn’t appear in the film. Two of these songs, “Things We Said Today” and “I’ll Be Back,” are similar in that they seamlessly move between minor and major keys, creating an ambiguity of the song’s key and making the music much more interesting. The Beatles would often contrast a major or minor verse with the opposite in the bridge of the song, and McCartney does this in “Things We Said Today.” Lennon does his switch in the middle of each verse, starting in minor and ending in major. These two songs contain deeper, contemplative lyrics. Both songs end with fade-outs, unusual for the Beatles at this point in their career.

These songs and others on A Hard Day’s Night showcased the growing sophistication of Lennon and McCartney’s songwriting and pointed to even greater things to come.

PS. Since you made it this far, save 10% on these films, and everything in our shop, with code CSYT10.

3 comments on ““A Hard Day’s Night” – Innovation All Around”