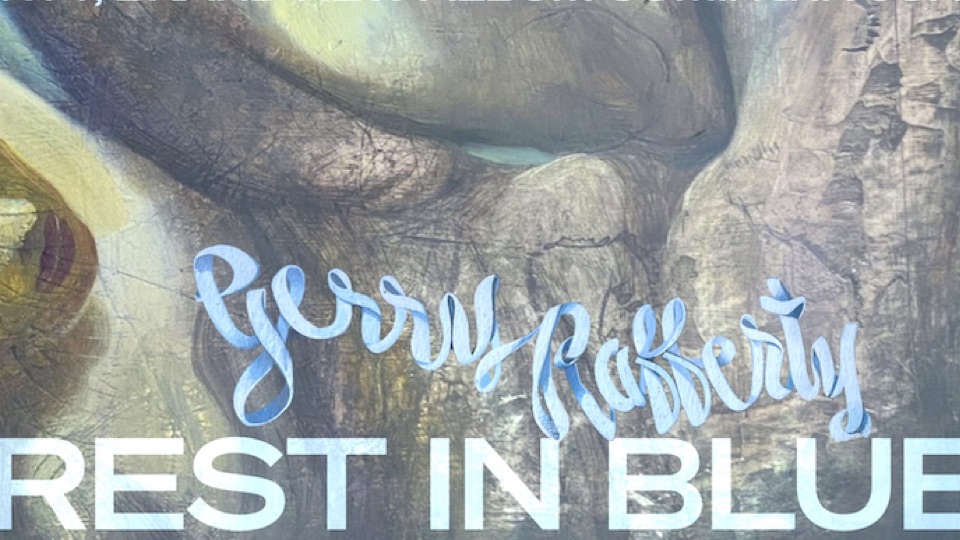 After Gerry Rafferty departed Stealers Wheel, the Scottish songwriter embarked on a journey of self-discovery. With his new solo outlet, Rafferty abandoned the stylish, jagged blues soundscape of Stealers Wheel, and focused on work that was more lyrical, and infinitely more yearning in its resolve. And in almost every respect the just-released Rest In Blue feels like a truer sequel to Ferguslie Park, complete with a re-recording of the Stealers Wheel monster “Stuck In The Middle With You.”

Related: “The One-Hit Wonder File: ‘Stuck In the Middle With You”

Not that this album of posthumous tracks is quite as memorable as Ferguslie Park, but that’s partly because it’s more of a compendium than a bona fide rock record. Apart from the splendid “Wild Mountain Thyme,” little on the record would have made it onto a seventies Rafferty album. Rather, the focus is on the little moments of self-reflection that demonstrate the artist’s reconciliation with his choices.

The bravest of these is probably “Still In Denial”, Rafferty’s confessional of a lifetime spent imbibing (he died from liver failure in 2011) but every song has some merit, from the jaunty “You Are All I Want” to the strangely moving “Dirty Old Town.” In her father’s place, Martha Rafferty stepped in to oversee the album, collating a series of demos, some of them backdated to 1970. “I knew his music had touched people,” Martha recalled. “All the letters he got from fans were always to thank him for how he’d helped them through the darkest times of their lives. What surprised me most was the reaction on the internet. ‘Baker Street’ had two million hits in the two days after his death and he was the third most talked about subject on Twitter.”

Beautifully produced, and presented with tremendous respect for the singer (John Byrne’s artwork doubles as both a requiem and an endearing piece in its own right), Rest In Blue boasts a number of notable luminaries on the album. Alan Clark, formerly of Dire Straits, features on a number of tracks, while Katie Kissoon — a favorite backing vocalist of Roger Waters’ — tackles many of the more complicated harmonies. In the middle comes a polished cover of “It’s Just The Motion,” proving Rafferty’s version holds its own against the Richard & Linda Thompson original.

Meanwhile, Hugh Burns cuts a looming presence, his guitar weaving into the work with spirited ambition. Ultimately, the focus is on Rafferty and the album succeeds quite wildly in that regard: on every track comes that husky voice that soothed so many on the vibrant “Night Owl” and the aching “Right Down The Line.” Many of the tracks were purportedly layered with synthesizers, although they were wisely whisked away to let the voice rise up and soar. He sounds strangely relaxed on “Look At Me Now,” culminating in one of the most pleasant songs on the record.

These chilly surfaces are a strong indication of where he was in life, settled in the moment that he was now singing from. It’s unclear if this recording comes from the 2006 sessions that led to the album but they hold a strong gut-punch nonetheless.

Best of all, the record holds a do-over of “Stuck In The Middle With You,” a splendidly subversive re-drawing from a country and western slant. He redid the song in the nineties, hence the slower pace, and more detailed vocal delivery. Somewhere within this ballad is a fire that holds even stronger in death than it did in life. And if we are to be stuck in the middle with Rafferty, then we’re all the better for it.

4 comments on “Gerry Rafferty’s “Rest In Blue”: The Music Lives On”