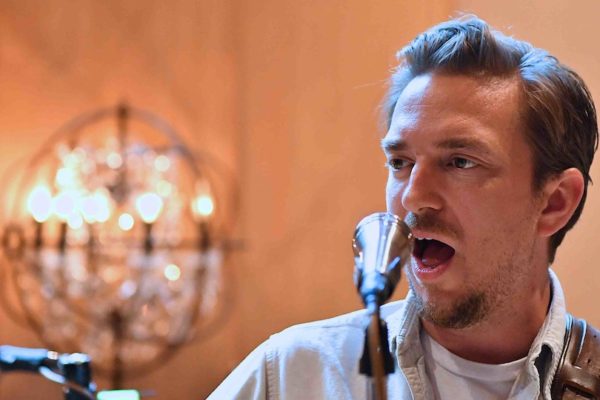 Editor’s Note: We loved JD McPherson when we first wrote about him three years ago; and we still dig him. His new Christmas record is fully in keeping with his retro-yet-current vibe.  Here’s what we first had to say about him.

So, how many guys do you know who grew up on a Oklahoma cattle ranch, earned an MFA in “open media,” got fired from a high school art program (“Maybe you shouldn’t give 15-year-old kids Bad Brains”) and then, in his mid-30’s, launched a successful career as a retro-rocker? JD McPherson is clearly one quirky dude. While most of us shaped our musical preferences via the music of our teen years, McPherson is encyclopedically devoted to songs that were written about 30 years before he was born. His two terrific albums, Signs and Signifiers from 2010 and this year’s Let The Good Times Roll, are throwbacks in the best way. They sound like they were unearthed from some obscure-but-spectacular mid-50’s record collection: full of stomping riffs, hooky songwriting, whoopin’ vocals and killer musicianship.

He recorded his debut effort at the all-analog, all-vintage Hi-Style Studios, home of roots guru Jimmy Sutton, who often mans the upright bass in McPherson’s band. Suffice to say the stuff sounds just great, with the warmth and air those old records brought to the party. McPherson has managed to look backward and forward simultaneously, which is a pretty neat trick.

You can definitely detect the MFA is his taste. He especially loves, for example, the brief moment when New Orleans ruled early rock n’ roll. “You had records being made where you had really, really strong, seasoned session players — accomplished jazz musicians — having to play this real primitive music,” he says. “At the same time, you have teenagers that don’t know how to play that are making records – regional records where they’re trying to play above their ability. So it’s like, the first time where both of those things were totally accepted… I’m fascinated by that idea, that these two worlds were forced to kind of collide.”

He has been getting slow-but-steady traction in his career, opening recently for country star Eric Church and recording with Black Keys Dan Auerbach.

If you haven’t heard him yet, check out his Rolling Stone interview (whose quotes we have so liberally lifted) and YouTube channel.