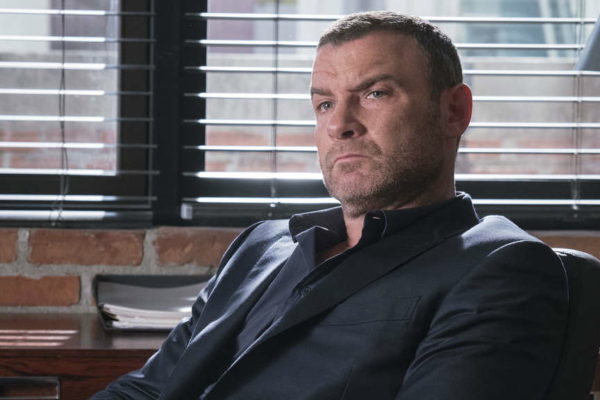 It took me three seasons to get my wife to watch even one segment of Showtime‘s Ray Donovan. Now she wants to have sex with Liev Schreiber, who plays the lead. In and of itself, this does not represent a disqualifier for me of the series. Secretly I think I do too. He is a real man. I realize just saying such a thing in this day and age will make some people perspire with resentment over things “real men” have done over the last few millennia. I don’t care. He is an authentic man and he is hot. The essential features of men have disappeared recently and Ray is in breakneck pursuit of the new and triumphant embodiment of our past. Our hallmark is “We just don’t give a damn” about girlie stuff.

We don’t talk much. That much is for certain. For sure we do not share our murderous past and present with our wives. We provide extravagantly, but we don’t feed them information that will result in their prison time. We drink in a blistering continuum and it never shows until some “babe” or our wives drive an emotion harpoon into our souls. Even then we muffle our tears. Maybe it helps that I am Irish too, but I doubt this is obligatory.

Ray’s company fixes problems in Hollywood. He has a “cut your throat” lesbian and an ex-Mossad agent who lives with his mother on his staff.

He needs little else.

He has an uneasy relationship with the Catholic Church. It had better watch out if Liev considers a fourth season. His father, Mickey, played by Angelina Jolie’s real father, Jon Voight, will make you take the city of Boston off your travel itinerary. Ray tries to kill him at least three times every season. Mickey has four sons and a daughter. One of his sons is black. Yipes!

If Liev gets testy about doing further seasons, I am prepared personally to sweeten the pot with my cash. Did I forget to add that Katie Holmes is in it as well and somebody convinced her to wear blue braces in her mouth?