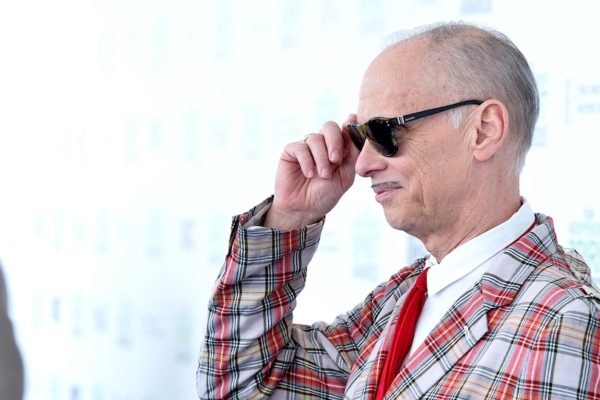 Those of a certain age may remember when hitchhiking was a thing that one (or at least one’s older siblings) might just do without too many second thoughts about it. Didn’t seem especially dangerous or anything like that. Those of a certain age may also remember when John Waters seemed very dangerous indeed, in the best way; he put things on film that made jaws drop, and before home video, you needed to go to a midnight movie to see his latest transgressive extravaganza. If hitching has come to seem more dangerous, and Mr. Waters less so as the years have gone on, what would happen if the two came together?

You can find out in Carsick: John Waters Hitchhikes Across America. Actually, you can find out three different ways; before telling us what actually happened on his cross-country hitch (yes, the 60-something Waters really did it), Waters imagines both the best series of rides and encounters that could possibly happen, and then the worst. And so the book is divided roughly into thirds: the best, the worst, and the reality.

It’s a great idea for a book, and Waters mostly nails it. The “best” section is endlessly inventive (as long as you remember that we’re talking about the best things that could happen to John Waters, not necessarily to you). The “worst” section gets a little repetitive, and probably closer to your own imagination in terms of the worst things that could happen to a hitchhiker, so not as surprising or as fun to read as the previous section.

It’s the “what really happened” section that makes the book, though. Though there’s some repetition here as well (mostly due to those days when Waters just can’t seem to get picked up), it’s mostly an interesting – even sweet – recounting of the mostly sweet and interesting people who pick John up, share a little of their lives, and eventually get him all the way from Baltimore to San Francisco.

Yes, much of the book as a whole is filthy in that Waters way, but any fan would hardly be shocked at that. What’s surprising is how much is almost heartwarming. It’s an unusual combination to be sure, and not many people could pull it off, but Waters does.

Perhaps best of all, Waters imagines (or retells, in the third section) a radio “soundtrack” of hitching or road-trippy songs, some famous but many delightfully obscure, practically inviting the reader to seek them out. Helpfully, they are recounted in a full playlist at the end of the book.

1 comment on “Would You Give This Guy a Ride?”