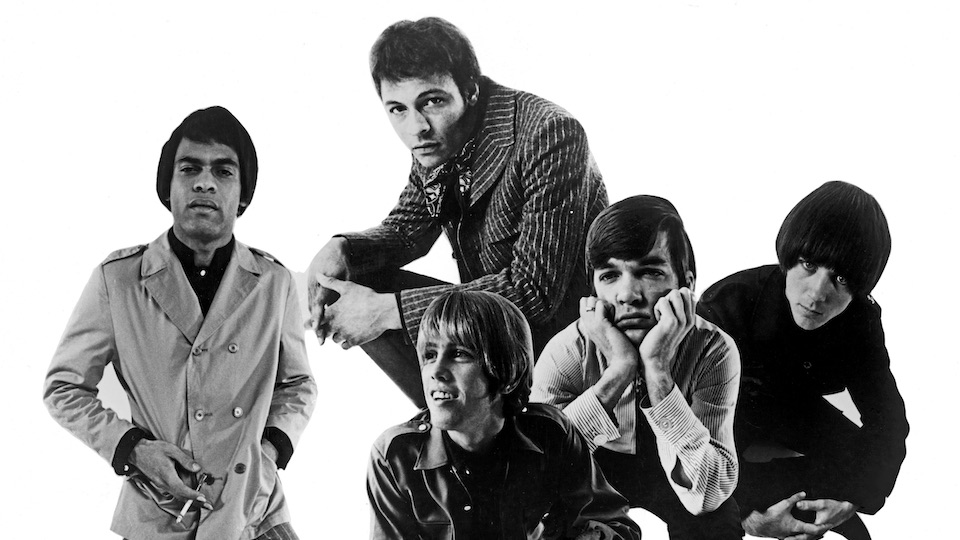 Musician Johnny Echols certainly knows something about Love. After all, he co-founded the band and his guitar-playing on their eponymous LP as well as Da Capo and Forever Changes shimmers from the orchestral to the punchy to the fervent to the erudite. Although commercially unsuccessful, that last album especially influenced British post-psychedelic groups such as The Jesus and Mary Chain, The Stone Roses, and Primal Scream. Echols actually returned to Love after a 37-year absence just in time to play with poet frontman Arthur Lee and his backup band Baby Lemonade for his last show on Jun. 23, 2005 at San Francisco’s Cafe Du Nord. With the deaths of both that band’s primary songwriters Lee and Bryan MacLean, Echols has carried on the legacy of Love in their absence. This year, The LOVE Band Featuring Johnny Echols will return for one last UK tour. It’s worth a trip across the pond to see it.

Related: “Shoegaze Is Here to Stay”

Q: The baroque pop of Forever Changes holds a place in the hearts of many musicians. Will you be performing parts of it?

A: We’re basically performing all of it! I’m with the Baby Lemonade guys and we’re doing the Forever Changes and songs from Da Capo and the first Love album, as well as some other songs.

Q: Bryan Maclean’s opus “Alone Again Or” has some marvelous flamenco interpolations. How did it differ from MacLean’s original vision?
A: It started off as a banjo piece, and the original intro would have been a banjo intro. Bryan and I were playing banjos. We were young and naive, I guess, and thought we could play this stringed instrument. It may not have made the cut if not for David Angel. He was a magnificent arranger and came up with the Mariachi horns. We worked together on the song. I was in the corner noodling away playing Spanish chords, as I do, and thought we could do in this Spanish arrangement, which went into the song.

Q: The propulsive “7 and 7 Is” pre-empted punk rock. How did you record this fiery track?
A: That was a really difficult song to record. It took us up to well over a hundred takes. Because we were playing with a live vibrato and it has specific changes and if the drummer isn’t accustomed to playing on beat throughout the entire song, he’ll get lost. We would speed up, slow down and we’d have to do it all over again. The drummers nowadays play to a click track, that metronomic beat, it plays it on a beat, it doesn’t allow for variation. We had to play it live, all of us playing at the same time, and it had to have that vibrato because that was part of the song and that couldn’t be added later. That gave headaches, so we tried and tried, but he finally came through and got it right. Our engineers Bruce Botnick and Dave Hassinger thought we should lob off instruments, so they wouldn’t bleed into the other mics. But we said we wanted controlled chaos, so it doesn’t matter if it bleeds into other mikes.

Q: Love covered “Hey Joe”; how did those lyrical alterations come about?

A: Yes, that was when Bob Leaves from The Leaves had come to me and asked if I would give him the words to “Hey Joe” because we had recorded “Hey Joe.” I was being suspicious because he was asking me and I was like, “Well why?” He said, “We’re not planning on putting it on the record, we’ll just play it.” So, being suspicious, I made up a bunch of words. They didn’t make any sense the words I made up. Stuff like “with a gun in your hand.” Los Angeles, you know! Lo and behold, they used the wrong words, so did Jimi Hendrix. It was an old song called “Don’t Take Your Love to Town,” so it kind of dwarfs into a rock song and became “Hey Joe”. It was copyrighted, so for many years, I was receiving royalties for the wrong words! It was serendipitous for a time. It worked out well.

Q: “A House Is Not A Motel” pictures a kaleidoscopic array of violent colors. Were Love responding to the Vietnam War?

Q: Yes, that song was. We were at a club in San Francisco. Janis Joplin and Big Brother were playing. They were really, really loud, so Arthur and I went to sit at the bar. I don’t mean to disparage them, but they were loud. [Laughs] The over-21s could drink so we went over to that part. And then this Vietnam soldier — an AWOL soldier — he came to sit down. He invited himself to our table and he started talking. We noticed that he had a gun. He started telling stories about that war, stories about soldiers, how you could hear them screaming out in the night, calling out for God or their parents. Stuff like mixing blood turns to grey. He said that and that became the basis for “A House Is Not A Motel.” That was a true story.

Q: The Da Capo closer “Revelation” is a protracted progressive psychedelic beast. Where did the idea for this fine song come from?

A: That goes back to a jam piece called “John Lee Hooker.” This was the first incarnation of Love. We were all at high school. We were playing like jazz artists, people like John Coltrane, they’d play on and on, extended solos. As each soloist would finish their part, he would leave the stage. The next soloist would play his part and leave the stage. Until finally the only person on the stage was the drummer. He’d play a long solo and that’s how the songs would go. We became known for that because we became one of the first, if not the first, kind of jam band. Sometimes you’d play “Revelation” for the entire night. People could get up and dance, just trip out and enjoy themselves. So, that was like our signature song. When we got to the studio, we intended to bring people, you know, the audience. The club inside the studio. The union would not allow it! We did it live in the studio. We probably did an hour of music… Paul Rothchild… it was his job to cut that down and make it into something that could make it on the album. Much of the song, you lose the context, it’s kind of a jazz composition. It’s totally different in context because all of the solos are out of time now.

Q: You’ve played “Bummer in the Summer” with Robert Plant. What did he bring to the song as a singer?

A: Robert really understands what we’re trying to do, I like him very much… He wanted to do some covers of our stuff. He wanted to sing with Arthur, but Arthur became ill and it didn’t happen, sadly. But I really like Robert, and he really likes our music Those guys [Led Zeppelin] really liked what we did. Jimmy Page noticed the fact that I had a double-necked guitar. I was probably one of the first rock musicians to play double-necked guitar, there were other country guitar players who played that guitar, but I can’t think of another rock musician before that. He came up to me at a bar one time, I didn’t know who they were, and he was questioning me things like “is it heavy” and things like that. Later, he played a double-necked guitar, so there might be something there. [Chuckles]

Q: Would you care to tell Culture Sonar about “Gethsemane”?

A: “Gethsemane” is a title I gave to a series of songs. When we made “Forever Changes,” it was to our understanding that it would be a double album. Jac Holzman, of course, has other views and disputes this… [But] Bryan and I wanted to do our songs and not just record Arthur’s songs. Contrary to what people thought, we were a group. There was no leader. We were all responsible for the music we played. Arthur wrote the lyrics. Bryan, Kenny and I with Michael Stuart, we put the lyrics to music. That’s how we created the Love sound. Not a dictator telling us: Do this and do that. We were individually talented. We felt that we should get more recognition for our input, so we were going to do a double album. When we get to the studio, we find out things have changed. The record company would no longer sponsor a double album, so we would do the second part of what became “Forever Changes” later. That’s the album “Your Mind And We Belong Together” was supposed to be a part of, which never materialized. The songs I had written for that project, entitled “Gethsemane” are projects I’ve worked on over the years and re-written and re-written again. Finally, I’m in the studio now, there are friends of mine who are helping out, putting it together, which hopefully will be out sometime in 2019, along with a book I’m working on called Just Another Day In The Life. We’ll be releasing that some time in 2019 and we’ll see what people think of it.

3 comments on “A Piece of Love: An Interview with Johnny Echols”