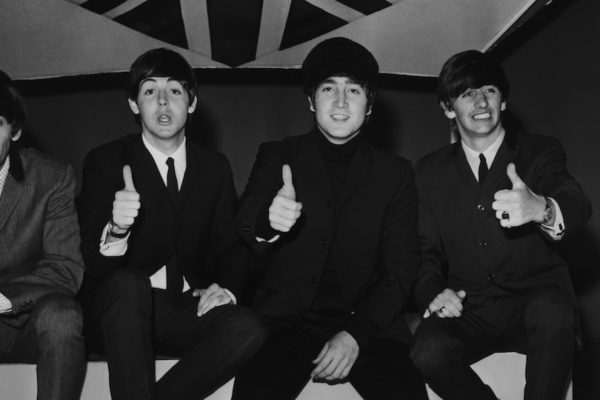 By the time the Beatles officially split up in 1970, the sales of LPs had surpassed that of 45rpm single. Even so, singles still played an important part in the record business. They were used by the record companies as a promotional tool and were used by listeners as a way to sample an artist before committing to purchasing an entire album. The Beatles had a slew of singles throughout their career, but as solo artists, John Lennon, Paul McCartney, George Harrison and Ringo Starr also released many hit songs in the years following the Fab Four’s breakup. Below is a list of the top two singles for each solo Beatle as calculated by Billboard.com.

See Related Post: Two by Four: Best-Selling Albums from Each Beatle After the Break-Up

Paul McCartney’s “Silly Love Songs,” (1976)
Things can get complicated when assessing McCartney’s solo career. Do you include Wings? Duets with Michael Jackson and Stevie Wonder? Collaborations with Elvis Costello? Well, Billboard does, which puts Wings’ “Silly Love Songs” decidedly at the top of his impressive stack of hits. Written with his wife Linda for the Wings at the Speed of Sound LP, this song’s lyrics gently chide McCartney’s critics who thought that his solo work was too lightweight. That savvy attitude earned McCartney some heavy rotation on the airwaves.

Paul McCartney’s “Say Say Say ” (1983)
Another Number One single is this collaboration with the King of Pop, Michael Jackson, who at that time had the Midas touch in music. (Yes, the song went Gold, then Platinum.)  The MTV video was just as popular as the song itself, as it showed both Macca and Jacko playing Depression-era snake-oil salesmen. (“Take take take / What you need / But don’t leave me / With no direction.”)

John Lennon, “(Just Like) Starting Over,” (1980)
As the first single off of 1980s’ Double Fantasy album, “Just Like Starting Over” secured that album in the public consciousness by holding the top spot on the chart for five weeks. Backed by a 1950s strolling shuffle-beat with state-of-the-art production, Lennon’s lyrics reflect his domestic happiness and contrasts with some of his edgier, early solo material. Although it was released approximately a month before the album and six weeks before his death, it serves as a bittersweet epitaph.

John Lennon’s “Woman” (1980)
Another incredibly memorable track from Double Fantasy is the posthumously-released single “Woman,” a beautiful tribute to his wife Yoko Ono.  (“And woman, I will try to express / My inner feelings and my thankfulness…”)

George Harrison’s ”My Sweet Lord” (1970)
Although it spent four weeks in the Number One slot, George Harrison’s biggest hit song is mostly remembered for the infringement lawsuit that followed, brought by singer-songwriter Ronnie Mack, the man behind the 1962 Chiffons number “He’s So Fine.” Harrison lost that battle which overshadows much of the pleasure of “My Sweet Lord.” Years later, let’s just appreciate Phil Spector’s top-notch production, Harrison’s earnest vocals, and one heck of a stellar slide guitar solo.

George Harrison’s “Got My Mind Set on You,” (1987)
Thankfully, no controversy surrounds Harrison’s second biggest single (which also peaked at Number One, albeit just for one week). This remake of James Ray’s 1962 R&B tune was recorded for Harrison’s Cloud Nine (1987), which was co-produced by ELO’s Jeff Lynne who ended up being one of Harrison’s future bandmates in the star-studded Traveling Wilburys.

Ringo Starr’s “You’re Sixteen ” (1973)
Ringo had quite a few hits as a solo artist in the 1970s. His two biggest, both from his eponymous album, came within a few months of each other. The bigger of the two according to Billboard is “You’re Sixteen,” a remake of the 1960 Johnny Burnette song.  Here, it’s given a retro makeover, via Harry Nilsson’s background vocals and Paul McCartney’s kazoo-like accompaniment.

Ringo Starr’s “Photograph” (no. 1, one week, 1973)
Ringo’s songs may not have stayed at the top of the charts as long as those by his fellow ex-Beatles but this one hit number one as well. “Photograph” — a forlorn tale of lost love, ranks as Ringo’s second bestseller.  It’s also from the Ringo album and co-written by George Harrison — which is probably one reason why Ringo sang a version of it at the 2002 memorial Concert for George.

Photo Credit: The Beatles with Thumbs Up by Jim Gray/Keystone courtesy of Getty Images

7 comments on “Two by Four: The Top 2 Singles from Each Beatle, Post Break-Up”