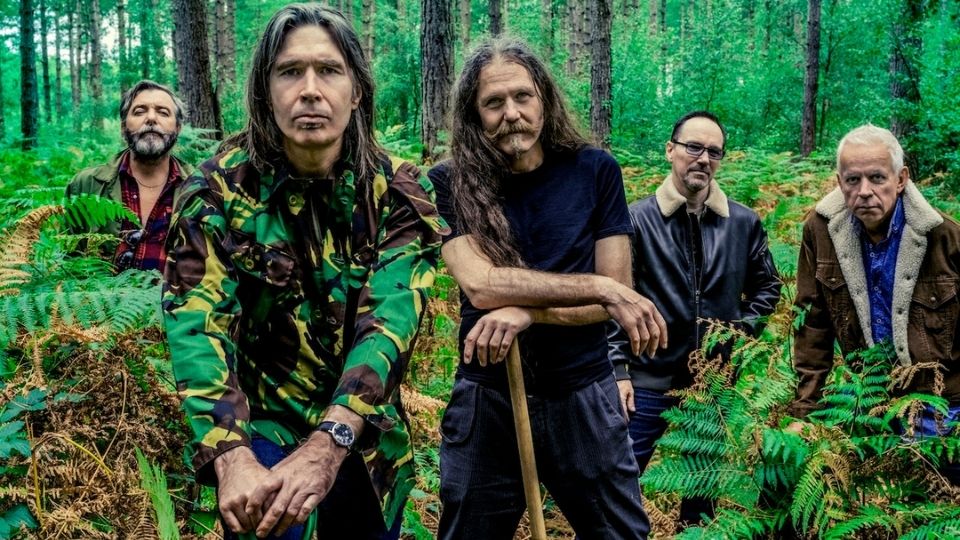 The track record of bands returning to make a new album after being away as long as Del Amitri isn’t pretty. How then do you account for Fatal Mistakes, sounding every bit as engaging and insightful as the band’s best work in the 80s and 90s? Over the course of 13 songs, core members Justin Currie and Iain Harvie join up with newer recruits Kris Dollimore, Andy Alston, and Ash Sloan to unearth the formula on which the Scottish group always relied: bouncy melodies played with sure-handed soulfulness in service of Currie’s piercing lyrics.

In a phone interview from his Glasgow home, Currie told CultureSonar how the album, the band’s first since 2002, came together, and how he overcame his skepticism about whether they could recapture the magic. Below are the highlights of that interview, edited for length and clarity.

CultureSonar: During the time that the band was on hiatus, were there ever times when you thought that there might not be another album, that maybe Del Amitri had run its course?

Justin Currie: Iain, my co-conspirator in the band, he didn’t think we would ever play again. We decided to go on hiatus in 2002 because we got dropped by Universal, which had been A&M and it has become a completely different beast. There were no offers coming in for anything. There were no deals, there were no gigs. There was not really much point in forcing it. So we just took a break, which I imagined would just be for two or three years. But yet Ian was convinced that we’d never do another gig. And then I said to Ian, you know eventually somebody is going to phone us up and ask us to do something. He said, “No, I don’t think that’s ever going to happen.” Eventually, about 2012, a couple of promoters from London came sniffing around saying, “Would Del Amitri be interested in doing Hammersmith Odeon?” That quite surprised Iain, but it didn’t surprise me. I thought we’d been away long enough that there was probably some novelty in a Del Amitri gig. From that we did I suppose what you would call a reunion tour in 2014, which was just no new songs, just doing our back catalog, which we were extremely trepidatious about because we weren’t very sure we could be very good. We got to the point where we were an OK live band by the end of the 90s. It took us about 20 years to become a half-decent live band. And we were very nervous about getting back to that speed. But as soon as we started rehearsing, I said, “This is a pretty good band.” And we were very nervous about the gigs because we were doing a sort of Enormo-Dome in Glasgow, which was about ten times the size of anything we’d ever done before. We were really shitting ourselves about that. Once we got that under our belt, we kind of relaxed. The audience just got on their feet and got us through it. And then we really, really enjoyed it. Once we got over the hump of doing this big thing, we just had a whale of time. You know, “This is great, we really missed this.” I think that’s why we decided to go back in 2018 and start writing new songs. We just really enjoyed it. There was no pressure. There was no promo to do, there was no record company, there was no tour to be promoting. It was just, “Let’s just have a laugh.”

CS: Was there a message in the leadoff track (“You Can’t Go Back”) to your fans, because, despite the title, the song says that you can indeed go back?

JC: I kind of wrote it as a Carole King, wistful, nostalgic ballad about a couple that got back together and everybody thought it was a bad idea. And then I realized that could have a double meaning, so I thought maybe this could be a Del Amitri song. We had to speed it up a bit and turn it into more of a power-pop thing. Anything that can have a double meaning of a personal, romantic thing and could also be interpreted as talking to the audience or talking about the band, that’s good. The song “All Hail Blind Love” is virtually the same idea. It’s a couple that has been through sour times celebrating their wedding anniversary. That could easily be me and Iain Harvie.

CS: What inspired the bleak elegy for England “Close Your Eyes And Think Of England”?

JC: I had the title for years, and I couldn’t find a use for the title. The title is a phrase that used to crop up in Benny Hill shows and things. Some wife would say, “I just close my eyes and think of England when I’m making love to my husband.” So it always had this slightly euphemistic meaning. I thought it would be good to use as something else. It wasn’t really until the Brexit wars that I found a meaning for it. I tried to change it to “Britain,” and then I tried to change it to “Scotland,” but Britain and Scotland just don’t work in songs. England has got more poetry to it, it’s quite weird. I was slightly nervous about it because the song’s sung from the point of view of a xenophobic racist who wants Britain to sail off into the mid-Atlantic and get away from these French and German foreigners. I was quite worried because I’m half-English. I didn’t want people to think I was being anti-English. There is a seam of anti-Englishness in Scotland which I completely abhor. But I couldn’t just find another way to get close to that small-minded spirit of xenophobia that was one of the main drives of Brexit. It wasn’t the only reason. But there was a profound nostalgia for a non-existent golden era of Britain and its great Colonial past, which as we all know, was founded on slavery. So that was my only worry when I wrote the song. But I felt the song was good enough that it could clear the way of that. Kind of like a Randy Newman song coming from an unsavory character. (Sings) “We’re rednecks, we’re rednecks” (laughs.) The people that buy Del Amitri records are totally wise to that. I meet very few people now who think that all the lyrics are sung from my personal point of view because that’s clearly not the case. Obviously, there are a few autobiographical songs about falling out of love and that sort of stuff. But most of it is a construct. It’s got to be because otherwise, you run out of subject matter. You do have to write about other people and try to get inside their shoes a wee bit.

CS: What about the sad sack in “Missing Person?” Anything autobiographical in that?

JC: The guy in there is completely heartbroken and he’s made a massive mistake. I’ve not been in that position for a long time, but I do go and sit in late-night bars on my own and just watch what’s going on, which is something I’ve really missed since lockdown. I was imagining my local bar when I wrote that and putting myself into this kind of country-and-western type character, crying and drinking type thing.

CS: How about the closing track “Nation Of Caners,” where you really get to unleash some Dylanesque wordplay?

JC: That was unusual because I wrote all the lyrics first. And I spent quite a while on the lyrics and I thought, “Well, that’s pretty good, but how the fuck do I turn that into a song?” It’s got no regular structure and no verse-chorus, and it doesn’t really have a refrain either. I thought if I just leave that written down, it’s probably going to get lost. I knew it was going to be something like “It Takes A Lot To Laugh, It Takes A Train To Cry” from Highway 61 Revisited. I just found a vamp on the piano that had that slight train-song feel. It took about 20 or 30 takes to get it right, because that one was done completely live.

CS: When you got back together in the studio, were you surprised at how it all fell back into place after so much time away?

JC: We knew that everybody in the band could play, we knew how they played, so we weren’t that worried about the makeup of the band. One thing I was really concerned about was that I knew that there was no way of capturing the energy and intensity that you have when you’re 27. You play with a kind of frenetic intensity that you cannot do when you’re 55. You just can’t do it. And that really worried me. Because I thought, well, maybe part of the appeal of those records for the audience and for me is that they were quite driven. We weren’t commercially ambitious, but we were quite ambitious to make better and better records, do things as good as other people. And I worried about getting that back. And then I just gave up and thought, you can’t get that back. It’s impossible. You just have to make the Del Amitri records that you make in your 50s. Once I got my head around that, I just chilled out about it. I thought, that’s what we sound like now, take it or leave it. The main thing to us was that other people would come in the studio and say, “Well, that sounds like Del Amitri.” That was what we wanted to do. We didn’t want to sound like Justin and Iain and a bunch of guys playing pop music. We wanted to sound like Del Amitri. Without copying what we did before, we wanted to sound identifiably like that band. When other people told us it did, that was really encouraging.

CS: How special is it to be able to add to the legacy of this band when even your longtime partner in the band doubted that it might ever happen again?

JC: I’ve always had a real prejudice about bands that either break up or stop making albums and then come back years later and make another album. Because, for me, they’re usually not very good. I think, invariably, it’s a bit of a mistake. Which is part of why I called the album Fatal Mistakes because I was begging the question “Should we have done this?” We’re being kind of coy. We’re ultimately addressing the fact that this is a problematic thing to do. The way I try to persuade myself that it’s OK is that if we carried on in those years, we’d have made four records between then and now, at least. And those records would have probably moved in a more experimental direction, but they would then have probably looped back and become something akin to this record. I think we tried to make the record that we would have made had we made the four linking records in the intervening years. It feels natural to us, but it must feel a bit unnatural to anybody who listened to the records in the 90s.