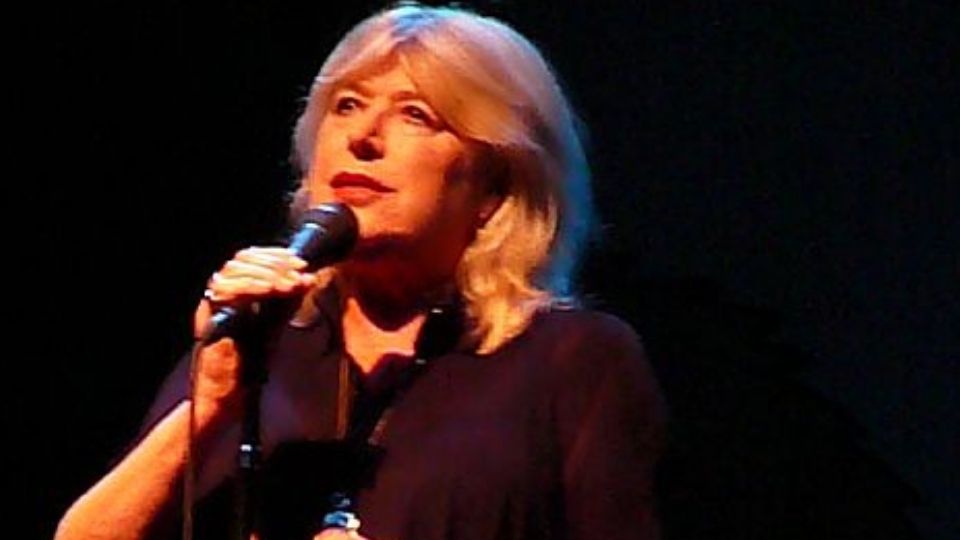 Marianne Faithfull’s new album, She Walks in Beauty is an ode to a literary love affair that began when she was a young girl studying in a convent. She was instantly drawn to the beautiful words of the Romantic poets; Lord Byron, John Keats, Percy Shelley, and their contemporaries. The album is so much more than just pulling a book of poetry off the shelf. It’s an auditory experience that immerses the listener in a land illuminated by the moon and echoing with bird songs to produce the soundscapes created by Warren Ellis, Nick Cave, and Brian Eno.

Marianne uses her voice, gilded with the sentiments of Romantic poets and the rock ‘n’ rollers of the 1960s, to illustrate the immortality of nineteenth-century poetry.

“Mad, bad, and dangerous to know,” is how Lord Byron was once described by one of his lovers, Lady Caroline Lamb. Famously flamboyant and scandalous, Lord Byron was something of a Mick Jagger during the Romantic period. On her album, Faithfull uses two of Byron’s most famous poems: “She Walks in Beauty,” and “So We’ll Go No More A Roving.”

Originally written in 1817, “So We’ll Go No More A Roving” is a farewell to youth, leaving behind the wild, late-night parties, and acknowledging the inevitable need to grow up. On the liner notes for the album, Marianne said, “It’s a lament, isn’t it? So he’s been up for days, like a Regency Keith Richards.” The last stanza, “Though the night was made for loving / And the day returns too soon, / Yet we’ll go no more a-roving / By the light of the moon,” shows the cyclical nature of life. From sexual innuendo to the spirit of the blues, Byron’s poem demonstrates that the aesthetic of the nineteenth century wasn’t all that different from the 1960s. Faithfull insightfully summed up this sentiment by explaining, “That spirit’s always been with us, it’s just that we were born in the time when they named it ‘the blues’.”

John Keats, the poster boy for “opiate chic,” long before Faithfull pulled it off in the late 1960s, is the poet who features the most in this album. She has always admired him, and even named her 2018 album, Negative Capability, after Keats’ concept of artistic beauty.

The disorienting sounds of souls crying out create the chilling soundscape of “La Belle Dame Sans Merci.” It’s one of the most dramatic and haunting pieces on the album. When she co-wrote “Sister Morphine” with the Rolling Stones in 1971, she drew upon this imagery of “La Belle Dame” as an illicit drug, which left an addict experiencing withdrawals in a hospital bed. Therefore, it was an obvious choice for her to include the poem on her album.

The Romantic tear-jerker, “Ode to a Nightingale,” is also featured on the album. The poem about dulling pain with drink and drugs reflects on mortality through the immortal song of the Nightingale. It has some of the most punk-rock lyrics of all time. Following with “To Autumn,” Marianne muses on the ever-changing seasons of life, with Nick Cave playing a piano sequence reminiscent of falling leaves.

While working on this album, Marianne contracted COVID-19, which almost killed her. Surviving to create her art was an authentically Romantic feat, but her voice was left ravaged by the disease. With the huskiness and vulnerability in Marianne’s voice enhanced by lung damage, she read “Ozymandias” by Percy Shelley. The poem describes the insignificance of material ambition, because death is inevitable, and time can dim the brightest of legacies. Through its minimalism, the music evokes the barren landscape: “the lone and level sands stretch far away.” The short lyric, “To the Moon,” is about the loneliness that the moon experiences. The second time it is read, her voice comes through an old radio as if she’s speaking from the moon or another planet altogether.

When Faithfull first heard Thomas Moore’s “Bridge of Sighs” poem in English class, she thought the tale of the young, homeless woman who throws herself off Waterloo Bridge, was about herself. Marianne maneuvered through Moore’s intricate rhyme scheme with great agility, and emotionally emphasized the heartbreaking lines: “Glad to death’s mystery, / Swift to be hurl’d – / Anywhere, anywhere / Out of the world!”

Faithfull didn’t really “get” Wordsworth when she was younger. She explained, “maybe he’s a poet you need to grow up to. I know I did.” Including both the opening of Wordsworth’s Prelude, and “Surprised by Joy,” she showcases the sentimental Lake Poet alongside the younger generation of Romantics.

She ends the album with “The Lady of Shalott,” by Alfred Lord Tennyson. The medieval-inspired lines tell the story of a beautiful, tragic woman cursed to live in a tower, only able to see the world through reflections on a mirror. After falling in love with the reflection of Sir Lancelot, she kills herself in accordance with the curse. The same “tragic woman” trope can be found in the way Marianne Faithfull, along with other rock ‘n’ roll muses, are always described. With Faithfull’s own image and history, she makes this 10-minute poem easy to understand, and exhibits all the nuances. By emphasizing the line “It is the closing of the day,” she subtly reminds us where Mick Jagger got the opening line of her big hit, “As Tears Go By”: “It is the evening of the day…”

From the Beau Brummel-style fashions to Mick Jagger famously eulogizing Brian Jones with Shelley’s “Adonais,” the Romantic era really informed the tight-knit rock ‘n’ roll scene of the 1960s – and had a lasting effect. Marianne Faithfull’s new album draws upon her life’s experiences and uses them to shape her reading of these Romantic poems. She Walks in Beauty is a glittering collection of musical nineteenth-century heirlooms, demonstrating how our poetic past is an eternal pool of inspiration and creativity.

0 comments on “Marianne Faithfull’s “She Walks in Beauty”: Romantic Heirlooms”