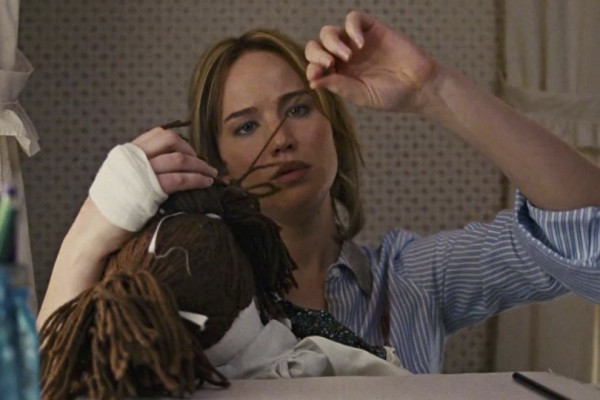 On the heels of his wildly successful films, Silver Linings Playbook and American Hustle, David O. Russell is debuting his new film, Joy, on Christmas Day. Starring his go-to dynamic duo, Jennifer Lawrence and Bradley Cooper, Joy is based on the life of Joy Mangano, inventor of the Miracle Mop and 100 other patented household items. The film traces her life from childhood (in flashbacks), through her struggle as a single mother caring for two kids, live-in divorced parents, and an ex-husband residing in the basement, to her meteoric rise as the most successful purveyor in history on the Home Shopping Network (HSN).

Joy,  the movie, is a mash-up of stark, unforgiving real-life with surreal fantasy (in the form of a parallel plotline occurring in a constantly streaming TV soap opera) and the disorienting hyper-reality of the televised home shopping world. Joy, the character, is a creative and ambitious person with big dreams who is bogged down by family obligations driven, in large part, by the lack of personal responsibility in those around her. In the ensuing David and Goliath scenario, mild-mannered Joy battles a predatory world of bad actors, including in her own family, once her first invention achieves a degree of success.

Joy’s home life has been structured to accommodate her feckless, self-involved mother, Terry, played with aplomb by Virginia Madsen, who is resigned to live her life in her bedroom in front of the TV, her critical, unsupportive father, Rudy (Robert DeNiro), and her well-meaning but deadbeat ex-husband (Edgar Ramirez). Isabella Rosselini, described by Russell as “brilliant, but frightening,”  electrifies the film, as per usual, in her portrayal of Trudy, Rudy’s wealthy, dial-a-date girlfriend and the initial investor in Joy’s business.

After a preview at New York’s Jacob Burns Film Center in December 2015,  Russell described Joy as “a quiet, benevolent power,” while simultaneously making hyperbolic references to her mafia-like toughness in overcoming the venal and pernicious influences around her. When asked what personality characteristics he shares with Joy, Russell said that he “relates to her forgiveness, her fierceness and quietness…and her perseverance.” By Russell’s own admission, Joy could easily have been a Lifetime movie, but he wanted to address the “larger questions.” He went on to say that “beauty resides in difficult, painful things. You are where you’re from…by the people that surround you…who help you and hinder you.”

Joy is played to Oscar-worthy perfection by Lawrence, who carries the entire film on her slim shoulders. In this existential portrait full of dysfunctional, unsavory characters, it’s not certain if joyless Joy ever gets her joy back but, in Lawrence’s capable hands, we’re rooting for it to happen.

PS. To see a very different side of Robert De Niro, check out The King of Comedy.

0 comments on “Discomfort and “Joy””