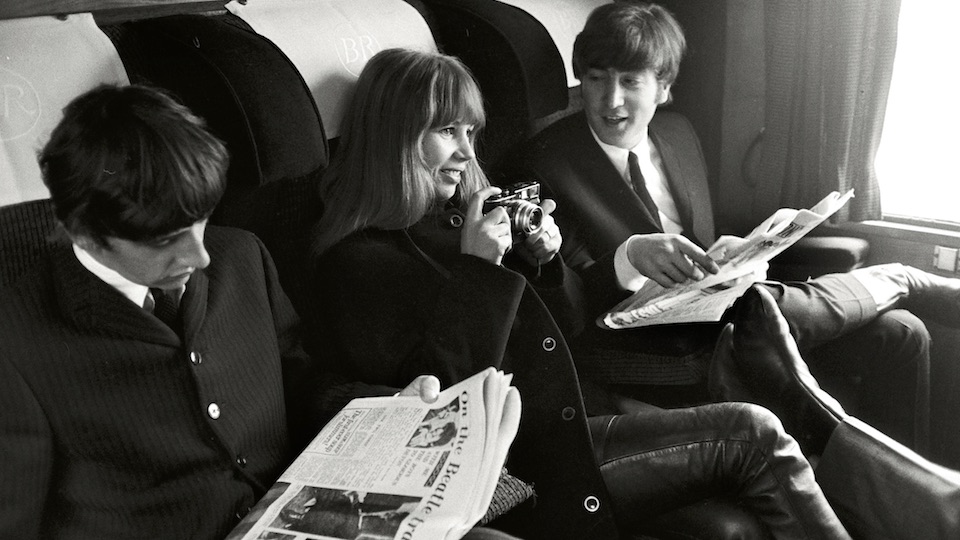 I’ve been reading books about the Beatles for over a half-century but none have spoken to me like Christine Barrett-Feldman’s A Women’s History of the Beatles. This much-needed book shows us the mission-critical role of women in transforming four talented and ambitious young men into the Beatles, and the myriad ways the Beatles have, in turn, inspired and transformed the lives of women across three generations.

Feldman-Barrett, a Senior Lecturer in the School of Humanities, Languages and Social Science at Australia’s Griffith University, is a self-described “aca-fan”—an academic who studies a cultural phenomenon of which they’re a fan. Yet you won’t find the pretentious, obfuscating prose often found in academic books on fandom. It’s well-written, respectful of the reader, and acknowledges that fandom is joyful. Focusing on female perspectives gives the book a different kind of energy that is hard to describe.

Similarly refreshing is that the book is authoritative without the attitudes of expertise or ownership that characterize much academic and popular writing about the Beatles. Despite more women of all ages participating in Beatles scholarship and commentary in recent years, Boomer men shaped the discourse and still predominate. In my 2014 book, Beatleness, I described Beatles scholarship as a conversation among male observers, and offered a sociocultural analysis of first-gen Beatles fandom that broadened the conversation; others are broadening it as well.

Scholars such as Katie Kapurch, Holly Tessler, Kit O’Toole, and Erin Weber bring new perspectives, and podcasts such as bc the Beatles and Another Kind of Mind—hosted by millennial women—expand the conversation in that medium. But A Women’s History of the Beatles does something different.

By centering women in the Beatles story, which Feldman-Barrett likens to a fairy tale, it becomes clear how the surround and support of women—fans, friends, and family—made the Beatles possible, and shows us three generations of women—musicians, journalists, academics, fashion designers, ethnomusicologists, tour guides, visual artists, DJs, and TikTok stars— whose Beatles fandom inspired a range of personal and professional pursuits.

A Women’s History of the Beatles is organized thematically rather than chronologically, though it does begin at the beginning, with the foundational support of mothers and aunties, and the unfailing devotion of female fans in Liverpool and throughout Merseyside—to whom the world owes an enormous debt of gratitude.

We’ve been looking at photos of the lunchtime scene at the Cavern for sixty years, but this book brings those photos to life while also giving us entrée into 60s girl culture on the cusp of change. We hear the voices of local women who were friends as well as fans. According to Feldman-Barrett, Liverpool had “an organic, community-oriented music scene that sometimes even suggested a familial closeness.” Such was the rapport with the hometown fans that the Beatles corresponded with some during their Hamburg residencies between 1960 and 1963. John, Paul, and George’s letters often arrived tucked into decorated envelopes—sweetly foreshadowing the band’s desire to create delight through packaging.

Feldman-Barrett suggests the Beatles’ rapport with their fans—locally and then globally—was a natural extension of their relationships with the strong, supportive women in their families who “served as role models and mentors.” Indeed, despite prevailing attitudes toward women in their Northern, working-class milieu and tales of sexual adventure on the Reeperbahn and on tour, A Women’s History of the Beatles shows that the Beatles’ “interactions with women were varied, multidimensional, and contextual.”

Many observers say there would have been no Beatles without Brian Epstein; others say George Martin was the sine que non. But after reading this book, it’s clear that Mona Best and Astrid Kirchherr come before either of them. Pete’s Mom provided a venue—even after the unceremonious sacking of her son—that positioned the band to continually expand and energize their loyal local fan base which, in turn, fueled their confidence and determination. This created a positive feedback loop that propelled them to Hamburg and their transformative residencies.

It was during a 1960 residency that the Beatles befriended Kirchherr, whose friend Klaus Voormann persuaded her to go with him to the red light district to see and hear them “mach schau.” Six years later Voormann would design the cover of Revolver, and three years after that would play bass in the Plastic Ono Band. But none of that would have happened were it not for the alluring and enigmatic Astrid, the educated, middle-class girl who wore leather and a Jean Seberg pixie cut. A musician and photographer who says Kirchherr was one of her biggest influences aptly described her as “a woman who went where she wasn’t supposed to go.”

According to Feldman-Barrett, Astrid played the role of fairy godmother in the Beatles’ fairy tale, the kindly, knowing figure who ensures good things will happen. Using her camera as a magic wand, she was the first person to take composed photos of the band; the first person to whom this idea occurred! Her female gaze showed these “Cinderlads” who they were and the Prince Charmings they would eventually be.

Feldman-Barrett writes: “Kirchherr was able to fully identify, document—and then further shape—the Beatles’ magnetic appeal. It is through her black-and-white photographs of the band that we first see the Beatles as objects of desire and Kirchherr as the ‘desiring subject.’” Even readers familiar with the story will come away with a new appreciation for Kirchherr—and gratitude for Voormann’s persuasive ability that October night in 1960.

We’ve heard hundreds of male musicians from David Crosby to David Grohl talk about how the Beatles inspired them. A Women’s History of the Beatles shows us female musicians—some famous, some not—who have been similarly inspired, and corrects the persistent narrative about girl fans liking the Beatles primarily because “they’re cute.” Readers will be surprised to learn about the Liverbirds, the four Cavern girls who started a band and opened for the Kinks, and the Rolling Stones on their early UK tours. (Check out Feldman-Barrett’s A Women’s History of the Beatles playlist here.)

Yoko, who Feldman-Barret says is the preeminent female figure in the Beatles fairy tale, “was not widely received as a virtuous maiden worthy of a princely reward. Instead, she was presented and viewed as a cunning sorceress who had Lennon spellbound.”  She was also a “godmother of punk” whose influence can be heard in numerous punk, post-punk, and riot grrrl bands.

Other important contributions of A Women’s History of the Beatles are the overlooked voices of lesbian fans—who found the Beatles attractive “irrespective of their sexual orientation”—and black fans, like the woman from the south side of Chicago who moved to the UK because of them. Another black fan recalled, “There’s something about how [the Beatles] talk about the world that has always made me feel comfortable in my own skin and made me feel like it’s okay to like what I like and be who I am.”

Beatle wives and girlfriends— Cynthia, Pattie, Jane, Maureen, Yoko, and Linda — are presented as significant figures in their own right. But Feldman-Barrett also zooms out and puts their Beatle relationships in a broader context, showing how they were role models for fans as well as exemplars of changing gender dynamics throughout the decade.

An interviewee in A Women’s History of the Beatles, born in 1981, mused on what it must have been like for fans in the 60s to watch the Beatles disrupt “the stereotype of toxic masculinity.”  We would have used different language, but the sentiment was there. Another fan, born in Argentina in 1995, hears the breaking of social convention in their early hits. This book enhances our understanding of the entire phenomenon—how it happened, what it meant, and why it will continue—by showing us three generations of women who heard, saw, felt, and embraced the permission and possibility the Beatles embodied.

8 comments on ““A Women’s History of the Beatles”: Thrilling, Never Prurient”