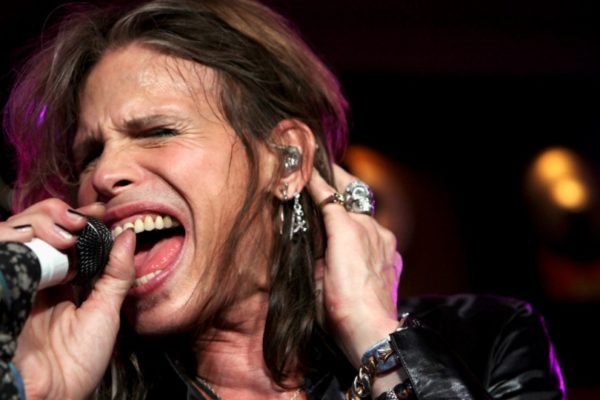 Let’s do a fun little exercise. Imagine a rock n’ roll band who just got catapulted into international stardom by their latest two albums. Parties, drugs, booze and groupies are now the order of the day. Add extensive touring and press coverage to the mix, as well as the toll all of this takes on the interpersonal relationships within the group. Now imagine their manager comes up with this idea for the next album: the band would relocate in an abandoned convent as a mean to keep them away from the show-biz excesses. What happens next? All recording sessions are done in an atmosphere of complete uncontrollable mess, and not so much as a unit, but with each individual member popping into the studio to add his own part.

Do you have this picture in mind? Because if you do, and if you’re also familiar with Aerosmith’s previous material, you’ll have a fairly accurate idea of what Draw the Line sounds like. The compositions are arguably inferior, with the Tyler/Perry song-writing team credited only with three of them. The production is messy and muddy, especially when compared to the rather “clean” heaviness of Rocks. Yet, having said all that, all of these complaints and many others somehow seem to become completely null once you really get into the spirit of the album. Let me explain: the Aerosmith of the 1970s were not the family-friendly, MTV-hit machine that they would become in the next decades. Sure, they were still popular, but their music always had a certain dose of threat, darkness and heaviness that gave them an edge. When Steven Tyler screams his lungs out in the album-opening title track, it really does sound like he’s exorcising some personal demons as opposed to just abusing a gimmick. Add that to another instantly-memorable Joe Perry riff and what you get is a fine, fine piece of 70s hard rock.

None of the other songs on Draw the Line really reach that level of intensity, but most of them have something to offer. “Get It Up” may be at first remembered for Tyler’s hooky chorus, but its real foundation is the riff the band locks into – both funky and heavy at the same time. “Critical Mass” may sound like a “critical mess” at first, with those astral guitars that keep fading in and out and the really buried vocals, but I’d take an entertaining mess over a calculated but predictable success any day. And the underrated “The Hand That Feeds” and “Sight for Sore Eyes” both just gleam with energy and enthusiasm which ultimately transcends any compositional flaw.

No ballads are featured this time around, but instead we get something that is perhaps even more outside of Aerosmith’s comfort zone – “Kings and Queens,” an obvious nod to the prog rock scene both lyrically and musically. And a convincing one at that, with a sense of urgency given by the speeding of the tempo, an emotional guitar solo after the climax, and finally, a haunting coda with Tyler’s overdubbed screams and moans. Less ambitious but equally charming is “Bright Light Fright” – Perry’s solo spot and another glimpse into the band’s life at the time: “It’s the dawn of the day and I’m crashed and I’m smashed / As it is I’m feeling like my chips are cashed.” Draw the Line as a whole is indeed a crashed and smashed album, but hey, who’s to say that rock ‘n’ roll needs to be sober and in good shape in order to work? And as far as I’m concerned, Aerosmith were one of the bands that best summed up the genre’s attitude during the 1970s, and this is definitely one last success for them before things really started going downhill.