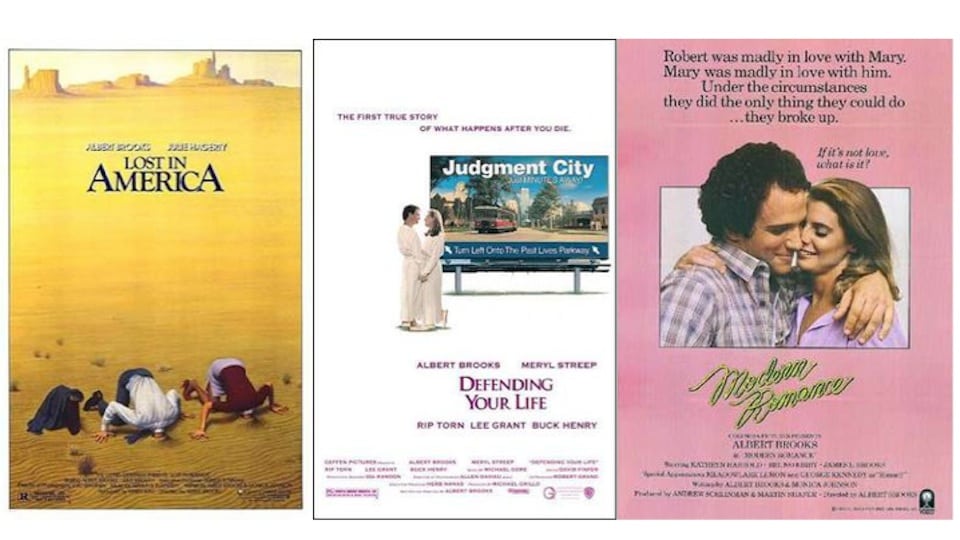 Millennials may recognize Albert Brooks as the voice of the over-protective clownfish Marlin in Finding Nemo (2003) and Finding Dory (2016), but to GenX-ers like myself Brooks is a post-modern comedian — on par with Steve Martin and Chevy Chase — who made memorable turns in Taxi Driver and Broadcast News. Think of him as Woody Allen minus the whole marrying-your-ex-girlfriend’s-adopted-daughter thing. Check out his oeuvre while it’s streaming on Netflix. We’ve ranked them below in order of urgency.

Real Life (1979)
His first feature is one of the best mockumentaries of all-time, right up there with This is Spinal Tap and Waiting for Guffman, and stars Brooks as a smug Hollywood type making a documentary about the Yeagers, an ordinary all-American family. After Warren Yeager, a veterinarian, screws up a horse operation and his wife Jeannette’s grandmother dies, the fictional director intervenes (at one point in a clown suit) to reinvigorate the family and save the movie. In our current reality show saturated environment, where producers manipulate “real housewives” and Kardashians manipulate everyone, Real Life is very much of the time.

Lost in America (1985)
Parodying the post-hippie dream of dropping out of society to find yourself, Lost in America follows David and Linda Howard as they — inspired by Easy Rider! — sell their worldly possessions and take to the open road in an RV. They leave Los Angeles with visions of self-actualization but only make it as far as Vegas before their nomadic dreams unravel. In this post-flower-child search for meaning, this road trip comedy lampoons the bohemian ideal of the impoverished wanderer and suggests that maybe a job, a house, and a stable relationship aren’t so bad after all.

Defending Your Life (1991)
Co-starring Meryl Streep as Brooks’ afterlife love interest, this satire envisions purgatory as a kind of resort/courtroom/all-you-can-eat-buffet for the recently deceased. Daniel Miller crashes his BMW into a bus while belting a Barbara Streisand tune, then awakens in Judgment City to face trial, after which he’ll either go to heaven or be sent back to Earth. A meditation on being human and living without fear, Defending Your Life is one of cinema’s most original conceptions of the hereafter. Plus, everyone wears a kaftan (which is awesome).

Modern Romance (1981)
A film about modern romance in 2016 would probably focus on un-PC text messages and X-rated Snapchats. But in the early ‘80s, our faith in long-term relationships was taking a toll. Brooks plays Robert Cole, a film editor who breaks up with his girlfriend, immediately regrets it, then spirals into a neurotic nightmare of Quaaludes, disco, and late night phone calls. Brooks’ exploration of coupling not only critiques with a sensitive eye but also culminates in one of the best romantic comedy endings ever. Don’t skip the credits which include a playful slap in the face to the fantasy of “happily ever after.”

Mother (1996)
Inevitably, given his neurotic persona, Brooks took on his own mother with Mother. Here’s how it works: With a second divorce on the horizon, sci-fi writer John Henderson moves in with the woman who birthed him to better understand his “lady issues.” Debbie Reynolds gives an award-worthy performance as the titular mama who can’t understand her son’s vegetarianism (“Oh, honey, everything comes from a cow!”) and hordes a giant block of ancient cheese in her freezer. An inspired soundtrack gives Simon & Garfunkel’s “Mrs. Robinson” some updated lyrics, “And here’s to you, Mrs. Henderson, your grown son is moving back today, hey hey hey…” Surreal touches like that, combined with verbal wit, sight gags, and attention to human pathos make this a Brooks masterpiece.

The Muse (1999)
After receiving a lifetime achievement award, screenwriter Steven Phillips loses his edge and seeks out Sarah Little (Sharon Stone) to get his mojo back. She’s either an honest-to-god muse (as in daughter of Zeus) or a charlatan. A showbiz comedy with questions about inspiration, artistry, and the sanity of L.A.’s elite, The Muse features terrific cameos by Steven Wright as Stan Spielberg, the E.T. director’s weird cousin, and an over-caffeinated Martin Scorsese with an iffy idea: “I’m working on a remake of Raging Bull, only this time I’m doing it with a real thin guy. Not like normal thin, but REALLY thin. Thin and angry!”

Looking for Comedy in the Muslim World (2005)
In his last film to date, the U.S. government commissions Brooks, again playing himself, to visit India and Pakistan to decipher what makes Muslims tick, comedy-wise. Many of the best jabs come at the filmmaker’s expense, so if you’ve binged the other 6 movies on the list you’ll be in on the jokes. After admitting to seeing Lost in America, Brooks’ State Department guide confesses to liking parts but thought “the ending was tacked on a little bit… a little bit.” This remains one of the few post-9/11 movies to treat our cultural and religious divides with humor and respect, something I suspect we still need more of.

Seven films written, directed, and starring Albert Brooks are now available on Netflix. He also lends his voice acting talents to Finding Dory and The Secret Life of Pets, both currently in theaters.