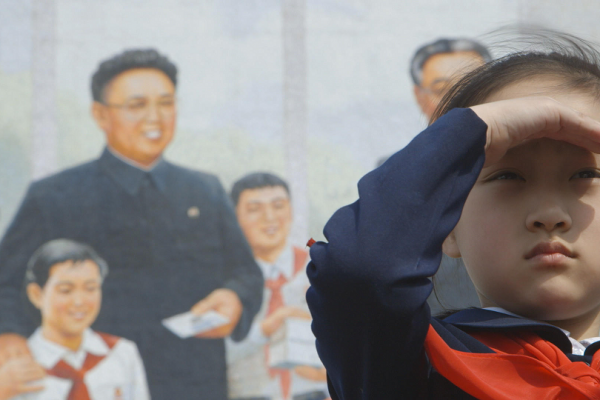 Though Kim Il-sung and Kim Jong-il don’t actually appear in person in the new feature-length documentary Under the Sun, they are very much omnipresent throughout. Their images are emblazoned everywhere in Pyongyang, North Korea: classrooms, factories, subway murals, and even on buttons worn by adults to formal occasions. It is almost as if these two men are less leaders than they are gods or even extremely watchful parents to the citizens of North Korea, which makes sense as Under the Sun primarily focuses on a year in the life of eight-year-old Zin-mi as she prepares to join the Children’s Union, a kind of North Korean-style Hitler Youth. The catch here is the government chose her and her family and gave director Vitaly Mansky a prepared shooting script and escorts for the shoot to ensure he followed their script exactly.

However, Mansky, a Ukrainian-born director who grew up in the former Soviet Union, wanted to work around the imposed censorship and give viewers a more truthful peek into one of the most guarded totalitarian states in the world, so he left his cameras rolling 24/7 in order to capture unscripted, unapproved footage. Despite the fact his North Korean government escorts would go through his footage every day of the shoot, Mansky kept duplicate SD cards of everything he shot and snuck it out of North Korea. Had he been caught, he could have been thrown in jail for months without due process of law as many foreigners are; a risk the director was willing to take to pull back the iron curtain. A risk that has now made him an enemy of North Korea, who tried to stop screenings of the film and lodged complaints against him to the Russian Foreign Ministry, a partial producer on the documentary.

The resulting film is unsettling and wholly fascinating; almost surreal in its depiction of “typical North Korean life.” Set against the austere backdrop of capital city Pyongyang with a sparse if occasionally emotionally overwrought score, there is very little of the day-to-day business of its citizens that isn’t rank-and-file. Children are made to march, group aerobics are eerily led via loudspeaker, and everyone must genuflect to statues of their glorious leaders. Even group applause is strict and orderly. Mansky and cinematographer Alexandra Ivanova rightfully use wide shots in these moments, capturing these slightly sinister large group interactions with a strange beauty.

In an effort to highlight the superiority of North Korea in every facet of society, the government escorts often shout directions to their subjects on camera telling them to smile more, be more enthusiastic, clap or shout louder, etc. A scene in a textile factory where Zin-mi’s father is scripted to work — despite being a print journalist in real life — is shot in multiple takes because the escorts are unhappy with the female workers’ performances. By keeping the cameras rolling, Mansky captures the odd humor lurking underneath this veneer of “perfection.” In one particularly funny moment (which got an audible laugh in my screening), one worker’s line about surpassing the targeted production rate changes from take to take from 150% to 200%. Accuracy, it seems, matters less here than enthusiastic propaganda.

Many of the most chilling and sad moments in Mansky’s film, however, belong to Zin-mi herself and the rest of the children. Children in North Korea are given a fair amount of attention by the government in order to be used as propaganda figures for the rest of the country to highlight the need for government “protection.” Nowhere is this demonstrated more clearly than Zin-mi’s initiation ceremony for the Children’s Union on the Day of the Shining Star (aka Kim Jong-il’s birthday). The children loudly shout their allegiance to North Korea, saluting and goose-stepping across a large gymnasium while various decorated military figures and parents proudly, if stoically, look on.

The moment is a frightening culmination of a previous scene where Zin-Mi and her classmates learn warped, fairy-tale versions of historical events, specifically the rise of revered leader Kim Il-sung during the Japanese occupation in the years following WWII. Zin-mi’s teacher drills the children on Kim Il-sung’s “heroic” actions, making them recite passages over and over again until they can do it without any mistakes. Zin-mi, though initially disinterested, grows more and more enthusiastic at the teacher’s urging. Before long, all of the children are perfectly, if robotically, reciting stories where North Korea always triumphs and the Japanese and Americans are evil, mortal enemies. Zin-mi and her classmates are slowly but surely being programmed to glorify their leaders’ agendas.

The pressure to be perfect often gets the best of eight-year-old Zin-mi, and Mansky’s unobtrusive directorial style catches these rare glimpses into her frustration, boredom, annoyance, and sadness. The fascinating thing here is no matter how hard North Korea tries to sell itself as “perfect” and “happy,” Zin-mi shows herself to ultimately be like any other average kid prone to moods and distractions. She does her best to follow instructions, but even in a highly controlled environment, children can’t always be controlled themselves.

“Don’t cry,” says one of the North Korean escorts to a weeping, visibly stressed out Zin-mi towards the end of the film, “think of something happy.” As more tears roll down her cheeks, she heartbreakingly replies, “I don’t know what,” shattering all remaining government illusions about life in North Korea. Not knowing what else to do, the child starts reciting a poem about Kim Il-sung, wiping her eyes. As the poem continues, Zin-mi’s face grows progressively blanker until all emotion has been wiped away completely. We are left with the true, “perfect” North Korean child: unfalteringly obedient and alarmingly emotionless. Mansky’s subversive documentary proves the truth really is far stranger — and sadder — than any government-mandated fiction.

0 comments on “Fleeting Glimpses of the Real North Korea”