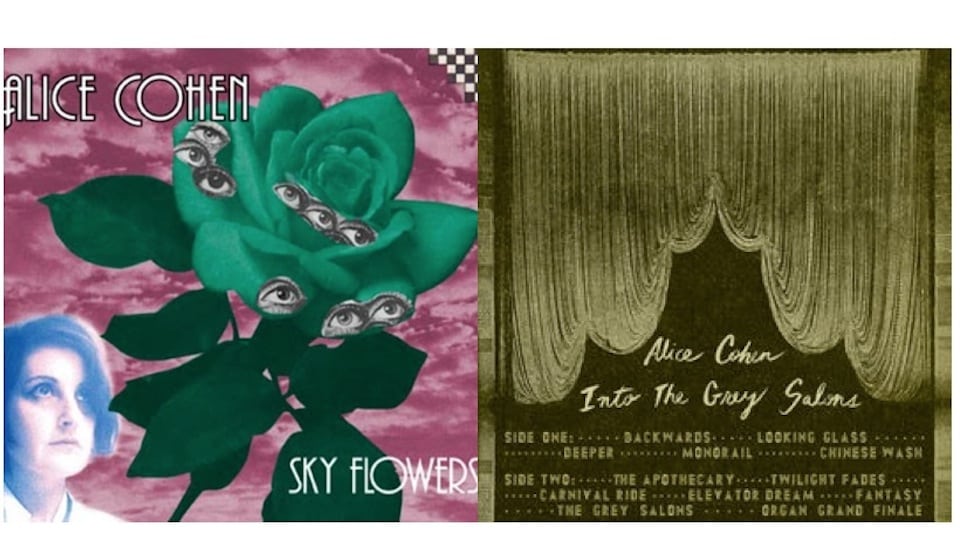 The pop music industry has a perverse love of building up idols and watching them flame out by 27. But if you’re an artist first and only happen to use pop music as a form of expression, then you can light up that medium and still have a long and interesting career. Alice Cohen is a musician and visual artist, whose approach to making things hasn’t changed much since her first days of musical success in a Philadelphia funk band called Fun City. She collects and manufactures images, colors, textures, rhythms, and sounds, then shapes and layers them into small worlds of delight. Check out some of her stop-motion animation:

The music Alice is making these days is done in the same snug NYC apartment where she does her animation. After five recent albums made at home, it’s pretty clear that this is the same Alice who wrote this lyric over thirty years ago for one of the finest pop tracks of the 80’s:

As front-gal and creative leader of the Vels, an early-80’s synth-pop band from Philly, Alice DeSoto (as she called herself) and her bandmates, Charles Hanson and the late Chris Larkin, signed with Mercury/Polygram and were teamed up with producer Steve Stanley at Compass Point Studios in Nassau. Stanley, a reggae studio legend and creative force behind the Tom-Tom Club, worked with the best US and UK acts of the 80’s: Talking Heads, B-52’s, Grace Jones, Thompson Twins, Roxy Music, and David Bowie.

Sadly, the two albums that the Vels made for Mercury, Velocity (1984) and House of Miracles (1986), have been out of print forever. In fact, they never made it to CD, let alone streaming. Look My Way, one of the tracks from the first album, had some MTV and chart success, and the Vels went on tour with the Psychedelic Furs. Not long after the second LP with Mercury, Alice and company moved on. When those records are eventually reissued (and they will be, because they are perfect gems of pop music), the Alice Cohen who painstakingly crafts cut-paper animations and creates new soundscapes in her New York apartment will be seen as the artist behind the pop star Alice DeSoto, and it will all add up.

In the meantime, check out Alice’s latest musical offering, Into the Grey Salons, inspired by the old Wanamaker’s department store in Philadelphia, complete with pipe organ. This is not Alice’s bid to create a pop legacy; she’s already done that. But if you need some pop to bring you into the artist’s inner world, here is a good place to start:

All of Alice’s recent releases can be found on her BandCamp site.