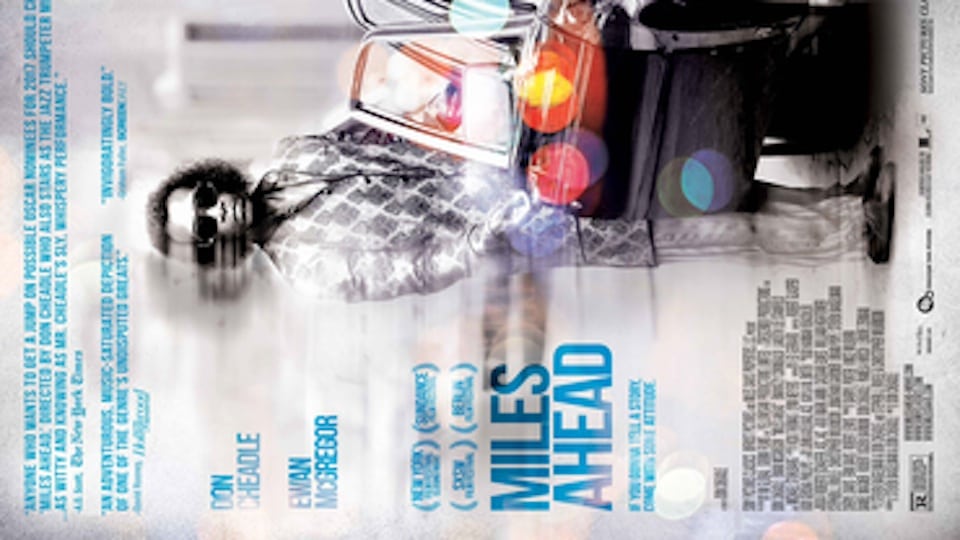 Miles Ahead, the excellent newly released Miles Davis biopic, will stay with you long after you leave the movie theater. In a mind blowing cinematic directorial debut, Don Cheadle, who also co-wrote the film and starred in the title role, captures the essence of genius in 100 minutes. Set in 1979, Miles Ahead observes a short, particularly miserable period in the life of the jazz legend, after a 5-year creative dry spell. Broadly fact-based with a healthy dose of creative storytelling, the film presents a broken Miles, after decades of drug abuse and long after the love of his life, wife Frances Taylor (Emayatzy Corinealdi), fled their marriage. Limping and mumbling to himself, he is portrayed as a cocaine-addled, paranoid recluse, wallowing in wistfulness for his lost love and resentful toward the world, especially those would profit from his talent.

The film’s 2-day timeline is framed around the theft of a demo tape of Davis’ recent music, the recovery of which sparks his renaissance in the music scene. Ewan McGregor is wonderfully cast as a hounding Rolling Stone reporter−eager for a comeback story about the “Howard Hughes of Jazz”−who weasels his way into Davis’ good graces. His duel role of conniving nemesis/sycophantic sidekick serves as a metaphor for the all the takers and users who caused Davis to shut himself away in the first place. The old adage, “Just because you’re paranoid doesn’t mean they’re not out to get you”, is ever true. Liberal use of flashbacks help weave the larger narrative of Davis’ free fall to the lowest point in his life.

The plot is merely a loose framework around the bigger story of a monumental creative spirit. Cheadle’s electric direction immerses you in the mind of a musical revolutionary and the mind-bending world of jazz. The visuals feel improvisational. Psychedelic colors, quick paced cuts and blurred action accompanied by almost constant discordant jazz, give it a hallucinogenic feel. There are car chases, surreal encounters with record executives and even a shoot-out at a boxing match. Mirroring Davis’ state of mind, the film feels tense and out of control.

With the title borrowed from one of Davis’ breakthrough albums in 1957, jazz fans might expect a history of Davis’ rise to greatness; but they will be disappointed. Perhaps this accounts for the lukewarm reviews the film has received thus far, as no other explanation is evident. Miles Ahead goes much further. The film elevates the exhausted conceit of the brilliant, broken-down artist−ruined by drug addiction and exploited by record companies−to an amusement park ride; one that engages all the senses as you wander like a frightened rabbit through the warrens of Davis’ fine, mercurial mind.

Photo Credit: Fair use image of Miles Ahead movie poster