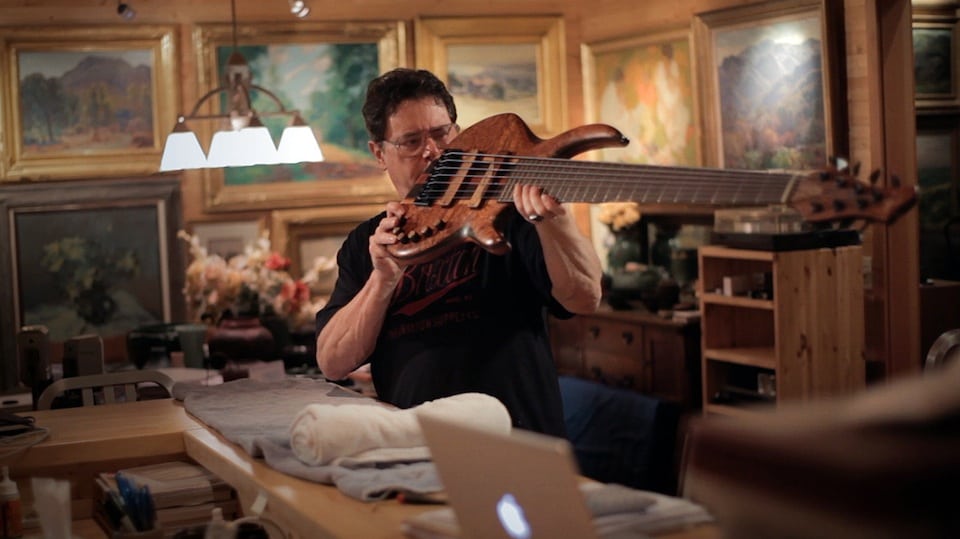 What does it take to be great? Not “great” in the sense of Abe Lincoln or Michelangelo, necessarily, but just great at – something. The answer is almost always some variation on “passion and total commitment.” It sounds good on paper, but is just so bloody hard to do in real life. A recent documentary makes the point in an unusually compelling way. On the surface, Restrung is a film about an obscure corner of the music business, where a lone craftsman hand-makes a small number of expensive electric basses beloved by the few dozen players lucky enough to get them. But, of course, it’s about a lot more than that. First, the backstory.

In 2012, filmmaker Mike Enns indulged a whim and visited the Winter NAMM show (National Association of Music Merchants). He was transfixed by the crowds and music coming from the crowded booth devoted to Randall Wyn Fullmer’s handcrafted bass guitars – especially as played by the master musician Abraham Laboriel. (Paul McCartney fans will recognize Abe’s son as the drummer in Sir Paul’s longtime touring band.)

The film’s own site does a good job describing the story that emerged from that chance encounter.

“In 2007, Randall Wyn Fullmer, an ordinary guy with a cat, decided to turn his life-long hobby into a full-out obsession. To launch his adventure, he did what anyone else would do — he quit his high paying dream job at Disney, leaving behind a successful 20-year career.”

With comfort and certainty now in the rearview mirror, he began “crafting small-batch bass guitars full time. From a beginner’s electrifying success to near break-down, this is a beautiful, honest and inspirational portrait of a passionate craftsperson who walked headlong into a foolhardy dream … a true tale of a life unwound and restrung.”

Randall turns out to be an articulate, thoughtful, self-aware observer of his own story. He sums up his POV succinctly: “If you don’t completely box yourself in, then you run the risk that — at some point — common sense is gonna enter the picture and it will defeat your Mad Plan.” Therein lies the essence of the film. He absolutely went “all in.” He teetered at the edge of ruin. He scrambled through some very tight spots – all the while refining his skills. You can literally see him soaking up energy, recharging his virtual batteries, when he sees his creations come to life in the hands of great musicians. That’s a great payoff, of course, but the film is also clear-eyed about the practical side of this journey, too, which is not nearly so poetic.

Anyone who has succumbed to a passion – from artists to entrepreneurs – will recognize themselves in Randall. Not all of us have his courage, or his talent, but we can all be inspired.

0 comments on ““Restrung,” the Movie: The Pain and Pleasure of Going “All In””