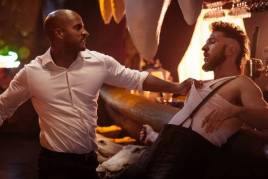 Do you believe in God? If so, which one? Humanity has worshiped countless deities over the years, ever since primitive man first tried to explain away the thunder. In blockbuster novel American Gods (2000), the author wondered what if all those gods were real, but only as much as they were believed in? What would happen when people lost faith? It’s a premise that allows Gaiman to play with his favorite themes and topics, from high adventure to cultural history to the human condition. It’s also a great premise for a TV show, something that Starz clearly recognized, having picked it up as a series for 2017. So the question is, should you read the book before the new series hits your DVR queue?

While an increasing number of movies and TV shows seem based on source material these days, not all the sources are worth digging into. Do you really need an explanation about why Dr. Goodweather is bald on FX’s The Strain? Or a version of True Blood‘s Sookie without the southern accent? We’re guessing not. But American Gods is different, a masterpiece that stands on its own merits, and a high point in the career of Gaiman, who has long since surpassed mere mortal status, and become a revered brand name, like Stephen King and J.K. Rowling.

In case you didn’t know already, Gaiman first made his name as the writer of the long running Sandman comic book title for Vertigo. In it, he told the story of the King of Dreams, who weaved his way through a world of gods, demons and devils. Not one to skim the surface, Gaiman delved deeply into our shared cultural history, creating a masterwork of such detail that an annotated version was required. Gaiman’s talents lie in using our historical beliefs to create new stories and new characters. American Gods picked up where Sandman left off.

The book itself is about Shadow, an ex-con who gets caught up in the web of Wednesday, a manifestation of the All-Father Odin, after losing his wife in a particularly gruesome car accident. He agrees to be the God of gods’ right hand man, as he wages war against a new set of deities that have taken over modern America’s imagination. Gods representing Media, the Stock Market and the Internet are the way of the world now, and they’re sick of these old school supreme beings hanging around, picking off prayers meant for them. That leads to the inevitable. War.

This is an epic story, which takes us behind the curtain of reality, while never losing touch with the man at its core, a lost soul trying to find meaning in his increasingly empty life. The television adaption, which is being spearheaded by acclaimed show runner Bryan Fuller (Hannibal), is sure to take the intersecting themes even further. If you’re a fan of genre fiction, history or just a good page-turner, this is a book you don’t want to miss, or have spoiled by your new, favorite TV show. What other novel will teach you how to do complicated coin tricks and makes you lust for a rotting corpse? Do yourself a favor and make this your holiday season read.