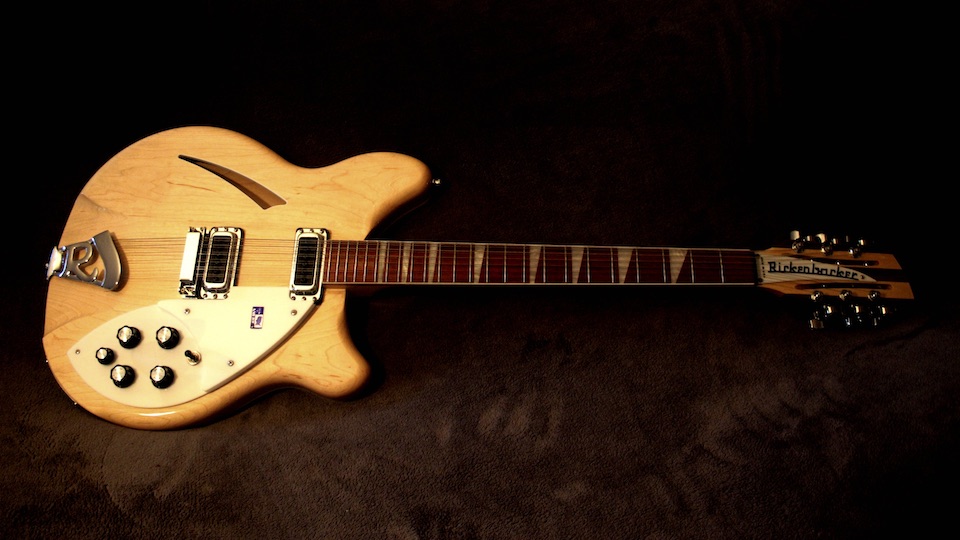 We all know that guitars dominated the 60’s and 70’s sound. The Gibson Les Paul model was for the heavy stuff, and the Fender gave the blues and country folks the right amount of twang. And then there was the Rickenbacker. Not just another brand, the Rickenbacker was the sound of a generation. It was a fluke that got this guitar to that lofty level — with some love from a Beatle.

Swiss engineer Adolph Rickenbacker emigrated to the United States with his family and settled in Los Angeles in 1918. He eventually changed his surname spelling to the more American Rickenbacker, and by 1927, he and two partners founded the Rickenbacker Manufacturing Company. Intending to produce “electric Hawaiian guitars,” by 1931, they were producing 50 units a day.

Their early aluminum and steel-based instruments were nicknamed “Frying-pans” because of their long necks and small circular bodies. Rickenbacker guitars were the first known steel-based solid-body electric guitars in the world, using single pickups with two magnetized covers shaped like a house shoe. At this point, it was not a pretty instrument.

Related: “Has Technology Killed the Guitar?”

Perhaps this is why Rickenbacker and his partners began to experiment with wood-bodied Spanish guitars and solid-body designs. They eventually created the “Electro Spanish Model B” in 1931. A unique feature of this model was the world’s firsthand-operated vibrato (the forerunner to today’s Whammy Bar), along with the fingerboard joined to the body at the 17th fret, allowing much greater access to the higher notes.

The final touch would come in 1956 when Rickenbacker would abandon making steel-based bodies altogether and introduced a wooden “neck-through-body construction.” That is one single piece of wood from the neck across the central body selection. This change not only assured a special sound from the instrument, (soon known for its unique bright jangle and chime sounds) but also gave the “Rick” the distinctive and attractive look we know today.

A freak chance of pop magic happened when 20-year-old John Lennon acquired the Rickenbacker 325 on credit payments at a Hamburg, Germany music store in 1960. It was his first American-made guitar, although he initially believed he was playing a German-made guitar due to its name (he had been playing the Hofner Club 40, which John dubbed, “Club Footie”). We can see John holding the Rickenbacker in Astrid Kirchherr’s famous fairground photos of the band in November of that year.

John fell in love with the instrument and confirmed this a few years later: “The Rickenbacker is the most beautiful guitar – the action (the amount of pressure required to push on the strings) is ridiculously low!” It would be the guitar the world would see John play exclusively over the next four years, just when the Beatles were propelled to world fame. Not known at the time of John’s purchase in 1960, the 325 model was targeted by Rickenbacker for discontinuation due to its poor sales. Soon the Beatles’ fame would save its fate.

When Beatlemania spread throughout the world, culminating in the Beatle’s 1964 visit to America, the Rickenbacker would be spotted by millions of musicians and would-be pop stars. Many of the new 60’s bands mimicked their new heroes and went out and purchased anything that looked like the 325. Their initial motivations were sometimes grounded in wanting to simply look like the Beatles did on The Ed Sullivan Show.

Roger McGuinn of the newly-formed Byrds would later say his “Rick” experience began with A Hard Day’s Night. “We saw Lennon with a little Rickenbacker 325, and George with this other guitar (also a Rickenbacker) that looked like a six-string from the front. But when he turned it sideways you could see six more pegs sticking out the back. I said, ‘ah, that’s an electric 12, and really cool!’” That sparked their band’s interest in the Rickenbacker sound and eventually used in dominance on the Byrds early recordings (“Turn Turn Turn” and “Mr. Tambourine Man”).

Even George Harrison (a Gretsch devotee) would fall to its appeal, purchasing the 425 model when visiting his sister in America, and later, bringing forth a new sound for the band when purchasing the Rick 360- 12 string guitar in 1964. This started with his big Rickenbacker chord to open “A Hard Days Night,” (both he and John on Ricks, stroking an F major with an added G to the cord). George progressed with the jangly sound found in his song “If I Needed Someone” and later had his Rick chime like a bell to open “Ticket To Ride.”

(There are seemingly countless others Beatle examples of the Rickenbacker in use – i.e. “You Can’t Do That,” “Words of Love,” “What You’re Doing,” “I Call Your Name”).

With the Rickenbacker becoming the sound of the 60s, the company was ecstatic and soon found itself not being able to fill orders fast enough. They made sure they would annually (and freely) give the Beatles their latest models for their use and opened a Beatles line of products in the UK. Soon, even Paul would put aside his famous violin Hofner bass to use a gifted Rickenbacker 401S bass guitar.

Although the Beatles would break away and use other brands of guitars as the’60s progressed, the Rickenbacker was now a staple for all things rock and roll. Beyond the Byrds, the top players of the brand became a who’s-who of Rock and Roll royalty:

The Who- That’s Pete Townsend playing a Rick in “Can’t Explain,” “The Kids are Alright” and “The Seeker.”

The Animals- That house in New Orleans called “The Rising Sun” has nothing but Rickenbacker to hold it up for the entire first verse.

Tom Petty- Countless uses of the Rick including the guitar’s famous jangle sound ringing out at the opening of “American Girl.” And yes, that is Tom holding a Rickenbacker 360 12-string on the cover of 1979’s Damn the Torpedoes.

XTC- Andrew Partridge creates some of the finest arpeggios in their 1986 hit “Dear God” and makes it ring on 1992’s “The Ballad of Peter Pumpkin Head.”

Elvis Costello– The guitar’s familiar ring tone comes out in his 1989 recording “This Town,” and that is none other than Roger McGuinn on 12-string and Paul McCartney on Rickenbacker bass.

R.E.M – In the era of Eddie Van Halen, Peter Buck came from the other side of the spectrum to reinvent the jangle arpeggio with his beloved Rickenbacker. (“We Walk,” Welcome to the Occupation,” “Radio Free Europe,” “Driver 8”).

Stone Temple Pilots- Their highest-charting single, 1999’s “Sour Girl,” was showered with the Rick sound in every chorus.

U2- The Edge is known for his self-produced sounds, but he didn’t disrespect the Rickenbacker. Examples include “Red Hill Mining Town” from 1987’s Joshua Tree.

A final story regarding the Rickenbacker guitar:

While on tour in December 1965, the Beatles had to hastily leave one venue full of fans forcing road manager Mal Evens to hastily strap two guitars to the back of their private limousine – George’s Gretsch Country Gentleman model and John’s prized Rickenbacker. After driving the highways 30 miles out of London, their private limo driver, Alf Bicknell, was flagged down by a trucker, who signaled Alf to pull over. The truck driver told Alf “You’ve lost a banjo.” Indeed, a cargo strap had broken and one of the guitars was lost.

A nervous Alf then worked up the guts to tell the bad news to John, who was sitting at the back of the limo with his window open. Trying to make light of the situation, the smiling Alf used the trucker’s words and told John, “We just lost a banjo!” John, thinking he might have lost his cherished Rickenbacker, looked up with a sarcastic smile and said, “Alf, if you can find the guitar, you can have a bonus.” Alf said, “Thanks John, what is it?” To which John replied, “You can have your job back!’

..…the missing “banjo” was George’s Gretsch, gone and crushed. George was not upset because by then, he had several copies to spare.