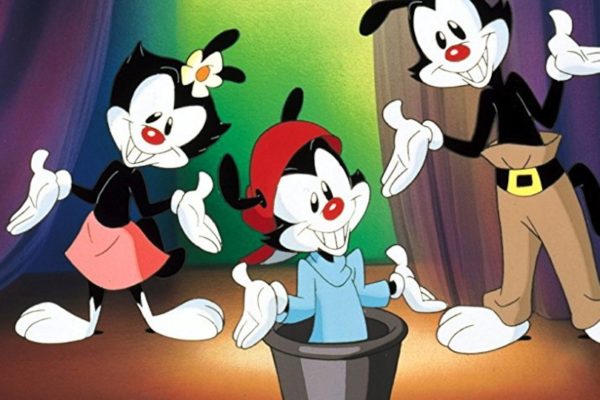 For five years in the mid-1990s, Fox and the WB aired a strangely wonderful kids cartoon executive produced by Steven Spielberg. Peppered with adult jokes, pop culture references, slapstick humor, satire, and silly catchphrases, Animaniacs became a cult favorite for kids of a certain age and a surprising number of adults. Looking back on it years later, it’s amazing the show got a green light given how – to borrow a phrase from its theme song – “zany, totally insane-y” it was. This past July at San Diego Comic Con, the voices behind Yakko (Rob Paulsen), Wakko (Jess Harnell), and Dot Warner (Tress MacNeille) reunited for a nostalgia-inducing panel that announced Animaniacs Live!, a special concert tour featuring songs from the series. Below are five good reasons to (re)acquaint yourself with Animaniacs on Amazon before that tour kicks off in California in 2017.

1. References That Pop
The five-minute cartoon “Hooked on a Ceiling” alone nods to Kirk Douglas, Ninja Turtles, Margaret Keane, E.T., Life Cereal commercials, The Wizard of Oz, Steven Spielberg, and Cole Porter’s song “De-Lovely.” Celebrity cameos/parodies are plentiful from Prince (“Dust for prints!” “I found Prince!”) to Streep to Cher. The show has referenced The Graduate, Richard Nixon, Ingmar Bergman’s The Seventh Seal, The Marx Brothers, Fiorello LaGuardia, Rudolph Valentino, Munch’s The Scream, Perry Como, Les Miserables, and even the poem “Casey at the Bat.” To say each episode is densely-packed is an understatement. It’s like a Google game waiting to happen.

2. Songs That Earworm
Animaniacs slips in quite a bit of educational content via tunes by Richard Stone and Tom Ruegger. Perhaps the most well-known is “Yakko’s World,” an impressive ode to all the countries of the world set to “Mexican Hat Dance.”  But other songs tackled the U.S. Presidents (up through Bill Clinton), time zones, state capitals, parts of the brain, and even the meaning of life.  Call it Schoolhouse Rock! for the Beavis and Butt-Head generation. At Comic Con this in July, Ruegger mentioned he’d updated “Yakko’s World” for the upcoming Animaniacs Live! tour due to changes to our global map. Cannot wait!

3. Satirical Squad Goals
Like Looney Tunes, this show has a cavalcade of characters. (Thankfully, the Emmy Award-winning opener introduces them all.) But while Yakko, Wakko, and Dot Warner are the stars, the supporting cast is equally hilarious. The Goodfeathers are a brilliant pigeon parody of Scorsese’s Goodfellas that closely mimicked Ray Liotta, Joe Pesci, and Robert De Niro while Slappy Squirrel is like Elaine Stritch as a squirrel. And with all due respect to Buttons/Mindy, Rita & Runt, etc., no one proved quite as memorable as Pinky and the Brain, two lab mice – “one a genius, the other insane.” Thanks to their immense popularity, Pinky and the Brain got their own half-hour spin-off that ran four seasons and won multiple Daytime Emmys.

4. Mighty Morphin’ Mic Talent
Rob Paulsen, Jess Harnell, and Tress MacNeille not only provide the voices of Yakko, Wakko, and Dot Warner, but also Pinky (Paulsen), the Buxom Hello Nurse (MacNeille), Dr. Otto Scratchansniff (Paulsen), and celebrities like Bob Dylan (Harnell) and Diane Sawyer (MacNeille). While Paulsen was the MVP vocalist, the show also features some of the best voiceover actors of the decade such as Maurice LaMarche (Brain, Squit the Goodfeather, Bob Hope, etc), The Simpsons’ Nancy Cartwright (Mindy), Frank Welker (Runt, Sodarn Insane, Ralph the Security Guard, etc.), Broadway star Bernadette Peters (Rita), and the prolific Jim Cummings (Daniel Boone, the Narrator). Due to its mix of songs, slapstick, and parody, Animaniacs placed a lot of its creative weight on its voice cast, all of whom more than rose to the unique challenges.

5. Fragments That Add Up
Rather than focusing on a single story for an entire episode (as was and still is the trend), Animaniacs is more like a variety show, splitting each episode up into multiple short cartoons with filler segments in between.  This gives the show a quicker pace so you’re unlikely to ever get bored. The format also allows Ruegger and his animation team to incorporate ideas that wouldn’t work in a lengthier format. As a result, Animaniacs feels like a classic cartoon in the vein of Looney Tunes without ever sacrificing its zany, modern adult humor, making it stand out from the pack in a decade rich with smart, animated programming for kids.

0 comments on ““Animaniacs”: The Wildest, Wackiest (and Smartest!) Cartoon of the ’90s”