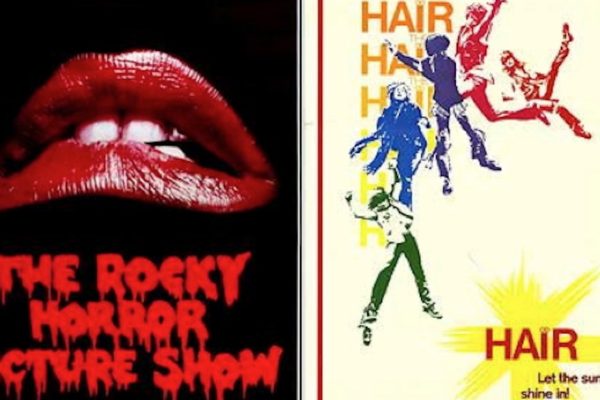 The 2016 remake of The Rocky Horror Picture Show on Fox got me thinking about the era in which it was originally released, and about another 70s movie musical addressing a particular kind of counter culture – Milos Forman’s big screen version of Hair. I think there are some interesting parallels, and also a striking divergence, between these two films and the cultural zones they stand in for and celebrate. RHPS, whatever the merits of Fox’s new version, seems somehow still relevant. Hair feels like a piece of pure nostalgia – though one that I love a lot because of my personal history. I suspect most would agree that Rocky Horror was ahead of its time (though still cautious) in its intimation of LGBT club culture, while Hair was very much looking back at the lost spring of youthful middle class rebellion.

Many will feel differently, and I’m in no way defending Rocky Horror as a piece of film craft. I find it corny, sketchily written, and mostly unfunny, with music that makes my skin crawl – but then I’m much more in tune with the weed-smoking, long haired counter culture depicted in Hair than with the androgynous burlesque of RHPS.

And yet, I think it’s pretty clear that RHPS’ version of dress-up and heightened identity has aged better than Hair’s, and that the targets of its mockery more closely resemble the kind of social conservatism that lives among us these days.

Interestingly, each film involves the entree of a pair of middle class “innocents” into a counter culture enclave that initially bewilders them, eventually winning them over and absorbing them into its ecosystem. Also, both feature a central transgressive hero whose sense of spectacle (mixed with a healthy dose of preaching) somehow transforms the conventional newcomers into more fully realized versions of themselves…after which the hero dies tragically. Consciously or not, this is uncannily reminiscent of the Jesus story.

In RHPS, it’s Brad and Janet, the hideously square and virginal couple, who must navigate for (the time) the openly sexual world of Dr. Frank-N-Furter (Tim Curry) and his cohorts. Barry Bostwick and Susan Sarandon throw themselves into their portrayals of this hapless couple, who eventually achieve salvation by liberating their libidos. Frank-N-Furter is killed near the end of the story by his butler in a denouement that is frankly chaotic and nonsensical, but does its best to wrap the whole mess up.

Hair offers, instead of a romantic couple, two unconnected naifs. Claude Bukowski is an enlistee from Oklahoma, seeing the sights in NYC on his way to training camp. He is pulled into the circle of people around George Berger, a kind of hippie guru, and their escapades also bring Sheila, a pampered but stifled young woman, into the group. A lot happens, but again we see both of the conventional figures liberated by the performative philosophizing and spectacular antics of the teacher/savior figure, who dies sacrificially at the end (in this case to save Claude from a soldier’s death).

Hair is most centrally an anti-war film, while RHPS is, if it’s about anything, a pro-sex film. It’s here I believe we can find the reason for the continued relevance of one film and the sense of dustiness around the other.

We haven’t done much about war in the U.S. since 1973. 9/11 and other factors have discouraged any serious reassessment of our military posture. There’s no denying that the peace movement which is at the heart of Hair’s story and milieu has become marginal and largely ignored.

On the other hand, the movement for sexual liberation has flourished and grown, achieving legislative victories and transforming both popular culture and the social fabric of many communities. While Rocky Horror may seem outworn and cheesy, it was definitely a boundary pusher at the time. Looking back at the people who urged me to see it, I realize that it was an anthemic film for some contemporaries who were on the cusp of more coherent social and political expressions of their LGBT identities.

Popular attitudes about war and peace are cyclical, and generations can go by without serious consideration of related issues. Sexual identity (in particular its emergence during adolescence and adulthood) is always relevant, always central to our lives, whether we acknowledge it or not. Additionally, the war machine is a deeply embedded behemoth, and it has guns and nuclear weapons. Victorian sexual repression has turned out in many instances to be a paper tiger, and attitudes and norms have changed quite rapidly for the better (though some will question whether more public sexual expression is always a good thing, which is a separate issue from personal liberation).

So I would argue that Hair was destined to be a period piece which would gradually show its age. Rocky Horror is now the longest running theatrical release in film history, and has a large international following. To hardcore fans, it borders on a religious rite, a set performance including callbacks not entirely dissimilar to responses from a congregation during a liturgy.

The reviews of Fox’s remake have been mixed. It remains to be seen just how long the original film can maintain its hold on successive generations, whether it continues to meet a need for a large number of people all over the world.

PS. You may also enjoy our posts on John Waters and Tim Burton, two filmmakers who epitomize the strange and trying to fit in. Plus, while we’re on the subject of 70s movie musicals, check out When Their Moment Came, They Were Ready for more on the Bee Gees and Saturday Night Fever.