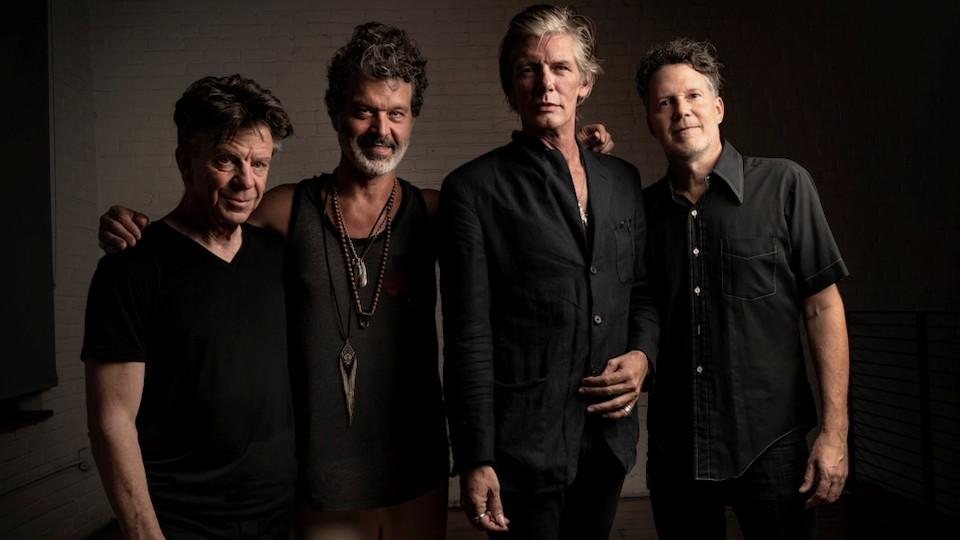 Every city known for its music scene has that one band, or three, that should have been bigger. A band armed with cutting vocals and blistering guitar mastery certainly has a shot at success. Throw in a rhythm section that would one day be enshrined in the Rock & Roll Hall of Fame and the odds take a mountainous shift toward stardom. Add songwriting prowess, a record deal, and a strong debut album and now you’re describing Austin’s very own Arc Angels. Forming a band isn’t hard. Staying in a band is something else altogether. Thirty years after the release of their one and only studio album, the guys have again reunited for a series of shows, mostly in Texas. Music fans are thrilled to see it, and as they’ve done many times in the past, they’re hoping and wondering if the Arc Angels can stay a band.

Back in the early 90s, as Jimmie and Stevie Ray Vaughan were finishing up their highly anticipated Family Style collaboration, Chris Layton, the drumming half of Stevie’s Double Trouble, strolled into the Austin Rehearsal Complex (ARC) where he happened to connect with guitarist and vocalist, Charlie Sexton. Sexton was working on a song that would become Living In a Dream. Chris listened…and dug it immediately. The song was co-written by Doyle Bramhall II, and at the time, Layton didn’t even know that the two knew each other.

Although only in his early 20s, Charlie Sexton had already lived the dream, his accomplishments mirroring the title of the song that caught Layton’s attention. About the time most teenagers are getting their driver’s license, Sexton had already collaborated with Keith Richards and Ronnie Wood for a song on the movie soundtrack of The Wild Life and released his solo debut, Pictures for Pleasure. The record would go on to spend thirty-four weeks on the charts, topping out at number fifteen. Even David Bowie recognized his talent and charisma and happily shared the stage with young Charlie. When Layton asked what he was going to do with the song, Charlie said he wasn’t sure.

In revisiting the Arc Angel’s initial formation, there’s some unpacking to do, most of it involving the connective tissue of the Austin Blues scene, which was exploding at the time. For Layton, Tommy Shannon, and Little Doyle, all roads ran through the Brothers Vaughan. Shannon and Layton of course formed Double Trouble behind Stevie Ray Vaughan and Bramhall through this father, Big Doyle Bramhall, along with his stint playing guitar beside Jimmie Vaughan with The Fabulous Thunderbirds. Charlie’s friendship with Little Doyle helped connect the four, but there was little chance of any kind of collaboration. But things changed.

It goes without saying that the tragic loss of Stevie Ray Vaughan shook the music world, but the aftershocks rumbled through Austin for years. They may still. And it’s fair to say that the Arc Angels could never have formed without Stevie’s passing. A year or so later, Robert Cray was looking for local support on his swing through Texas and, in what would be the first glimpse of the Arc Angels, the band played a forty-minute opening set. Nobody could have predicted what would happen next, but considering who was on stage that night, it wasn’t a surprise.

Things moved quickly thereafter. David Geffen signed them to a record deal. More songs were written and polished. Little Steven jumped in to produce the record and in April of 1992, Arc Angels was released to the public with stunning cover art featuring a golden-winged, blue-eyed cherub above the title. The tracks were a perfect mix of song craft, featuring dual frontmen with complimentary, but differing guitar styles. “The Famous Jane” and “Sweet Nadine: songs that showcased Sexton’s melodic, driving vocals and pop influences, balanced the more blues-infused tracks on the record.

Little Doyle’s “Sent By Angels,” one of three tracks on the album credited to him as the sole writer, blasts the band’s rock-n-roll sound, yet is touched by the blues in just the right way, all delivered by Bramhall with a voice laid back and mature beyond his years.

The closing track, “Too Many Ways To Fall,” throws everything into the mix and could be the best track on the record. And with that, the Arc Angels hit the ground running. There was a tour and promotional appearances on Leno and Letterman. The band was getting accolades in the press, and everything seemed to fall into place for the guys to make a deep run at something special.

But it was all over rather quickly. Rock history is littered with bands that can’t stay together because, well, band dynamics are complicated. As for the Arc Angels, the problem involved the usual suspects: ego, creative differences, substance abuse, whatever. Take your pick. Doesn’t matter anymore, in fact, it couldn’t. The issues that split the band initially are not what has kept them apart. Far from it. The band has spaced out reunion gigs at premier venues such as Austin City Limits and Royal Albert Hall (opening for Eric Clapton). In 2005 they recorded a set at Stubb’s BBQ for their live release Living In a Dream (2009). Over the years and up to now, there have been plenty of reunions, they just haven’t stuck. Why? It could be because the value of the Arc Angels’ individual parts is greater than the band as a whole.

Talent drives the marketplace. It’s true in every field and music is no exception. Both Charlie Sexton and Doyle Bramhall II have released solo records over the years, plenty of them. But the demand for members of the Arc Angels as studio musicians and hired guns has given the guys plenty of steady work. Bramhall has collaborated with the likes of Sheryl Crow, Roger Waters, and Elton John, to name a few. He’s been a member of Eric Clapton’s touring band for years. Sexton found his way by producing records for other artists, among them Lucinda Williams and Edie Brickell. And when Bob Dylan and Elvis Costello called and asked if he’d like to hit the road and play guitar, how could Sexton say no? Layton’s been busy as well playing with Kenny Wayne Shepherd and lending his talent to the all-star lineup that is the Experience Hendrix tour. That’s called industry demand. Unfortunately, for the Arc Angels, it’s a problem.

How could the Arc Angels stay together? Why would they? Over the years, as members were pulled apart by combined forces greater than the glue that held them together, opportunities for the band were put aside. But it’s not that they couldn’t do it. Far from it. The Arc Angels were always successful when the members were committed, but commitment is hard when there are other suitors calling. The question remains: Is doing their own thing better than all the other options on the table? Fans of the Arc Angels think so. With four November gigs left on the band’s schedule, the guys will hopefully realize how much fun they’re having playing live…together. Even in the beginning, that was always the goal.

Writer’s note: Eric Holden is currently filling in for retired bassist, Tommy Shannon. Special thanks to Chris Layton for his help with the article.

2 comments on “Arc Angels: Can They Band Together?”