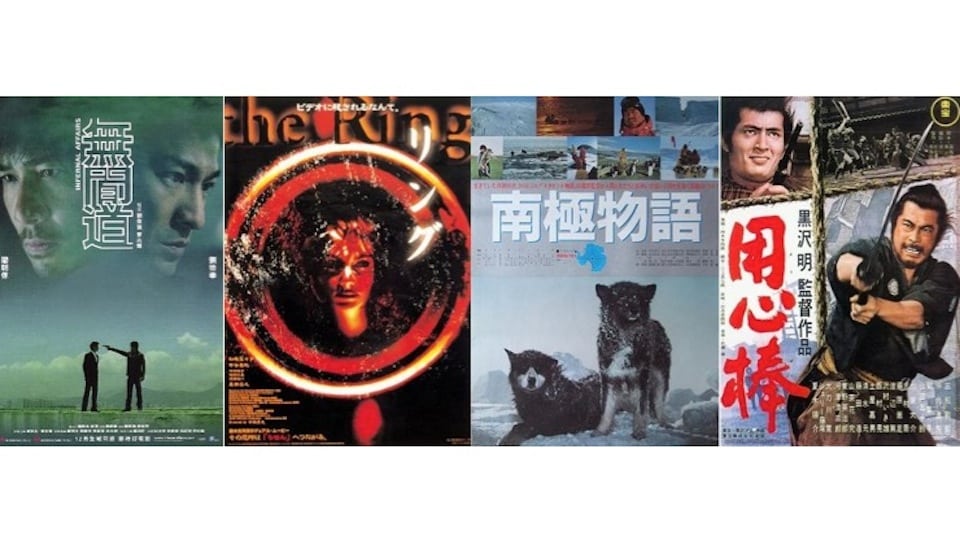 Hollywood has a long history of remaking Asian films with good reason: The original films often bring a fresh and new look at a genre in need of revitalization. Hollywood’s re-workings sometimes fly high — The Magnificent Seven (1960) and sometimes flop — Oldboy and Ghost in the Shell. But whether you’ve seen the stateside remakes or not, these ten Asian films will show you that nothing will ever quite beat the original. We’ve even separated them out according to your tastes or whatever mood you may be in tonight. (You’re welcome!)

Action: Infernal Affairs (2002)
Scorsese’s update of this Hong Kong stunner, The Departed, may have won the Best Picture Oscar, but it’s still missing two essential ingredients: actors Andy Lau and Tony Leung. With stellar performances from two of HK’s greatest leading men, this crime pic’s payoff comes not only in the action but in the emotional complexity as well. Hold onto your seats and don’t let go.

Horror: Ringu (1998)
Saw The Ring with Naomi Watts and refused to be in the same room as your TV for months afterwards? That’s nothing compared to what you’ll experience watching Ringu. The building sense of dread in this iconic Japanese fright flick makes the film’s ending all the more petrifying. Just make sure your neighbors know that you’re watching this horror film before you start streaming. Screams are sure to follow.

Horror: A Tale of Two Sisters (2003)
While The Uninvited (with Elizabeth Banks and David Strathairn) was a moderate box office success, its Korean predecessor stands as one of the highest-grossing domestic horror movies in South Korean history. Based on an actual folktale, this supernatural fright fest combines stylistically stunning visuals with family melodrama — the dinner scene alone makes it worth watching…though not by yourself.[amazon template=right aligned image&asin=B0002V7S34]

Rom-Com: Shall We Dance? (1996)
A romance about a man trying to rediscover joy in mid-life without cheating on his spouse? Yes please. Shall We Dance? literally inspired a whole generation to take ballroom dance lessons in Japan following its release. Don’t be surprised if you feel a similar urge to grab a loved one and head off to the nearest Arthur Murray studio.

Rom-Com: My Sassy Girl (2001)
Take note: My Sassy Girl released a sequel last year while the American remake went straight to DVD. The original film deservedly made mega-stars of leads Cha Tae-hyun and Jun Ji-hyun whose onscreen chemistry — combined with the charming storyline involving an engineering student and a feisty screenwriter — makes for an excellent evening of Netflix and chill.

Sci-fi: Ghost in the Shell (1995)
The complicated relationship between humanity and technology is told through the eyes of a cyborg. Taking place in a sprawling, high-tech metropolis, the original Ghost in the Shell seamlessly blends stunning visuals with excellent storytelling. Considering countless filmmakers have cited it as inspiration — the Wachowskis screened it during their Matrix pitch; Spielberg has quoted this as a favorite — true sci-fi lovers owe it to themselves to watch what the best deem the best.

Tearjerker: Il Mare (2000)
Keanu Reeves and Sandra Bullock might have charmed us in The Lake House, but the unexpected twists in this well-told love story are even better conveyed in its Korean source Il Mare. Smart, sincere, and bittersweet, this poignant romance also eliminates some plot holes introduced by the Americans. Why fix what ain’t broke?

Tearjerker: Antarctica (1983)
Disney snatched up this gem, remaking it as Eight Below. This tale of 15 sled dogs fending for themselves in the South Pole is heartwarming in both Japanese and American versions; only Princess Mononoke could break its record for domestic box office in Japan. While the Disney remake stands well on its own, the original Antarctica stays closer to the real story in terms of how many dogs survived.

Western: Yojimbo (1961)
If you think that Clint Eastwood is the ultimate tough guy, Japanese movie star Toshiro Mifune will make you think twice. Indeed, Sergio Leone’s rehash A Fistful of Dollars (1964) followed Akira Kurosawa’s film so closely, the director successfully sued him. Yojimbo would be remade again into the Bruce Willis vehicle Last Man Standing (1996), but no one tops Mifune who makes this classic about a down-on-his luck anti-hero one of the greatest films of all time.[amazon template=right aligned image&asin=B003KGBISY]

Western: em>Seven Samurai (1954)
While the first American copy The Magnificent Seven (1960) was a hit and Antoine Fuqua’s 2016 version boasts an all-star cast, nothing surpasses Seven Samurai. Trust us when we say that samurais are every bit as entertaining as guns-for-hire. Also, any film that so clearly served as inspiration for elements in Star Wars becomes required viewing.

0 comments on “Fans of Asian Cinema Know: Ain’t Nothing Like the Real Thing, Baby”