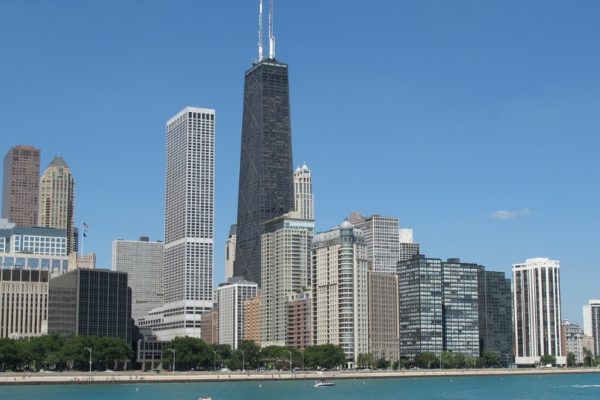 As the economic and cultural anchor of the Midwest, Chicago naturally plays an important role in rock history, too. Bands on their way up — as well as those already at the top — rarely pass at the chance to play here since the Windy City can be a relief from the hype associated with the East and West Coasts. Chi-town is a place for musicians to meet up and just enjoy the music. As such, it’s also a great city for music fans. So whether you’re playing tourist or new to town and looking to kick off your weekend with a good soundtrack, here are a few great ways to experience rock the Chicago way!

The Aragon Ballroom
The Aragon Ballroom was built next to the “L” stop at Lawrence Avenue in the Uptown neighborhood in the early 20th Century. It was a big band dance hall in the 1940s, housed a dance club called The Cheetah in the mid-’60s and started booking rock concerts several years later. The acoustics are notoriously boomy and the air-conditioning non-existent, but the space makes up for its lack of amenities with a uniquely decadent ambience. The Spanish-style architecture and high ceilings have enhanced the performances of many acts including the Rolling Stones, Bob Dylan, and the Talking Heads. For the record, “standing room only” has two meanings here.

Arcada Theatre
An old, 900-seat vaudeville venue in St. Charles, The Arcada may be an hour drive from Chicago but it’s still a Chicago establishment. Run by promoter Ron Onesti, this concert hall spotlights many up-and-coming acts (often introduced by Onesti himself) as well as The Cornerstones of Rock, a revue of Chicago bands that came out of the city’s garages and basements in the 1960s: the Ides of March, the Shadows of Knight, and the Buckinghams have all made appearances. Frankly, that’s as classic Chicago rock as you can get.

Chess Records Office and Studio
The revered Chess Records, where Chuck Berry, Bo Diddley, and the Stones recorded, is an official landmark and its address (2120 South Michigan Avenue), the title of an early Stones instrumental. Today it’s the home of the Blues Heaven Foundation, an organization — run by the family of the late Willie Dixon — providing scholarships and education in blues history. Tours are by appointment only but if you haven’t visited this shrine to pop, you haven’t truly experienced Chicago’s rocking history.

Chicago Music Exchange
So you want to be a rock ‘n roll star? Then pick up an electric or acoustic guitar at the Chicago Music Exchange. The multilevel store is a musician’s dream with a helpful staff that doesn’t give a damn if you’re a rock star or not. The vintage instruments can get pricey but there’s something here for all budgets. If you can’t make it to town, store owner David Kalt launched the website Reverb.com to provide online opportunities for buying and selling musical equipment. Consider it a form of virtual tourism.

The Metro
The Metro, a block north of Wrigley Field, is a concert venue with a dance floor and additional limited seating in the balcony. Promoter-owner Joe Shanahan started booking acts here in the 1980s, when Wrigleyville was still a low-rent area. The first band to play here was R.E.M. but Shanahan has booked thousands of acts since then including James Brown in 1986. The place is also a breeding ground for new talent: The Smashing Pumpkins launched their career here in 1988 while The Smart Bar in the basement is a long-standing dance club that helped popularize House Music.

Schubas/Lincoln Hall
Schubas is a small venue in Chicago’s Lakeview neighborhood. The long wooden bar in the front of the venue is larger than the 150-person capacity listening room in the back. That small room, however, allows an intimate experience for music fans to see acts on the rise or established artists looking to get personal. Lincoln Hall — Schubas’ partner venue a few miles away in the DePaul neighborhood — has similar bookings, holds 500, and offers food. Side note: Across from Lincoln Hall is the Biograph Theater where the Lady in Red accompanied John Dillinger to his last movie before he was shot in an nearby alley.

[amazon template=right aligned image&asin=B01LTHMF1Y]Soldier Field
There are several venues in the Chicago area for superstar acts: The United Center, Wrigley Field, etc. However, for a uniquely Chicago experience, Soldier Field can’t be beat. This huge structure built steps from Lake Michigan is magical on a warm summer night when the breeze from the lake and the view of the Chicago skyline converge just as your favorite band hits the stage. Bruce Springsteen, Pink Floyd, and Marvin Gaye all played here while U2, Metallica and Coldplay will be there in summer 2017.

Wicker Park
Liz Phair, Urge Overkill and Material Issue all literally called this place home in the 1990s. Unfortunately, The Double Door, the area’s most renowned club, lost its lease recently. But there’s still fun to be had here, a 10-minute subway ride from the Loop. There are several really good record/CD stores, including Reckless Records, The Exchange and Dusty Grove. (Yes, we know that’s technically a block south of Wicker Park.) Avenue N Guitars, an offbeat bookstore called Quimby’s, funky clothing stores Vintage Underground and Saint Alfred, and live music bars like Phyllis’ Musical Inn and Nick’s will likely have you coming back for more.

0 comments on “A Rock Lover’s Guide to Chicago”