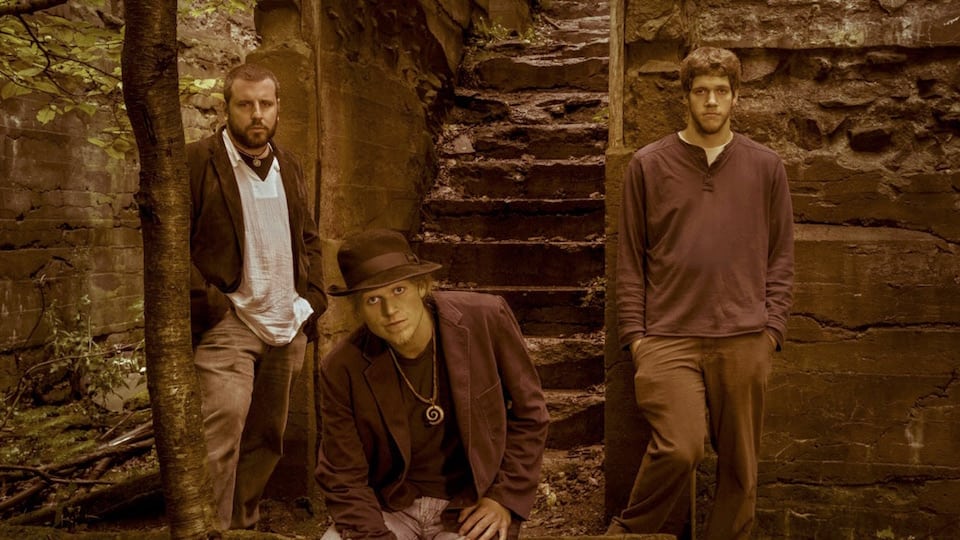 Aunt Ange’s tunes feature Tarot figures, evil vultures, and a host of other things that go bump in the night. It’s no surprise then that their 2013 opus Olga Walks Away was recorded in a haunted house. Their lush and intricate songs spring from the imaginative minds of boyhood friends Patrick O’Brien and Jack Kearney. The pair met in grade school and bonded over Nirvana, ‘90s rock and, later, Tom Waits and the films of Tim Burton. I chatted with Patrick to learn more about the spooky vibe that informs their music and what’s in the cards for the band.

Q: What was the inspiration for the fairytale characters on Olga Walks Away?

A: Jack and I and a few others were on a drive and it was cold and snowy and the wind was blowing. I saw this old lady walking with a black umbrella — very Edward Gorey looking — pushing against the wind. I looked at her and there was something profound about that moment. Something about her being in her later years but still pushing through. It was about perseverance. I gave her a name that day and did a raw recording of the song “Olga Walks Away” that night. Later, I just started to hear music for characters like the menacing Charlie the Tree.

Q: You mentioned Edward Gorey. Who are some other influences on you and the band?

A: There’s a broad set of influences within the band. Jack loves Radiohead and turned me on to Tom Waits. But I think Jack and Austin [Reese, saxophonist] and Jesse [Steffen, drummer] would agree there’s a definite fairytale influence. Visually, I always thought the early Tim Burton movies, like Edward Scissorhands and Pee Wee’s Big Adventure, were striking… I feel most comfortable writing a song that would fit into a story Edgar Allan Poe would tell. Like when you’re reading “The Raven,” what kind of music are you hearing in your head when you’re reading those words? I always hear a soundtrack to my favorite visual.

Q: On Olga Walks Away there are so many interesting sonic textures: toy piano on “Black Funeral Dress”; sitar on “Down the Rabbit Hole”…

A: Jack learned the sitar right at the moment we were recording. He wrote that beautiful sitar part for “Down the Rabbit Hole.” All the music on that album is with live instrumentation. There’s no computerized instrumentation. I think we used [recording software] Logic just for the bells on the song “Olga Walks Away,” because we didn’t have access to a xylophone.

Q: Where did you record the album?

A: We recorded in the basement of where I was living at the time in New Hyde Park, LI and…well, the house was haunted.

A: Well, I went to bed one night and turned out the lights and was just falling asleep and all of a sudden — [makes burst of flames sound] — the basement was on fire. The fire department had to be called and everything. Once I went into the bathroom and there were, like, 500 green flies just sitting on the wall not moving. Whereas five minutes before, I was in there and there was nothing. There were shadows that walked by upstairs and voices that you’d hear. My sister was in the bathroom one time and heard a voice that came up to her ear and said: “Get Out!” It was a very scary house.

A: Well, we stop short of making that comparison, because we had some great times there, too. It added to the feel of the album. We would light candles and have pumpkins around us when we were recording and it was very Halloween-esque. When there was a thunderstorm we would incorporate that into the recording. That’s on the second song, “House of Bones.” We took every element that was happening around us and put it on the album.

A: Well, since Halloween really is our favorite holiday, we always try to play shows on or around the day and this year’s no different. We’ll be playing October 26th at Rockwood Music Hall in NYC. I’m working on the graphic novel for Olga that should come out by end of the year. The band is working on songs for a new album. This won’t be a concept album, like some of the others, but it will feature even more contributions from Austin and Jesse. Jack and I are still the principle songwriters, but it’s great to have these other wonderful musicians — Austin on sax and other instruments and Jesse on drums — contributing so much to the sound.

0 comments on “Aunt Ange: Lush Tunes For All Hallows Eve”