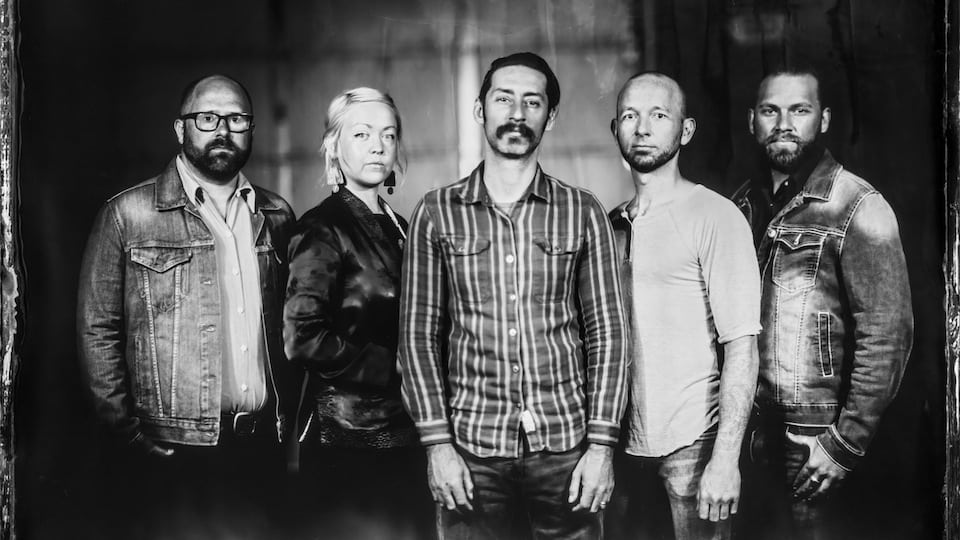 When a rock band’s been around for nearly two decades, you expect the lineup to undergo changes now and then. But what has been crucially consistent with Murder by Death over all these years (and eight albums) is the presence of vocalist-guitarist Adam Turla and cellist Sarah Balliet. Not surprising given that you can hardly imagine the band retaining its distinctly haunting sound which can summon up images of a Goth Johnny Cash hopped up on absinthe. And for the record, that’s a compliment. We checked in with Turla in light of their most recent release The Other Shore. Check out our interview below.

Q: The Other Shore‘s been described as a “space-western about a ravaged Earth” so if someone were to turn it into a movie like Tommy, who would you want to direct it?

A: Wow. Fun question. Hmm. Maybe [French director Jean-Pierre] Jeunet? He could bring a kind of sad comedy to the idea of drifting alone in space and self-reflection, plus the detail-work on the sets and minutiae would be amazing.

Q: Early songs on the album like “Alas” and “Chasing Ghosts” resonate as personal hauntings in different ways. Have you ever seen a ghost yourself?

A: No, but between doing the Stanley Hotel shows and traveling my whole life I have had some pretty spooky experiences and feelings. Whether it’s whatever story I can get going in my head or something more paranormal-ish, I have had some experiences that got me going.

Q: One also gets a feel for a love that borders on obsession at times on The Other Shore. Would you prefer to be the obsessed or the object of obsession in a love relationship?

A: In this album, I think of it more like desperation in the face of deep struggle, and love as a bond that was previously not acknowledged enough. The backdrop of the album is pretty damn dark, and love is the silver lining during tough times. Personally, I would rather not be obsessed or obsessed over, as I prefer equal footing and balance!

Q: In the past, like your whole album Who Will Survive and What Will Be Left of Them, the devil has a role while this album feels much more about inner demons. What was your religious upbringing and how has that influenced your music?

A: I grew up in an Italian household, so you guessed it: Catholic. We were the kind of Italians that had the priest over for dinner on Sundays. I have always had an interest in religion, but in the teachings over the current interpretations of dogma and the practice. I hadn’t thought of it but maybe Catholic guilt plays a role in this album! Self-reflection and working on myself has always been an interest and priority. I definitely believe in moral and social responsibility.

Q: You’ve had a yearly gig at the Stanley Hotel — best known as the site of Stephen King’s The Shining — going on six years. How did that come about?

A: Yes I’ve stayed in the haunted rooms before but folks kept knocking on the doors trying to call up the ghosts. So that didn’t work out! To start the event I just had the idea and we lobbied the hotel to give it a shot. Now it’s the most interesting thing we do every year and the hotel’s most profitable weekends. Pretty cool!

Q: Are there any songs from your days as Little Joe Gould that ever pop up on your setlist? What’s the oldest song that draws you back?

A: Not really. Occasionally we will pull out some stuff from 2001 or so but we have to plan it, as most of the band members weren’t playing with Sarah and I back then! Occasionally, we will play “I’m Afraid of Who’s Afraid of Virginia Woolf.” [Editor’s Note: This song is off of the band’s first official studio album Like the Exorcist But More Breakdancing (2002).]

Q: While your band takes its name from a Neil Simon movie, is that really your favorite film of his?

A: Ha, no, it’s very silly. I just remember seeing that movie as a kid and loving murder mysteries and it was a bonus that it was a comedy spoof. I guess it was a funnier name and had more intrigue that Clue or Columbo.

Editor’s Note: Click here to buy Murder by Death’s The Other Shore.

0 comments on “Murder by Death Gets Pretty Damn Dark”