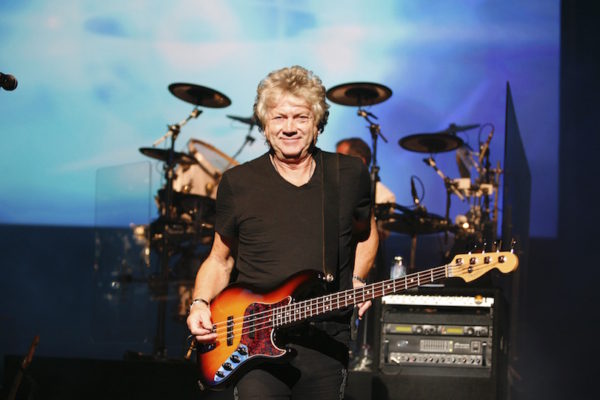 It’s a busy, wonderful time to be a member of The Moody Blues, as the band’s bassist-vocalist-songwriter John Lodge attested in a recent interview with CultureSonar. To commemorate the 50th anniversary of their landmark album Days Of Future Passed, released in 1967, the band is releasing a deluxe edition of the album and has been performing it in its entirety live, with one of those shows featuring the Toronto Symphony Orchestra, plus Jeremy Irons doing the whole “Breathe deep the gathering gloom….” bit to be broadcast on public television. In addition, the band recently received its first ever nomination to the Rock and Roll Hall Of Fame.

As if that weren’t all enough for Lodge, he has been leading a band that plays Moody’s classics on tour along with his solo material.  A live show at Birmingham Town Hall, which was also recorded for posterity and is available on CD and DVD (as The 10,000 Light Years Tour 2017), was an extra special one for Lodge. “When I was 12 and 13, I saw all the American greats, like Eddie Cochran, Little Richard and people like that,” he says. “And I saw Buddy Holly and the Crickets. I was in the front row in the balcony looking down at Buddy Holly. So with my own band, I could go there to Birmingham Town Hall, be on stage where Buddy Holly stood, and look up at that balcony and probably see another young Johnny Lodge looking down.”

When remembering how the Moody Blues made the transformation from just another British Invasion band angling for the pop charts to the one who, after adding Lodge and Justin Hayward to its lineup, formulated a unique cohesion of orchestral pomp and rock potency on Days of Future Passed, Lodge says it was all about creating a unique musical form instead of just copying an old one. “We thought, if it’s all about the blues, talking about the Delta, Memphis and Helena and all those places which we’d never been to, why don’t we write our own ‘English blues?’ Get rid of the suits. Be who we are personally. Have our own persona on stage. And write our own songs. And that’s what we did.”

Here, with Lodge’s remembrances included, is a track-by-track look back at Days Of Future Passed:

The opening of the album shocked fans who expected something along the lines of their hit “Go Now” and instead were confronted with The London Festival Orchestra and some ominous poetry. “People said, ‘What’s going on?” Lodge laughs. “The record company had no idea what to do with this. We were young, adventurous, courageous because we weren’t following any formula whatsoever. The formula in those days was 2 ½ minutes for AM radio. And we said if it takes 4 ½ minutes to write a song, we said that’s how long we’re going to use.”

“Dawn: Dawn Is a Feeling”

The band appears for the first time on their instruments on this moody piece written by keyboardist Mike Pinder and promoting a message of seizing the day. “I would think it was like an awakening for him as well,” Lodge says of the song’s meaning to Pinder. “He wanted to be a creative writer. Mike wrote fabulous songs. There’s something special about the morning. And I think that was the dawning of the Moody Blues, really.”

“The Morning: Another Morning”

This whimsical tune, which combines frolicking orchestral parts with a day-glo pop melody, came courtesy of Ray Thomas. “He sang me the song,” Lodge says of Thomas. “Ray plays flute and harmonica. He doesn’t play any chordal instruments. And so I remember him singing the song to me. And I remember getting the guitar out and playing it with him in the house. Ray has got this wonderful smiley attitude to life. It’s a childlike look on life, which is really nice.”

Lodge’s first composition on the album also provides the record’s initial burst of rock energy, and it was rhythmically inspired by a bumpy van ride with the band. “And it was giving me this kind of incredible rhythm while I was sitting there,” Lodge says. “It was probably one o’clock in the morning. And I was tapping my foot. And Graeme Edge, our drummer, was sitting in front of me. I tapped him on the shoulder and I said, ‘Graeme, how long could you keep this beat going for on the bass drum? I need you to do about a two minutes and then a break. I think I’ve written a song in the back of the van here.’ It really was a road song.”

“Tuesday Afternoon,” written by Hayward and featuring one of the band’s most indelible melodies, became an unlikely hit single in America when it was chopped in half for radio readiness. Lodge sums up its resonance simply: “‘Tuesday Afternoon’ always seems a great afternoon for everybody. I don’t know why that is. I think we’re re-energized. I think if every afternoon could be a Tuesday afternoon., I think we’d all be happy.” His own “(Evening) Time To Get Away” takes a much moodier turn [no pun intended], although the message is ultimately an uplifting one: “It’s really about, if you can achieve something every day, it doesn’t matter how small it is, it just gives you that energy to carry on and have an enjoyable life.”

This suite, with the Pinder-composed opening part dabbling in Indian mysticism and the second part, written by Thomas, finding its inspiration from Tamla Motown, demonstrates the band’s daring in juxtaposing wildly disparate musical styles. “We were trying to make sure that every song on the album had a different aspect,” Lodge says. “That was the most important thing. That every song on the album, no one could say, ‘Oh, that sounds like that.’”

On the masterpiece “Nights in White Satin,” also written by Hayward, the band nailed the quiet-to-loud dynamic brilliantly. “We said we’ve got to make it where in parts of the song, except for Justin’s vocal, you can hear a pin drop,” Lodge says. “It was really important so that the bass had its own space and the acoustic guitar had its own space in the verses, nothing else was playing. So that when the Mellotron came in, you heard the dimension.” Lodge also mentions the way the song carries a bit more heft than your average slow song. “It’s a ballad, but we wanted to have the energy of a rock song. And I think we did that. It’s become one of those magic songs with so much energy. With the soaring harmonies and the keyboard of Mike and then of course, the flute solo. I think that’s the culmination of the whole album really.

PS.  A few other “concept albums” to check out….plus, a look at another major “Prog-Rock” band.

0 comments on “Backtrack By Track: John Lodge of The Moody Blues on “Days of Future Passed””