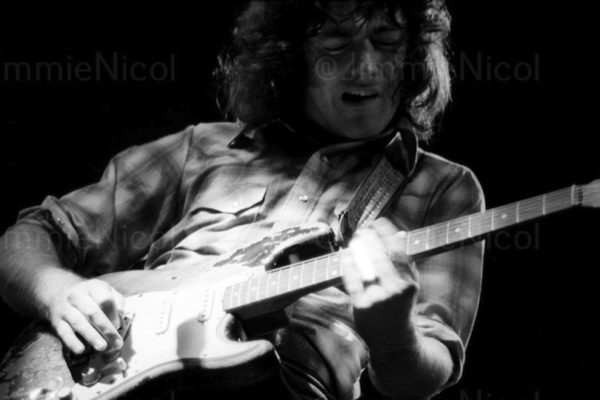 Irish rocker Rory Gallagher must have been reincarnated. Otherwise, how can you explain his almost mystical connection to the blues from another land and an earlier era? His extraordinary technique on his beat-up old Stratocaster and steel-string acoustic placed him in the higher echelon of blues-rock guitarists — regardless of country of origin. Indeed, his ability to revive the haunted spirits of muses such as Robert Johnson and Blind Boy Fuller ultimately distinguish him from the other second-generation blues guitarists like Eric Clapton and Mick Taylor. You could say that his humility and reverence helped him retain the organic spirit of the blues.

Gallagher began his musical career in an Irish Show Band, a lesser-known phenomenon stateside in which bands (bizarrely almost always consisting of seven core members) perform popular songs of the 1950s and ‘60s at dances all over the Emerald Isle while dressed in identical suits and ties. With his technical expertise and rebel spirit, Gallagher naturally outgrew the regimentation and limitations of the genre and left to form his own group in 1969: The Taste (later shortened to Taste).

Though less well-known today, Taste was a remarkable power trio of its time — one of the few worthy of being mentioned in the same breath as Cream and the Jimi Hendrix Experience. The group performed a mix of Gallagher’s originals and blues standards often unified by Gallagher’s stellar slide guitar work which was almost without peer. Taste opened for Blind Faith, and Delaney & Bonnie when it toured North America in 1969, then made an indelible mark in pop music when the band gigged the famed Isle of Wight Festival of 1970 before breaking up later that year.

Inevitably, Gallagher — a lone wolf at heart — became a solo act, releasing a barrage of excellent albums in the ‘70s, including his self-titled debut which kicks off with the up-tempo “Laundromat,” easily one of his best songs as a songwriter and musician. (The guitar solo here is classic Gallagher: uniquely complex without being the least bit unpretentious.) This song also shows off his vocals which here are impassioned, even sometimes rushed, as if the hellhounds on Robert Johnson’s trail were now nipping at Gallagher’s heels.

As strong as that first album is Live! in Europe (1972), Gallagher’s sophomore effort, captures Rory and his long-term bassist Gerry McAvoy, at their very best. Once again, the release features a winning combination of Gallagher originals and blues covers, seamlessly segueing from a Junior Wells classic like “Messing with the Kid” to Gallagher’s “Going to My Hometown” without missing a beat. Soon thereafter, Gallagher was asked to participate in The London Muddy Waters Sessions album, a tribute to one of his greatest influences. Though that overall album received mixed reviews, most critics considered Gallagher’s inspired playing the project’s highlight. This was an album that featured Steve Winwood and Steve Grech, mind you.

The decade rolled on with more excellent albums: Tattoo (1970), the Irish Tour live album (1974), and Photo-Finish (1978). That last album includes Mississippi Sheiks, a song that directly addresses Gallagher’s mystical affinity for the blues: “I saw the Mississippi Sheiks / On the corner of the street / Oh, was it just a dream / Like I’ve been traveling in a time machine.”

In 2006, a two-disc compilation came out chronicling his many appearances at the Montreux Jazz Festival in Switzerland. The first disc (highlights from 1975 to 1985) concentrates on his original material; the second disc includes his complete 1994 appearance at the festival with a good dose of blues covers in the mix. The following year, he was dead. A tireless and uncompromising recording artist is worth revisiting not just as an Irish practitioner of American blues but as an exemplar of the Celtic connection between Ireland and Americana.