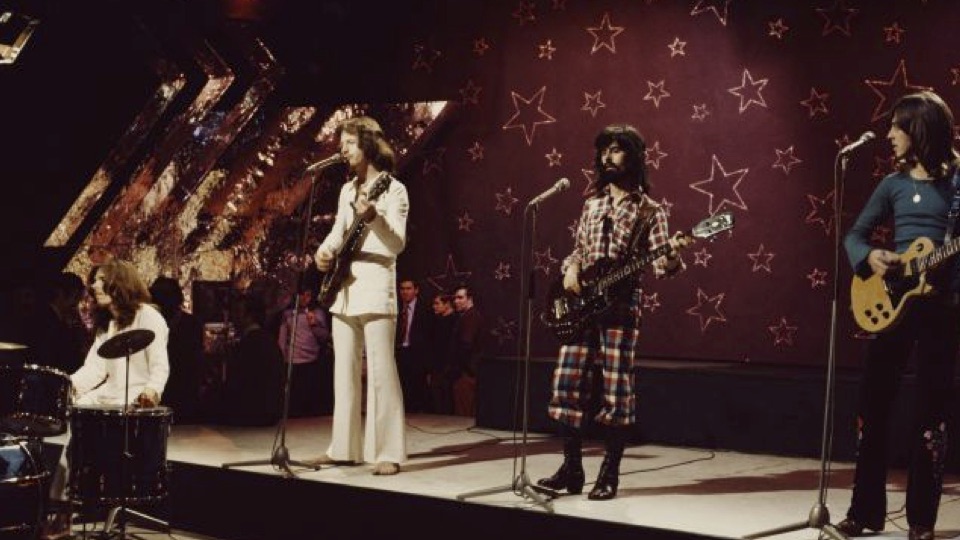 Beatle comparisons were destined to follow Badfinger everywhere. Pete Ham’s wistful lyrics, Tom Evans’ scorching vocals, Joey Molland’s infectious guitar hooks, and Mike Gibbins mercurial beat reminded many within the music industry of a certain Liverpudlian band. Their seminal singles — “Come and Get It” penned by Paul McCartney and “Day After Day” produced by George Harrison — furthered the analogies, yet the Welsh rockers maintained a “fab” quality unique to them and them alone. The tragic fates of two of its members have overshadowed much of their artistic brilliance, although Harry Nilsson’s cover of “Without You” vindicated their credentials and originality. Chris Thomas, a veteran producer who had worked on The White Album, found himself taking leadership on three of their albums, the last, Wish You Were Here, a genuine masterpiece. Thomas would find international acclaim producing the Sex Pistols’ debut. His subsequent work includes The Pretenders Pretenders, Pete Townshend’s Empty Glass, Pulp’s This Is Hardcore, and McCartney’s Run Devil Run. We had a chance to discuss his work with Badfinger.

Q: Badfinger were a terrific band. How did you get into contact with them?

It was on the Ass album. Todd Rundgren had been working with them and then, for some reason, that fell apart. I was asked to work on the album after that. I don’t know what he’s like to work with but I love the double album Something/Anything. Have you heard it? So, that’s how I got in with the band.

Q: A triumvirate of prodigious guitar players, they caught Paul McCartney’s attention. How did they come to influence “Rockestra”?

Badfinger had nothing to do with Rockestra.  Wait, I get where you’re coming from. Hmm. It was on the Wish You Were Here album, I can’t remember what it’s called, but there was a track with lots of overdubs, which we did a lot in those days. Pete was on guitar, playing something like six solos, all very comb, and paper “doo de doo doo doo.” It was like being back in the days with bands, there were solos, saxophone players, in that ‘comb and paper’ way. So, years later, when I was working with Paul, I suggested to him this idea. I wanted to deconstruct the idea. It was something like playing live and six guitars going for it. He said he had a similar idea and even had a name for it: ‘Rockestra’!

Q: Pete Ham’s wistful “Apple of My Eye” is a delicious elegy. What are your memories and thoughts on the track?

I don’t normally [laughs]. What album was that on? Ass, was it? I just thought it was a great song. I think it was about their time with Apple and all that. Great lyrics. I don’t know what the band’s situation was like before I worked with them. We had to make another album very shortly after Ass, something crazy like six weeks later. They were non-plussed about it all, a very bizarre situation. They had an American manager called Stan Polley, and the band was losing money. So then we made another album.

Q: The band’s untitled album [Badfinger] found the band writing as they recorded. How did that organic process differ from other records you’ve produced?

Basically, they didn’t have a choice. If they had no songs, which they didn’t after just making an album, then they had to write them quickly. I wasn’t involved with the writing, some guys would come in with what they had. There’s not much cohesion to that album, not a lot of direction. I like some of it. It didn’t get publicized like they wanted. Of course, we had to make another album after that. This time I got more involved with the writing and thought “we have to make the best album we can, they’ll notice us then.” It was the only way we could beat them. So, I flew back from Japan and met the band in Caribou.

Q: However mature “Song For A Lost Friend” and “Why Don’t We Talk?” sound lyrically, they’re not the easiest songs to listen to. How was morale in 1974 for the writers?

It just kept going down for them. It wasn’t great during Ass, and by Wish You Were Here, they were completely down in the dumps. Nobody ever made a penny from Badfinger. Everything was fiddled away. I think Pete was upset that he never made any money from Without You. They made no money, no, no, no, no. I was good mates with Tommy and Pete lived nearby, so I got to see them. Without You was hard for the band. None of them had anything, ascot, Bill Collins, all fiddled away. It was a horrible situation to be in.

Q: Wish You Were Here, a visit into seventies pristine power pop, might be Badfinger’s finest work. Given the cyclical nature of work, was Abbey Road a blueprint for that album?

I nicked an idea from Paul, which he used on side 2 of Abbey Road. Stitching songs together to see if it fit. It helped with the songwriting. I was thrilled with the album, though I hadn’t listened to it in forty years. My only regret is at the end of “Dennis.” Pete must have got the title from The Beano, but it’s really about his adopted son. At the end, there are two minutes of overdubs and that was my idea. It doesn’t really add anything. I recently did an edit, but the record company said I couldn’t use it, it had to be the original. I thought that was a bit cheeky of them. [The album was re-released in 2018 as “Expanded” Real Gone Music Version] The overdubs were my idea!

Q: The album closed seamlessly, effortlessly and remarkably weaves two thrilling rock tracks. Was there a conceptual reason behind this position?

I just stitched two songs together to see if it would work. I can’t quite remember, but it must have been one person had one song and another a different song. Let’s see if they work. It’s an extension of the verse-chorus thing. You can hear it on “Without You,” very clearly the difference between Pete’s part and Tommy’s. The Beatles used it on “A Day In The Life,” Paul’s part is very different from the verses. It’s part of the experiment, to see if two very different pieces come together. That’s all part of the process to see if it works and in this case, I think it did work.

Q: The album, now regarded as a classic, was relatively unsuccessful at the time. What changed in its recognition?

It came from word of mouth. That’s the way music happened back then. We didn’t have social media or anything like that. You heard it from someone else in the late sixties. Things like Love’s Forever Changes and The Velvet Underground. They probably only sold a hundred copies. I did an album with John Cale called Paris 1919. Certain people heard and loved it, and that way it developed a fanbase. It grows over ten, twenty, thirty years and when that happens, it’s much more gratifying. It’s great that people are still talking about Wish You Were Here, though I don’t think anyone made a penny from it [laughs].

Q: How do you think your work with Badfinger and their back catalog will be remembered?

No idea, I have no idea. You never know with these things. I’m just thrilled people are still listening to the band. There’s a lot of albums from that period. I think Wish and Paris 1919 are the two best, maybe Grand Hotel with Procol Harum. Talking selfishly as a producer and what I added, Wish You Were Here is the one. I hope more people get to discover that album.

7 comments on “Badfinger: A Conversation with Chris Thomas”