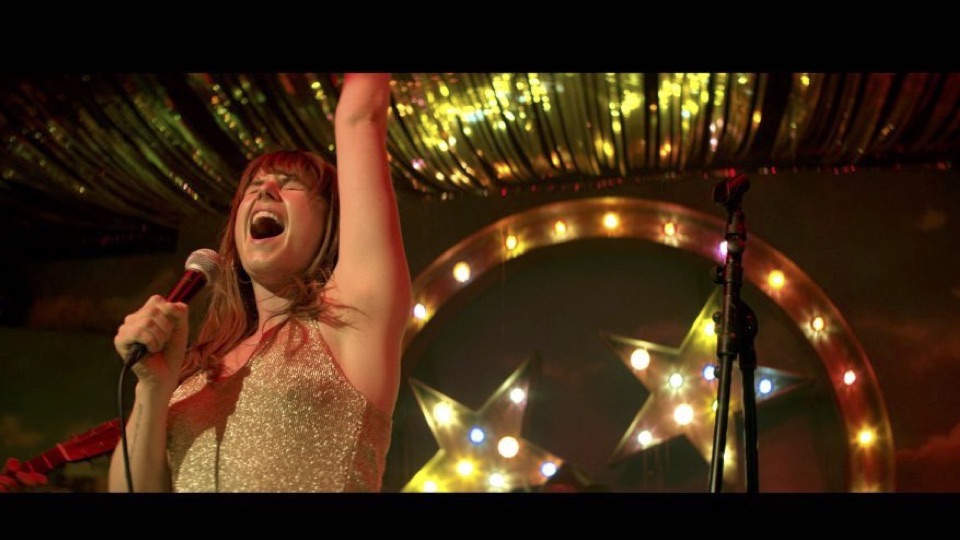 As a Texan living in the UK, it’s always slightly jarring when meeting a Country music fan from this side of the pond. On these occasions, my first reaction is always surprise, followed by suspicion. “How could you possibly understand Country’s roots?”, I wonder.  “What do you get from listening to this music as a non-American?” Ashamedly, my wariness of British Country fans has less to do with people enjoying this musical genre and more to do with my own selfish desire to keep it to myself.  Although I might now be reaching for my “brolly” before leaving my “flat” to get on the “tube”, Country music is my refuge when the rain and the smog just get too much for me, a reminder of my roots and where I come from. Having to share Country music with Brits just seems like one more way my American-ness is somehow being diluted. “You have Britpop and Punk,” I want to say, “Let me have Country.”

Enter Wild Rose, a film about an aspiring Country singer from Scotland. Not only did this film set my heart and heels thumping, it reminded me of Country’s universal relatability and its power to connect people through storied lyrics. It pulled me up by my bootstraps and gave me the much-needed reminder that Country is, in fact, for everyone.

Directed by Tom Harper and written by Nicole Taylor, Wild Rose follows firebrand Rose-Lynn (Jessie Buckley), a 23-year old Glaswegian, fresh out of jail, who dreams of making it big as a Country singer in Nashville. “You’re gonna be the next Dolly Parton” a fellow inmate calls as our heroine leaves the prison wearing an electronic tag beneath her white cowboy boots. But her ankle cuff isn’t the only thing holding her back from going Stateside. Rose-Lynn’s indomitable mother Marion (Julie Walters) wants her to get a regular paying job and support the kids she’s been minding for her daughter while she’s been locked up. When Rose-Lynn finally accepts a job as a “daily woman”, her wealthy employer Susannah (Sophie Okonedo) makes it her mission to help Rose-Lynn achieve her Country music dreams, not knowing that her cleaner with a voice of gold has much more baggage than that which can fit in a suitcase to Nashville.

Songwriting legend Harlan Howard once described the essence of Country music as “Three chords and the truth.” This is also the phrase that’s tattooed on Rose-Lynn’s arm and equally the adage that can sum up Wild Rose as a movie. While viewers might be fooled at first into thinking this film is just another three-part, hackneyed rags-to-riches tale, the narrative gets a key-change two-thirds of the way through and suddenly becomes much more than just a story about a girl with stars in her eyes.

At the heart of the movie is the idea that music can give voice to the feelings and conflicts that might otherwise be suffered in silence. This message is given true life through Buckley, whose singing reaches out through the screen and plucks the audience’s heartstrings with beautiful and affecting success. Buckley’s natural charisma and powerhouse voice give life to Rose-Lynn in a way that feels both vulnerable and defiant, made all the more brilliant when sharing the screen with Julie Walters. As Marion, Walters delivers an exceptional performance as a protective mother who is as concerned with getting her daughter back on track as she is wary of crushing her dreams. Issues of motherhood, female sacrifice, and the pursuit of happiness swell around Walters and Buckley as the mother-daughter pair, offering relatable experiences that will undoubtedly ring true for anyone who has ever attempted to chase a dream.

Wild Rose is a rare gem that prodigiously walks the line between British kitchen-sink drama and Americana grit, toe-tapping its way straight to the heart. Part Billy Elliot, part Coal Miner’s Daughter, Harper’s bittersweet film celebrates the power of music through and through. The rough council estates of Glasgow might not seem to align with the hallowed halls of the Grand Ole Opry, but Wild Rose finds transatlantic commonality in the universal struggles that are so deeply rooted in Country music, wherever it’s played.

1 comment on ““Wild Rose”: How the UK Does Country Music”