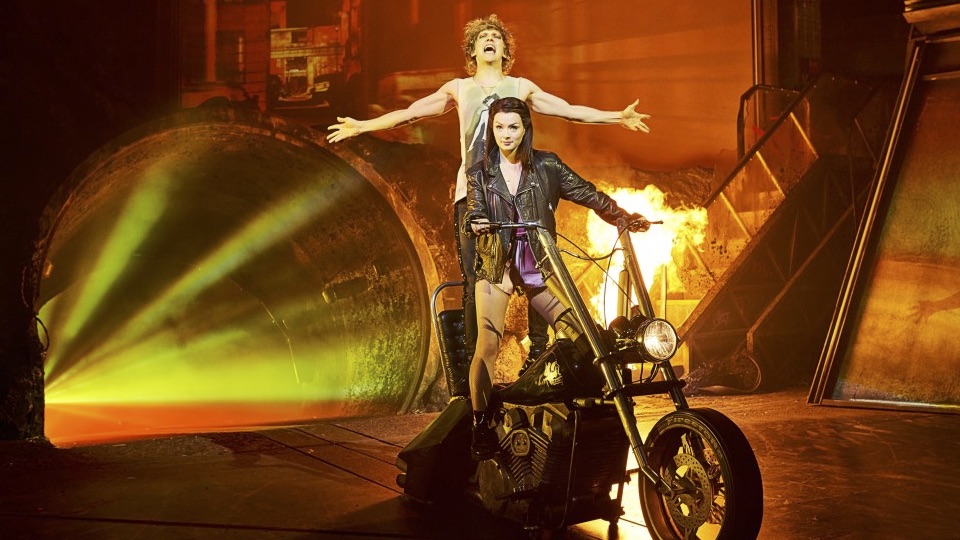 Perhaps to clear up any confusion over what you’re about to see as you enter New York City Center for the American premiere of Bat Out of Hell: The Musical, a gleaming motorcycle sits center stage with the words Jim Steinman’s Bat Out of Hell projected on the curtain behind it. This is about the expected level of subtlety from the man behind Meat Loaf’s 1977 breakthrough rock album of the same name and a catalog of similarly overly-theatrical anthems — which is to say, this bizarre, nonsensical but undeniably fun musical is anything but subtle. One character even says tongue-in-cheek (or was it?), “if you don’t go over the top, how can you see what’s on the other side?”

A West End hit, Bat Out of Hell starts with a literal bang — eliciting surprised gasps from all in the theater — and some weird, melodramatic poetry involving Stratocaster guitars and very fit people in tight, studded leather outfits. From there, it launches into a mixture of aggressively horny, high camp theatrics and near-operatic levels of spectacular rock n’ roll singing better suited for packed stadiums than a theater on 55th street in New York City. It’s a seriously unserious affair that will likely make you giggle at the exact moments you should be crying, but it’s a revved up, raunchy one that’s ultimately a schlocky joyride if you don’t linger too long on any plot specifics.

Speaking of the plot, Bat Out of Hell takes place in the post-apocalyptic city of Obsidian, formerly known as New York City, where some sort of chemical warfare or incident that is never fully explained froze its citizens at the age of 18. These teen mutant ruffians, who dress like extras from a KISS video and roam the subway tunnels on bikes and motorcycles, are conveniently named — wait for it — Freezers. Their poetic, Peter Pan-like leader, Strat (Andrew Polec), falls in love with newly turned 18-year-old Raven (Christina Bennington), the daughter of the villainous, wealthy dictator called Falco (Bradley Dean) and his sexually-frustrated wife, Sloane (Lena Hall). When Raven runs away to join Strat, all hell breaks loose. It’s Peter Pan meets Rocky Horror meets Mad Max meets Twilight. There are kernels of interesting ideas in Bat Out of Hell that never truly pop — it’s never popcorn, just corn, but utterly delicious all the same.

To distract from the plot holes and confusing character development, the show lets Steinman’s bombastic songs, Xena Gusthart’s aerobic choreography, and Jon Bausor’s scenic designs do most of the heavy lifting. There’s a lot to look at onstage — at times, too much. In fact, Bat Out of Hell is the very definition of “too much,” but in the best possible way (which also explains the mind-boggling 2 hour 40-minute running time, but don’t let that deter you).

Related: “Cheap Trick: Why Aren’t They One of the Biggest Bands Ever?”

The set is mostly sort of urban and grungy, recalling 80s sci-fi films like Escape From New York but allowing lots of room for the ensemble to leap and gyrate and the aforementioned motorcycle to zoom through. A handheld camera projecting close-ups of the leads in the Falco compound gives off an “early days of MTV” vibe. For reasons unclear, both Polec and Bennington writhe and undulate throughout the show as though Strat and Raven are constantly doing an emotional contemporary routine on So You Think You Can Dance. And if none of that is enough to hold your attention, Act I ends with confetti cannons going off, which stagehands spend the entirety of intermission diligently vacuuming up.

But this being a jukebox musical, the music is the true star, and boy does the cast take Jim Steinman’s songs straight into the stratosphere. Polec and Bennington are powerhouse singers who more than ably handle the vocal gymnastics these songs demand and manage to find some lovely, quieter moments as well on songs like show closer “I’d Do Anything for Love” and “Making Love Out of Nothing at All.” Supporting cast standout Danielle Steers, who plays Zahara, sings a gorgeous, soulful cover of “Two Out of Three Ain’t Bad.” And in a moment of goosebump-worthy brilliance in Act II, infamous Celine Dion power ballad “It’s All Coming Back to Me Now” becomes a thrilling quartet featuring Polec, Bennington, Hall, and Dean.

While Bat Out of Hell is obsessed with its impassioned youth, it’s ultimately the adults who steal the show. In a musical where scenery-chewing is not just highly encouraged but pretty much a requirement, Lena Hall and Bradley Dean devour everything in sight and then some as the warring spouses Sloane and Falco. Their showstopping duet of “Paradise By The Dashboard Light” sees the pair stripped down to their skivvies absolutely wailing the Meat Loaf tune and simulating sex on top of a convertible to full comedic effect. It’s one of the few moments in the show that feels truly, hilariously self-aware, hinting at a sharper satirical musical beneath all the operatic rock n’ roll bloat.

Bat Out Of Hell is playing through September 8 at City Center.

Photo: Andrew Polec and Christina Bennington in Bat Out of Hell

0 comments on ““Bat Out of Hell: The Musical”: All Revved-Up and Undeniably Fun”