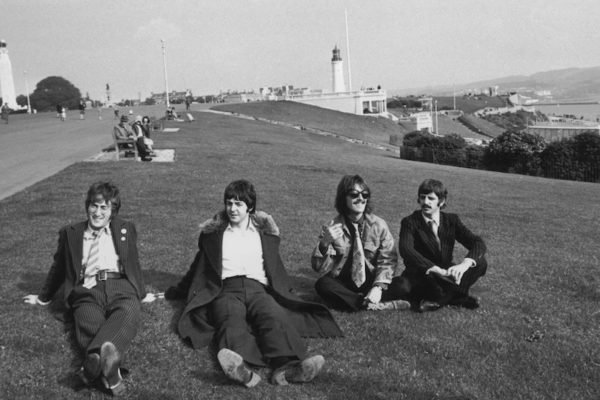 One of the most important traits of The Beatles was their ability to embody the zeitgeist. The swinging ‘60s, the hippie movement, the Summer of Love, and recreational drugs all came into play in their music at the pinnacle of their career – the primary mind-altering substances being marijuana and LSD. Who turned them on to pot? None other than Bob Dylan! According to Peter Brown’s The Love You Make, Dylan had misinterpreted the lyrics for “I Want To Hold Your Hand” — by mistaking “I can’t hide” for “I get high.” And so he brought a big bag of weed to the band during one of their NYC visits.

In George Case’s Out of Our Heads, Ringo recalls, “That was the first time that I’d really smoked marijuana and I laughed and I laughed and I laughed.” Per The Quotable Stoner, Paul McCartney also reminisced about that encounter: “Bob came round to our hotel, and he said to us, ‘Here, try a bit of this.’ It is very indiscreet to say this, because I don’t know whether Bob is telling people he turned the Beatles on to marijuana. But it was funny.”

For the next stretch of their careers, The Beatles were, well, periodically stoned. Don’t believe us? Here’s a quote from Jacqueline Edmondson’s biography John Lennon about their performances in the hit movie Help!: “The movie was out of our control. With A Hard Day’s Night, we had a lot of input, and it was semi-realistic. But with Help!, [director] Dick Lester didn’t tell us what it was about… partly because we were smoking marijuana for breakfast… Nobody could communicate with us; it was all glazed eyes and giggling all the time.”

The influence of marijuana on their music became pronounced in 1966, via their album Revolver. Which wasn’t necessarily a bad thing. In Brian Roylance’s The Beatles, their personal assistant/road manager Neil Aspinall said of pot during the recording sessions, “I guess it made recording a bit slower, but it didn’t affect the quality of the work.” At points, the influence was stronger than others: Lennon attributed the backwards guitar effect in the song “Rain” directly to being high.

“I got home from the studio stoned out of my mind on marijuana and, as I usually do, I listened to what I’d recorded that day. Somehow I got it on backwards and I sat there, transfixed, with the earphones on with a big hash joint. I ran in the next day and said, ‘I know what to do with it, I know…Listen to this!’ That one was a gift of God – of Jah, actually, the god of marijuana. Jah gave me that one” (from David Sheff’s All We Are Saying).

Around this time, the “Wicked Dentist” (revealed in Sex, Drugs and Rock ‘n’ Roll to be John Riley) famously introduced George Harrison and Lennon to LSD. It’s a sprawling story, but the long and short of it is that Riley invited the two Beatles and their wives over for dinner one night and dosed their coffee. He had intended to try and spark some kind of orgy but instead the foursome ended up in an elevator at a London nightclub shrieking madly as they hallucinated that their transport was engulfed in flames. Lennon remarked on this moment that, “The lift stops and the door opens and we’re all going ‘Aaahhhh’, and we just see that it’s the club.” As bad trips go, it could’ve been worse.

Yet the after-effects were profound. Quoted in Rock ‘n’ Roll Myths, George Harrison had this to say: “The first time I had acid, a light-bulb went on in my head and I began to have realisations which were not simply, ‘I think I’ll do this, or ‘I think that must be because of that.’ The question and answer disappeared into each other. An illumination goes on inside: in ten minutes I lived a thousand years.” The band mates’ subsequent experiences on acid led to several songs such as “She Said, She Said” — inspired by a trip at an LA house party where a young Peter Fonda whispered in Lennon’s ear, “I know what it’s like to be dead.”

Other trippy examples abound: tracks like “Tomorrow Never Knows” and “Strawberry Fields” have hallucinatory qualities; albums like Yellow Submarine and Magical Mystery Tour are entire odes to the psychedelic experience. Ironically, The Beatles were largely turned off to further experimentation after a visit to Haight-Ashbury, arguably the countercultural capital of the time. In fact, The Beatles cleaned up for a time after that in a big way. They traveled to India where they gained sober enlightenment with Maharishi Mahesh Yogi. Drugs aren’t the only way to get high, you know.

Photo: Image of the Beatles by Jim Gray/Keystone/Hulton Archive, courtesy of Getty Images