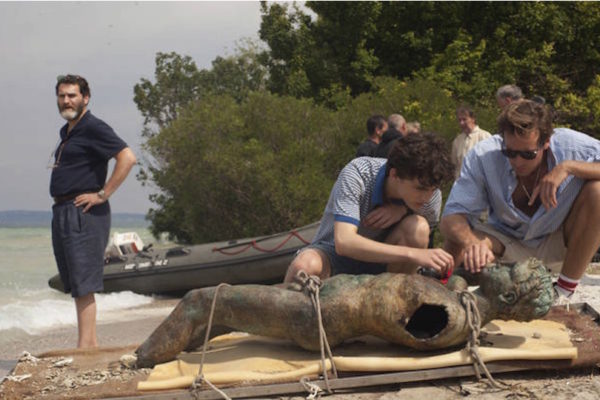 “First love” is a universal feeling that has cast all of us under its spell at one point or another, and it can often act as one of the greatest junctures in our development as individuals. From unrequited feelings, to bold declarations and uncharacteristic bravery, first love is an intoxicating, frustrating, and deeply influencing experience that shapes and changes us more than we often dare to realize. It is this torturous feeling of unknowing and the flood of emotions that occurs in young love that is so exquisitely portrayed in Luca Guadagnino’s pastoral movie of yearning Call Me By Your Name.

Based on Andre Aciman’s 2007 novel of the same name, Call Me By Your Name is a sun-drenched, coming-of-age story focused on precocious teenager Elio Perlman (Timothée Chalamet) and 20-something grad student Oliver (Armie Hammer) in the summer of 1983 — specifically, an annual event in the Perlman household during which a favorite student of Ello’s father-professor (Michael Stuhlbarg) visits the family’s 17th Century country palazzo in Lombardy, Italy to intern. Elio, being the well-mannered host-son that he is, vacates his room for the newly arrived guest and proceeds to show Oliver around town. But what starts as a normal, lazy-days summer filled with reading paperbacks, going swimming, and transcribing music, slowly turns into a life-changing journey of soul searching and sexual awakening.

At first, Elio is unsure of what to make of the new guest. Oliver is handsome and statuesque, not unlike the Greco-Roman statues which abound in his father’s scholastic work. But there is also arrogance to Oliver and, as the teenager discovers, an electric charge that draws the two of them together. It’s uncharted territory for both Elio and Oliver, and as they fill the long, hazy summer days posturing and posing for one another, there’s a palpable uncertainty that holds them both back. At least for a while. Theirs is a slow-burn attraction played out in weighted and controlled moments of varying intensity. At any one moment, nothing and everything is happening, and it is this conscious pacing of passion that makes their love story so stingingly raw in its universal truth.

Cinematographer Sayombhu Mukdeeprom fills each frame with postcard-worthy lushness and a sumptuous palette of hues that adds to the sensual, sensorial depiction of summer love we see on screen. From the trees teeming with ripened, juicy fruit to the sun-dappled bodies of those lounging around the Botticellian grounds of the house, every inch of the frame aches with beauty and suspenseful passion. Much like Todd Hayne’s Carol, this is a film that shows the power of love to transcend verbal discourse and pulsates through its two leads like shock waves of electrifying energy. It is as much what is unsaid as is said that is of importance in this relationship; each furtive glance, each lingering smile draws them closer together, emotionally and eventually, physically.

Above all, what makes Call Me By Your Name such a resounding triumph is its exceptional acting. The performances by both Chalamet and Hammer elevate this film to one of the best of the year, and the two actors bring a chemistry that is mesmerizing to watch. Chalamet is particularly remarkable, with his impatient physicality and boyish grace, and it’s easy to assume the actor brings much of himself into his thoughtful, mature performance. Also of note is Stuhlbarg who carries a particularly extraordinary scene with an astonishingly sensitive monologue filled with compassion and empathy that tugs on the heart and soul. Offering Elio a piece of fatherly advice, he stresses the importance of letting pain exist with joy, a comforting, yet simple piece of wisdom that we could all benefit from remembering.

You can feel the love and sincerity with which Call Me By Your Name was made, thanks to Guadagnino’s sensitive direction and the emotionally fuelled performances of its actors. It exudes a nostalgic sensibility that is intellectually unpretentious and so tenderly human that it is impossible not to fall under its charm. Here is a deeply affecting, timeless romantic masterpiece that should not be missed.

PS. As long as we’re talking 80s crushes…and a fresh approach to one of the greatest love songs ever written.