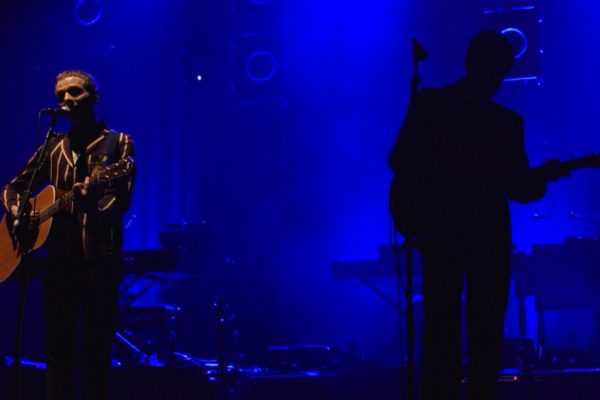 There’s probably no other band as widely covered as The Beatles. Practically from the moment they first emerged, they’ve been fodder for interpretations by artists from just about every genre. Through the decades, the Fab Four cover train has never stopped rolling. And in the modern era there’s a bigger bag of Beatles covers to sift through than ever before. So here’s a handy guide to some of the best. The artists range from R&B belters and alt-country pioneers to power-pop giants and heavy rock renegades, but they’ve all got two things in common: a passion for the canon of Paul, John, George, and Ringo, and a way to make the music their own.

1. Belle and Sebastian’s “Here Comes the Sun”
Though their lyrical weapon of choice is usually a mile-wide sardonic streak, the Scottish indie-pop stalwarts were able to put the irony aside for an entirely heartfelt take on one of George Harrison’s best-loved tunes. And sonically, B&S’s gently orchestrated folk-rock feel is just right for this delicate ode to hope and renewal.

2. The Smithereens’ “I Don’t Want to Spoil the Party”
In later years, power-pop heroes The Smithereens have become the barons of Beatle covers, devoting entire albums to Fab Four tunes. So they don’t mess around when it comes to a lesser-known gem like this country-influenced tune. Head Smithereen Pat DiNizio has always had a predilection for moody lyrical turns, and this melancholy cut suits that mournful mode perfectly.

3. Flaming Lips (Electric Wurms)’s “Fixing a Hole”
The Lips have always been psychedelic freaks at heart, so they seemingly couldn’t resist assembling an album-length tribute to Sgt. Pepper with assistance from some famous friends. But the band tackles this one alone, albeit under the alias Electric Wurms. Ironically, this was one of the last trippy tunes on the original album, with a feel that was more music hall than acid rock, but the Lips turned it into a dreamy, drifting piece of pure psychedelia nevertheless.

4. Melvins’ “I Want to Tell You”
The Melvins are better known for buzzsaw guitars and steam-hammer drums than the melodic delicacy that one associates with The Beatles. But somehow, hearing King Buzzo tear into the meaty riffs of this Revolver-era song, the whole endeavor seems to make perfect sense.

5. Futurebirds’ “From Me to You”
When the original version of this tune  —The Beatles’ third single — was released in 1963, the band was in its full-on Merseybeat mode. But in place of their version’s perky, poppy vibe, the Athens, GA outfit Futurebirds takes a warmly woozy, laid-back alt-country approach to the tune. Surprisingly, the song stands up just fine to the loose-limbed, laconic treatment.

6. Bettye LaVette’s “The Word”
When Bettye LaVette sings a song, it stays sung, and that applies to this Rubber Soul tune too. She takes the R&B inflection of the original version’s groove and amps it up to a full-fledged funk fest, with her vocal dancing freely but fiercely around the syncopated strut.

7. Jim Lauderdale’s “I’m Looking Through You”
There was always a slight country tinge to this tune, as shown by the fact that it inspired multiple bluegrass cover versions over the years. But alt-country hero Lauderdale brings a straight-up honky-tonk approach to McCartney’s deceptively upbeat-sounding song of disillusionment.

8. Matthew Sweet’s and Susanna Hoffs’ “And Your Bird Can Sing”
Power-pop legends Susanna Hoffs of Bangles fame and Matthew Sweet made a couple of albums together featuring covers of some of their favorite songs. Though they play this one pretty straight, the joy they take in singing it together is palpable. And those arrestingly angular guitar riffs never get old.

9. Cowboy Junkies’ “Run for Your Life”
John Lennon tossed this song off as a space-filler when the band needed an extra song for Rubber Soul, but there’s nothing frivolous about the tune’s murderously dark undercurrent. Nobody does murderously dark like The Cowboy Junkies. And though this version rolls at an unhurried pace like most of the Junkies’ output, it packs a meaner punch than is most commonly associated with the band.

10. Johnny Cash’s “In My Life”
This reflective ballad seems like a natural for what turned out to be the final album of Johnny Cash’s life. Even though he was nearing the end of his time with us, his voice was still huge and mighty, and it invests the song with a superhuman amount of gravitas. It’s almost impossible to make it all the way through without getting a little misty.

Editor’s note: While we’re on the subject, check out the trailer for CultureSonar’s latest Beatles’ film. Deconstructing Revolver “gets under the hood” of this classic album. It’s playing at theatres across the country. A splendid time is guaranteed for all!

PS. The Beatles and their songs are also part of our list of Kick Ass Covers. And for more Fab Four sounds, check out our post 15 Bands That Could Be Considered the Next Beatles.

22 comments on “10 Beatles Covers You Really Need to Hear”