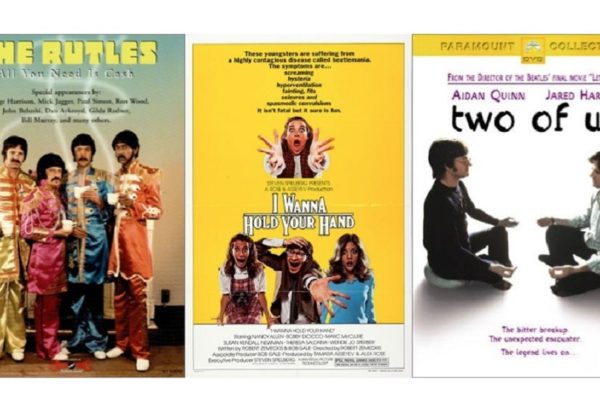 As Jim Morrison once famously asked: “Did you have a good world when you died? Enough to base a movie on?” In the case of The Beatles the answer is obviously, “Yes.” So good, in fact, that over a half-dozen films have been made (not to mention one thinly disguised but excellent parody). A second quote now comes to mind, this one from Harvard guy and psychedelic guru Timothy Leary: “I declare that The Beatles are mutants. Prototypes of evolutionary agents sent by God, endowed with a mysterious power to create a new human species (of laughing freemen).” I’m not nearly as high as Timothy Leary probably was when he said that (I’m actually not high at all), but I can safely say the variety of movies The Beatles inspired are a total trip.

1. Nowhere Boy (2009)
This one is great fun. In comic book terms, you could call it “the origin story.” In the beginning there was just John (Aaron Taylor-Johnson). He has a band: The Quarrymen. Paul comes to audition, and after committing the faux pas of asking for a cuppa tea, impresses Lennon with his interpretation of Eddie Cochran’s “Twenty Flight Rock.” Paul introduces John to George who plays “Raunchy” atop a double- decker bus. And so on. To be honest, I feel Nowhere Boy owes something to the similarly awesome but underrated That’ll Be the Day, a feature film about a band that while clearly not The Beatles happens to feature the very excellent “your friend and mine” Ringo Starr. Both are must-sees.

2. Two of Us (2001)
A “what if” VH-1 movie directed by Michael Lindsay-Hogg (Let It Be) stems from an imagined scenario in which Paul McCartney surprise-visits John Lennon at his home in NYC in 1976. Together, the two hang out, smoke some weed, smoke a lot of cigarettes, meditate, noodle around on the piano, philosophize, argue, and even wander around Central Park dressed in silly costumes. The two eventually iron out long standing difficulties and make nice with each other (a dream come true for all Beatles fans) on a rooftop of all places. It’s a great movie with an unexpected and surprisingly sad ending I won’t give away here. And hey, why isn’t Aidan Quinn a bigger star? He’s so good as Paul here!

3. I Wanna Hold Your Hand (1979)
This Robert Zemeckis comedy focuses on a group of teenagers from New Jersey who make it their mission to catch The Beatles’ very first performance on The Ed Sullivan Show. The obstacles? They’ve got no tickets and no money. The movie stars a pre-Robocop Nancy Allen as a girl looking for one last kick before she elopes with her boyfriend and the cute Wendie Jo Sperber from Bosum Buddies who proves again that Jerry Lewis was way wrong when he said women weren’t funny. Her performance is truly inspired lunacy. This movie would be a great rainy day double feature with A Hard Day’s Night. I’ll give it Four Ringos!

4. Birth of the Beatles (1978)
Next up is a scorcher which is everything Backbeat (1994) wished it coulda been. A British made-for-TV pic which I first saw in 1981 on ABC, this one basically tells how four guys (from Liverpool) with a rock and roll band and no desire for the 9-to-5 drill got it together and in a relatively short time changed the world through their talent, hard work and charisma. This movie may take your Beatles obsession to an entirely different level because it’s perfectly punk rock at times with its drunken anarchy. Advertised, if memory serves me right, as “the shocking real story of The Beatles,” this biopic includes violence, hookers, fire, betrayal, premarital sex, homosexuality, and plenty of drugs. Yeah yeah yeah! I loved it!

5. The Rutles: All You Need Is Cash (1978)
Arguably the greatest movie ever made that was inspired by The Beatles, this movie is not really about The Beatles in the strictest sense. You see, The Rutles are a fictitious group that happen to resemble The Beatles…a lot. There are some hilarious parodic songs like “OUCH!” (for “Help!”) and “Piggy in the Middle” (for “I Am the Walrus”) written by Neil Innes, who also plays the John Lennon stand-in Ron Nasty. Written by Monty Python‘s Eric Idle (who plays the movie’s “Paul”) and produced by Lorne Michaels, The Rutles also stars quite a few of the early SNL Not-Ready-For-Prime Time Players such as John Belushi, Dan Aykroyd, Gilda Radner, and the very brilliant Bill Murray as the fifth Beatle, Bill Murray “the K” — the DJ who introduces the band to America. Take note: This mockumentary came out six years before This is Spinal Tap. Pay attention: George Harrison has a small cameo.

3 comments on “5 Fab Films Inspired by the Fab Four”