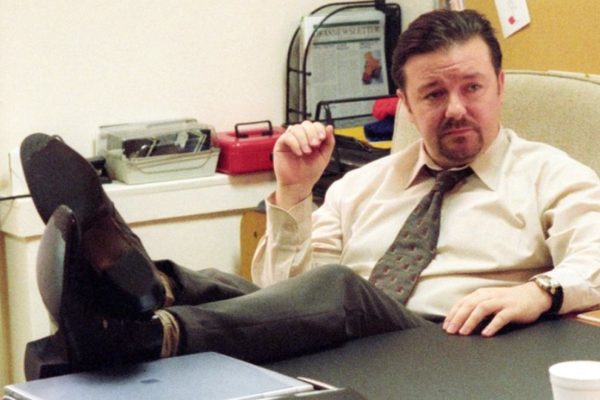 England enjoys a worldwide reputation for ear-pleasing speech, a magisterial royal family and dry, mad humor. That last item is on fine display with some sitcoms that bring delicious UK “flavour” to an established format, elevating the standard situation comedy to a side-splitting wit-fest. Whether a searing cynical take on romance, an amusing exploration of the dark side that resides within us all or a psychedelic mélange of naughty insanity, Britcoms are an embarrassment of comic riches and have been for decades. So here is a worthy (and partial) list:

2. Fawlty Towers (1977-79)
Another BBC offering, created and written by John Cleese of Monty Python fame along with his then-wife Connie Booth. This rather short-lived (24 episodes total) series revolved around the misadventures of a testy, pitifully snobbish innkeeper, his snarky wife, grounded maid and Spanish waiter whose mangling of the English language would not likely make the politically correct humor cut today. There is Python-esque physical comedy and endearingly dated humor. Basil Fawlty is a relatable curmudgeonly upstart for any era. The premise is based upon Cleese’s reaction to witnessing the owner of the Gleneagles Hotel, Donald Sinclair…”the rudest man I have ever come across in my life.” How’s that for a legacy?

3. Absolutely Fabulous (1992-96, sporadically from 2001-12)
This BBC sitcom mercilessly mocks (and oddly celebrates) the debauched narcissism of PR agent Edina Monsoon (Jennifer Saunders, writer, creator and star) and fashion editor Patsy Stone (Joanna Lumley). These two broads of a certain age are endlessly drinking, drugging and getting themselves involved in all manner of trouble. Wacky mix-ups abound. Patsy and Eddie are former London “mods” who are always chasing their fugitive youth with true gusto and acting like arrested-development fools. They often get bailed out by Edina’s dour daughter Saffron, who is grounded, bitter and more than a little weary of this twosome’s madness. Ab Fab, as it is affectionately known, has enjoyed a wide cult following, due to its unfettered rude humor and mordant wit. It aired for four years in the 1990s, with sporadic new episodes through 2012. It had a 2016 release as a film.

4. Coupling (2000-04)
Another BBC offering, Coupling is a wittily twisted variation on the American Friends format, with its dynamic of close pals who fight, fornicate, confide and conflate. The anchor couple is Steve and Susan, who look like the attractive, sane couple from Central Casting but are riddled with hilarious idiosyncrasies. Jeff, the mop-topped goofball, is part philosopher, part clown and full-time adorable bumbler. Jane is the drama queen, all id and puffery, Sally is obsessed with aging and cannot hide her mean streak underneath her attempts to be genteel. Patrick (aka, “Tripod” and “Donkey”) is sexually obsessed and happy to discuss his exploits with his mates over a few pints. What sets this brilliant series apart is its clever changes of shift, perception and even language, to bring all points of view, Rashomon-like, to the story arc, leaving the viewer both helpless with laughter and connecting strongly to the flawed humanity of these characters.

5. The Office (2001-03)
The jewel in the crown of brilliant creators-writers-directors Ricky Gervais and Stephen Merchant. Done in a fresh mockumentary style, The Office takes place in the bleak office setting of the fictitious Wernham Hogg Paper Company, in the grey industrial town of Slough. The main character, David Brent (Gervais) is a blowhard buffoon. Feverishly managing an oddball bunch of employees, Brent is an egotistical and pitiful man who cannot read the tone of a room, hit on a woman with any degree of grace or remove his foot from his non-stop mouth. He is a squirmfest, a guy who tosses out racist asides without any awareness and sees himself as a great motivational force while all others view him mockingly. The naturalistic cast of likable misfits speak their dreams to the camera and battle office and sexual politics. There is a grand love story within, and life lessons throughout. From the stirring “Handbags and Gladrags” theme, vista of soulless buildings and repeat hum of the copy machine, it captures the messy grace within the confines of corporate tedium.

6. Extras (2005-07)
Another worthy offering from the Gervais and Merchant team, Extras explores the bottom-rung show business hierarchy of actors who work as “background” in movies and TV. The lead, Andy Millman (Gervais) is a likable sad sack who leaves his real job to pursue a career as a character actor; he winds up the faceless bloke in a crowd scene. He aspires to fame without having the tools or the humility, though he eventually finds recognition of sorts on reality TV. He interacts with his friend Maggie (the cleverly nuanced Ashley Jensen), who is content as an extra but finds life itself difficult to navigate and his hilariously ineffectual agent, played by Stephen Merchant. High-level stars (Kate Winslet, Samuel L. Jackson, Ben Stiller, Patrick Stewart and others) make notable appearances, playing cranked-up takes on their public images, to great comic effect. With its cynical life view and accessible humanity, Extras wonderfully mixes the sour with the sweet.

7. The IT Crowd (2006-13)
Nothing short of an uproarious comic confection, The IT Crowd is a late era sitcom with throwback aspects of earlier ones, from the obsolescent three-camera perspective to the laugh track. Maurice Moss (Richard Ayoade) and his co-worker Roy Trenneman (Chris O’Dowd) are computer geeks who are usually confined to the gritty sub-basement offices of the fictitious Reynholm Industries, a London company with sleek boutique nonsense on the upper floors while the best action occurs below. Their manager Jen (Katherine Parkinson) is an attractive single woman who hilariously lied her way into the position in desperate need of a job, though she knows nothing about computers. Moss is a virginal geek with great computer chops but a complete disconnection with the real world; his contentment in his quirky skin is part of his powerful charm. Trenneman is the grumbly naysayer, cynical and restless, with undeniable rootin’ interest. It is a showcase of glorious madness and unexpected emotional investment. Based on one particularly funny installment, we will never think of “sea parks” without smothering a snort of laughter.

8. The Inbetweeners (2008-10)
Get ready to relive your teen years, cringe, laugh and acquire a whole new disgusting vocabulary for genitalia. The Inbetweeners deals with the painful vagaries of adolescence, experienced through the eyes of four English buddies: ambitious nerd (Simon Bird), good-natured intellectual lightweight (Blake Harrison), soft-hearted curmudgeon (Joe Thomas) and arrogant infant (James Buckley). Directed by Damon Beesley and Iain Morris and narrated by Simon Bird in his likable geek persona, we follow the misadventures of these English suburban boys as they deal with dysfunctional parents, moronic teachers and hilariously thwarted sexual experiences. It is edgy and raw, but never without heart.

0 comments on “The Best of Yesterday’s Britcoms: From “Monty Python” to “The Inbetweeners””