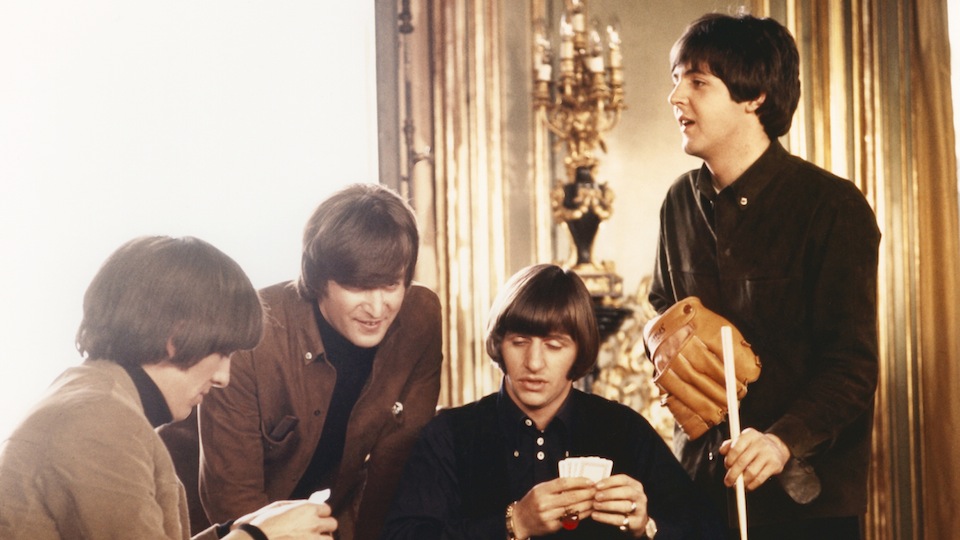 The Beatles have left an indelible mark on pop culture with their legacy of stellar songs. But their output was not confined to music. From 1964 to 1970, they also created five movies – each distinctly different, each undeniably Beatlesque, all eminently watchable. It is incredibly fun to see their individual personas play out on the silver screen. As band members, we all thought we knew them. John was the genius. No, Paul was the genius. (Discuss!) George was the brooding humanitarian and Ringo, the charming goofball. Is this how they came across in their movies? Let’s see…

The Fab Four’s first film is a wittily glorious ode to the early days of Beatlemania. Shot in a loose documentary style, with jump-cut edits that predicted a predominant music video style of the early ’80s, this black-and-white romp tracks The Beatles as they head by train to London for a concert. Trying to dodge the hordes of screaming females who block their path at every turn, they still have fun while in the company of Paul’s hilariously roguish grandfather. The sparkling dialogue in the opening scene lays out their “characters”: John is cheeky and snarky; Paul, adorably vain; George, wryly detached; and Ringo silly yet sweet. The plot is sparse but the period details are perfect. This foursome has charisma to spare. Playing like a Marx Brothers film for pop stars — with its collision of physical humor and finely tossed-off jokes — A Hard Day’s Night is one riotous ride.

This madcap movie has The Beatles looking to avoid an evil if incompetent cult that’s on the prowl for Ringo who’s unknowingly acquired a cursed ring gifted by a fan. Turns out that bit of jewelry has marked him as the cult’s next sacrificial victim. Throughout, Ringo once again projects an “aw shucks” persona, even remaining game when the evildoers try to shrink his finger to retrieve the ring. In that instance, as luck would have it, poor pretty Paul gets shrunk instead — right out of his suit, leaving him to hide his naked self behind a gum wrapper in an ashtray! As for the rest of the band, this time around, John’s more removed and agitated while George is serving major brood. Repeated references to George being cheap make you wonder about an inside joke. Whatever the case may be, with its effortless mix of fantasy, rapid-fire dialogue, and non-stop action, Help! remains a reliable crowd-pleaser.

This surreal, hour-long made-for-TV movie might be best described as a drunken day trip to…nowhere. But don’t let that dissuade you from seeing it. Ahead of its time, the trippy joyride follows The Fab Four as they drive around on a bus, sing, drink, argue, and engage in absurdist chatter. In hindsight, this BBC special seems hardly worth the backlash it caused upon airing the day after Christmas. (McCartney actually apologized!) Why not simply describe it as an extended, unscripted, high-concept music video with all four band-mates at their wackiest? Labels aside, the old-timey elegance of “Your Mother Should Know” is hard to resist.

While some may recall The Beatles TV cartoons of the 1960s, Yellow Submarine takes that concept to an almost hallucinogenic level. The plot? A music-filled, peaceful undersea venue is attacked by the music-averse Blue Meanies, who drain this rich arena of all color, flowers, and happiness. An old, escaping sailor enlists the help of The Beatles, who get in the titular Yellow Submarine and save the day. The glories of the animation cannot be overstated — the colors, the costumes, the kitsch. If the hippie ethos feels pro-love and pro-peace minus pro-sex and pro-drugs, so be it. Some stellar songs are used to great effect here:  “A Day in the Life,” “When I’m 64,” “Lucy in the Sky with Diamonds,” and “All You Need is Love.” They may be 2-D this time around but you still sense John is a poetic wordsmith, Paul is cuddly clever, George is adamantly dry, and Ringo is heroic if hapless. The actual 3-D Beatles make a fun cameo as well.

The Beatles’ final feature has a poignant back story and a grainy look. Intended as a “behind-the-scenes” doc of a TV concert that never made it to air, Let It Be morphed into a paean to the band’s final days. Voiceover-free, the film is geared to die-hard fans with some knowledge of these guys’ complex history. What we see – simply and painfully – is the belabored, fraught rehearsals that led to their iconic “rooftop” session at their Apple Studios. While Paul is the resident bandleader (and his wrenching rendition of “Let it Be” will move even the stone-hearted), the others appear at the end of their respective tethers. John, now in the company of new love Yoko Ono, looks removed and joyless; George seems to have curled up into himself when he isn’t throwing out a quietly anguished response; and Ringo drums gamely, even as his eyes hold so much weariness. It is not a feel-good film. But it is a stunning time capsule of the end of a musical dynasty.

1 comment on “Rock On! Five Films by the Fab Four”