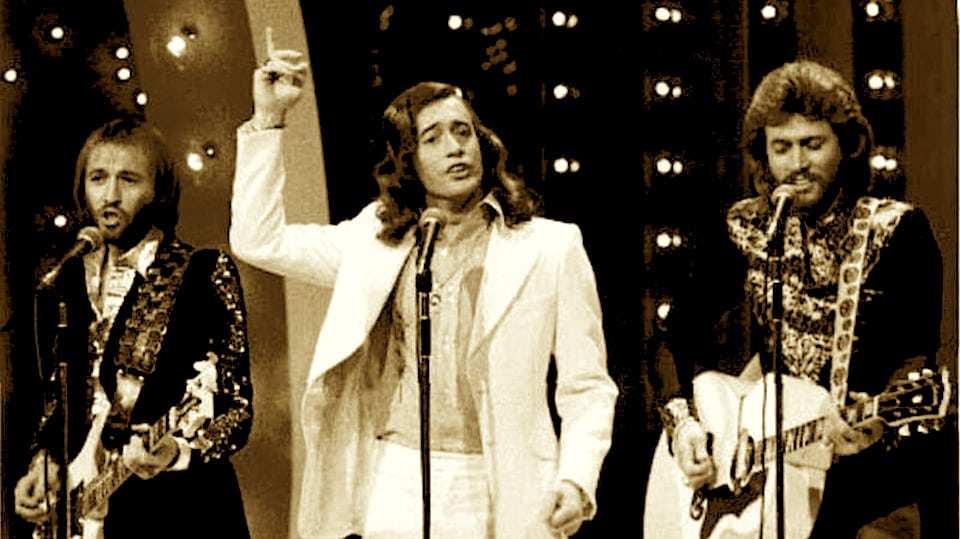 The Bee Gees owned the universe in 1978. Their songs–both written and performed–dominated the soundtrack for the film Saturday Night Fever, which itself dominated pop culture. How did it happen? Were the Brothers Gibb (Barry, Robin, and Maurice) lucky, good, or both? Let’s look at the factors that made 1978 possible.

Quantity: Before the Saturday Night Fever soundtrack, the Bee Gees had already recorded 14 studio albums of original material, dating back to 1965’s bluntly-titled The Bee Gees Sing and Play 14 Barry Gibb Songs. The brothers would go on to write a total of more than 1,000 songs! (By contrast: Bob Dylan wrote some 522 songs; Lennon-McCartney some 180 together.)

Composition: The Bee Gees had their first run of Top 40 Hits (USA) in the 60s–eight in all. While a couple of them became classics (“To Love Somebody“, “I Started a Joke“), they all featured extremely simple chords. Five of the eight hits featured nothing more than major and minor chords. This would start to change in the early 70s (“Lonely Days“, “How Can You Mend A Broken Heart?“), and by mid-decade, Barry and Co. were regularly using jazz-style chords as well as adventurous chord progressions (brother Andy Gibb’s “An Everlasting Love“ and “I Just Want to Be Your Everything“). They had matured as musical composers.

Vocals: Barry’s falsetto made its debut (basically by accident) on 1975’s “Nights On Broadway.”Robin would join him in the upper registers on “Love So Right“ a year later. After almost two decades as a group, the Bee Gees had discovered a new and unique sound–and while other aspects of their music were evolving as well, this one, thanks to genetics, was all but impossible to imitate (not a bad thing to possess in a copycat industry like pop music).

Production: In 1976, the Bee Gees started working with two new producers who would remain with them throughout the decade: Albhy Galuten and Karl Richardson. The resulting 1976 album, Children of the World, showcased more high vocals (“You Should Be Dancing,” “Love So Right,” “Boogie Child“) and foretold what was to come, production-wise: intricate arrangements and an adventurous use of instruments such as synths (“Tragedy“), horns (“You Should Be Dancing“), and rhythm guitar (“Night Fever“).

The X-Factor: This would be Saturday Night Fever. When the offer came to write songs for the film, the Bee Gees were firing on all creative cylinders. “How Deep Is Your Love,” “Night Fever“ and “Stayin’ Alive“ are pop masterpieces (heck, just the intros are masterpieces), and they were all written in just a few days. Oh by the way, they also wrote “More Than a Woman“ and “If I Can’t Have You“ for the film.

[amazon template=right aligned image&asin=B000P6R6VK]Perhaps no film has ever been more intertwined with its own soundtrack than Saturday Night Fever. It’s hard to imagine the Bee Gees and John Travolta riding their rocket to mega-stardom without each other. Was it luck? As the saying goes, “The harder you work, the luckier you get.” When their moment came, they were ready: John with his acting, dancing and attitude; the Bee Gees, thanks to years of perseverance and evolution, with their musical gifts in full bloom.

Author’s note: Which artists today have put in the years and the effort to make them ready for the jump to superstardom? Could a film/soundtrack duo take over pop culture for an entire year in today’s media landscape? Please share your thoughts in the comments or on our Facebook page! Also, for any guitar players: you can read a deep-dive on one of Barry Gibb’s favorite chords here.

Photo Credit: Public domain image of The Bee Gees on The Midnight Special.

0 comments on “When Their Moment Came, They Were Ready”