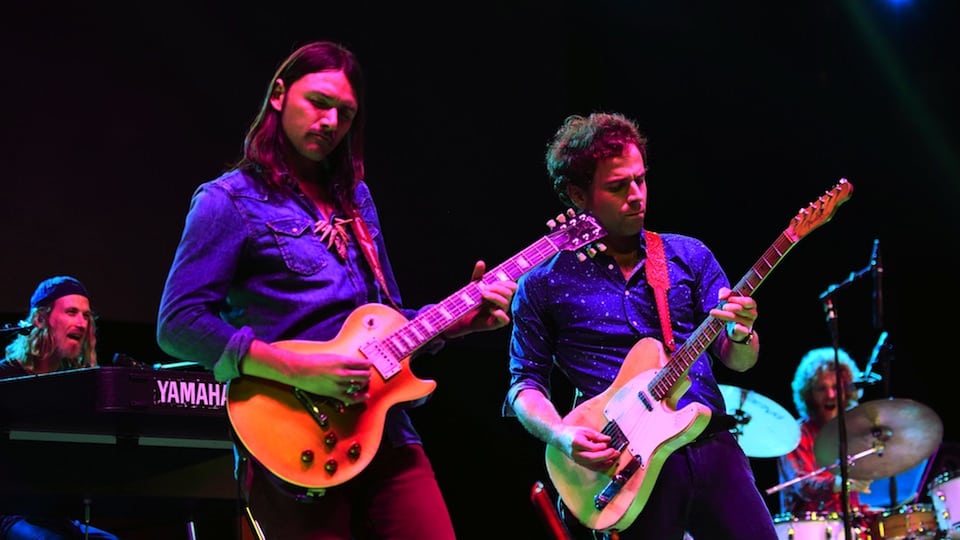 Often new artists can find ways to revitalize and extend the “micro-genres” of artists who have largely fallen out of favor – working the same vein in a new context, with new tools. One such pairing that comes to mind is Jackson Browne and the L.A. band Dawes.

Jackson Browne came to prominence among a wave of “confessional” singer-songwriters in the early ’70s, though like many of his peers in that genre, he had been part of the music biz for some years at that point. He was briefly in the Nitty Gritty Dirt Band, and worked with Nico of The Velvet Underground, as well as Tim Buckley.

When he found his groove as a recording artist in 1972 (“Doctor My Eyes,” “Rock Me on the Water,” “Jamaica Say You Will“), he quickly established himself alongside Joni Mitchell, Roberta Flack, Cat Stevens, James Taylor – insert your favorite whom I have left out here – as an influential player in the turn to lyrical introspection and a quieter style of arranging in pop music. Ultimately he sold about 18 million records in the U.S. across the peak of his career, his most successful album being the live recording Running on Empty.

There are some very distinctive features to Browne’s work, though his approach dovetails to a certain extent with some of his contemporaries.

He has a consistently relaxed vocal delivery – unlike James Taylor or Cat Stevens, for example, Browne virtually never tries to “blues it up” with a raspier or more aggressive tone. Even more so than Taylor, his vocal style has a way of feeling like a comfortable rocking chair – no sense of trying to impress, no breathiness or melismatic trickery, just a straight and even telling of the story at hand.

Browne’s music is heavily piano and keyboard-based, with guitars providing instrumental variety rather than bedrock comping – David Lindley’s slide guitar is a crucial piece of the Running on Empty sound. His lyrics, whatever their source in his life, feel very much like personal stories. A few later songs like “Lawyers in Love” have a more sardonic, detached narrative voice, but almost all of Browne’s classic songs are intimate and small-scale in their point of view and tone.

Between 1980 and 1983, Browne had a run of pop hits featuring a much more declamatory and assertive delivery than his earlier work. “Boulevard,” the smash single “Somebody’s Baby,” and “Tender Is the Night” all very successfully blended Browne’s writing style with early 80s pop arranging styles. His prominence waned as the 80s wore on, though he of course continues to record and perform for a loyal following.

If you love Jackson Browne’s music, there is a California band that might just slake your thirst for more of his kind of writing and singing. The L.A.-based quartet Dawes operates in much the same territory as Browne’s classic albums. After I saw them open for Dylan a couple years ago, I heard them compared to Laurel Canyon icons like CSN, Joni Mitchell, and Neil Young, but I believe Jackson Browne is a far better reference point. They lack CSN’s reliance on vocal harmony and often jammy vibe; they lack the rootsiness and overt country twang of Neil Young, and the extended jazz harmonies of Joni Mitchell. But, especially in concert, Dawes almost directly evoke Browne. There is the same introspection, the same intimate atmosphere and relaxed delivery. Dawes are certainly more guitar-based than Browne ever was, but even the guitar sounds often have a smooth, round tone that seems to replace the role of a keyboard.

None of this would matter to a fan of Jackson Browne if the songs were lame, but thankfully they are not. The narrative voice is somewhat less direct, but there is a “short story” focus on small events and real people that similarly draws one in. It is perhaps a reflection of the current dominance of mostly synthetic, highly compressed, and aggressively voiced music that Dawes are not a breakout act by any means. But they are well worth your time and ears, and a reminder that writing styles and musical genres don’t die, the camera just gets pointed elsewhere.