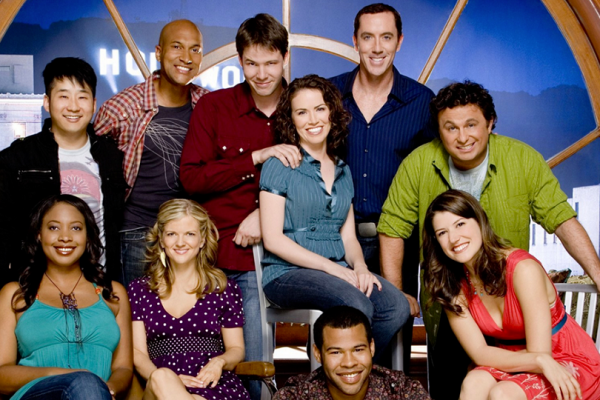 In case you haven’t heard the news, take note: MADtv just premiered a reboot of the diversity-rich, alt-comedy answer to Saturday Night Live on The CW. So in honor of the new MADtv’s premiere earlier this month, let’s take a stroll down memory lane circa 1995 to 2009. There are so many funny sketches worth a revisit. (Good news: The entire original series can now be streamed on the CW Seed.)

Apple iRack
People forget that Michael Fassbender and Ashton Kutcher weren’t the only two to portray Steve Jobs. Michael McDonald did too in this sketch that demonstrates our country’s longstanding uneasiness with our continued military presence in the Middle East and our nearly-as-long obsession with Apple products.

Darlene McBride
Nicole Sullivan was one of the original cast members of MADtv and is best remembered for the tart-tongued Vancome Lady and the shy oddball Antonia. But she also portrayed the unapologetically right-wing Darlene McBride, a racist, gun-loving musician, who feels like she might’ve been concocted yesterday.

Dot and The Dryer
Stephnie Weir remains one of the most underrated comedic actresses in Hollywood today. Acknowledged as a top-notch improviser and sketch performer in the comedy world, she created one definitely unforgettable character on MADtv: Dot Goddard, an attention-challenged 7-year-old girl with a genius twin sister. This particular sketch incorporates all the usual Dottisms (gloves, Jesus and the supernatural, impatient parents) then adds an extra dose of surrealism.

Sad 50 Cent
Before they created the critically acclaimed Comedy Central show Key & Peele, Keegan-Michael Key and Jordan Peele showed up on MADtv and their signature style is evident even here in this musical parody. Peele’s 50 Cent impression is especially funny when he’s singing a silly ballad with inspired lyrics: “I made 400 million in a single day/Why can’t I afford my inside rent.”

Similar Sounding Senators
In 2003, MADtv took an unusual departure away from pop culture parodies by airing this incisive political sketch pointing out the similarities between the Republican and Democratic parties. From a performance perspective, Michael McDonald and Ron Pederson are perfectly matched as they mimic not only each other, but the political arena as well.

Son of Dolomite Meets Blackbelt Jones
This blaxploitation parody heightens the low-budget aspects of the genre, with a hilarious voice-over, a brilliant ensemble cast, and a funky soundtrack in the background. At a time when SNL hired very few people of color as performers, MADtv took the lead in exploring race in a provocatively edgy way.

Who Do You Love
This sketch is the stuff of comedy nerd fantasy. It’s what I call a “thinker” — unfolding at a slow patient pace, shifting from a straightforward skit into a meta-comedy about the relationship between its lead performers Mo Collins and Stephnie Weir as themselves. It’s hard to explain. Just watch it.

0 comments on “Mad for MADtv”