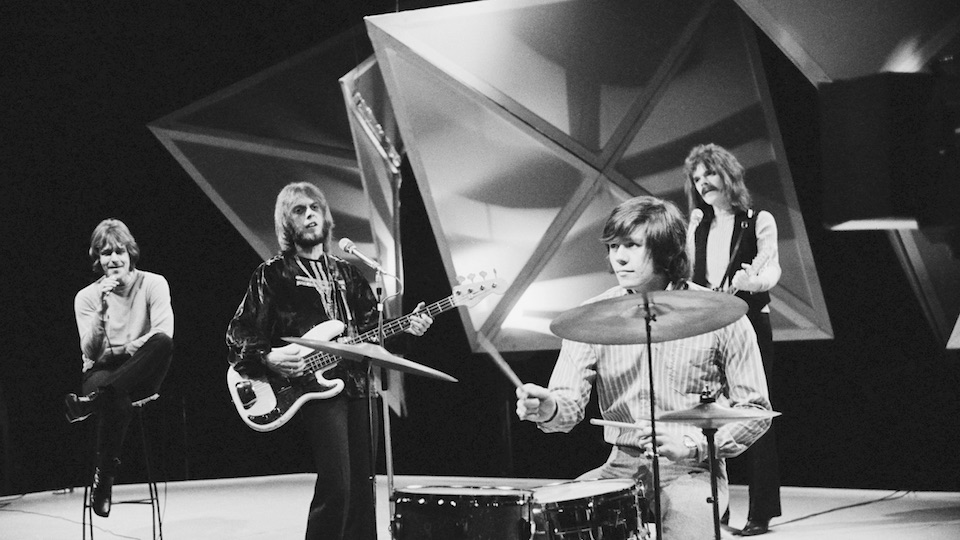 The Move was one of the most successful bands of the mid to late 60s, garnering nine Top 20 singles in England in just five years. While the band wasn’t a major success here in the States, they nonetheless had a lasting impact. Fans of the band include Cheap Trick and Jellyfish, both of whom have covered their songs. Several members of the group went on to form Electric Light Orchestra. The Move was formed in 1965, when bass player Chris “Ace” Kefford and guitarist Trevor Burton, veterans of some well-regarded local bands in Birmingham, decided to start their own group. They recruited guitarist Roy Wood, vocalist Carl Wayne, and drummer Bev Bevan, and thus The Move was born.

Related: “A Change of Weather: The Story of ELO’s ‘Out of the Blue'”

Their first single “Night of Fear” reached number two in the UK. The follow-up, the psychedelic-flavored “I Can Hear The Grass Grow” was also a hit, reaching number five in 1967. The group gained notoriety through manager Tony Secunda’s wild stunts, which included encouraging the band to dress in outlandish costumes, and having lead singer Wayne destroy TV sets with an axe during their live shows. The Move also had a versatile sound that regularly bounced around the pop and rock arena, thanks to Wood. He was the band’s creative spark and chief songwriter throughout much of their existence. His eclectic talent spawned tunes that ranged from the Kinks flavored “Fire Brigade” to the Beatles-inspired “Blackberry Way.”

The band’s third single, 1968’s “Flowers in the Rain” was poised to be another huge success. But Secunda (who also counted The Moody Blues and T. Rex among his clients) issued a promotional postcard for the song featuring a drawing of Prime Minister Harold Wilson in bed with his girlfriend. Wilson sued the band for libel, and all royalties were awarded (in perpetuity) to charities selected by him. Over the next couple of years, both Kefford and Burton left the group. The Move continued on with guitarist Rick Price and briefly toured the US in 1969, where they opened for Iggy and the Stooges. After an odd period where the group played dates on the cabaret circuit (!) in their native England, lead singer Wayne left the band. Wood then took over the lion’s share of vocal duties.

departure led to an important development, as Jeff Lynne (formerly of the pop/rock group The Idle Race) joined the group. The band’s third album, Looking On, combined Lynne’s pop sensibilities with Woods ironic humor and darker themes and was one of their best. The Move’s sound began to transition into a more progressive rock direction. Wood was also eager to explore a new idea that combined orchestral arrangements with rock and roll instruments. During this period, the band released several more successful UK singles, including “Brontosaurus” and “California Man,” which was later covered by Cheap Trick.

The band’s final album, 1971’s Message From The Country, was recorded while Wood, Lynne, and Bevan were also working on their orchestral rock side project, which came to be known as the Electric Light Orchestra. These sessions yielded “Do Ya”(originally released as one of The Move’s final singles) and “10538 Overture” both of which became signature tunes for ELO. Wood, Lynne, and Bevan released The Electric Light Orchestra in 1971, effectively signaling the end of The Move and the beginning of ELO. Wood left the group after that first album, to form the band Wizzard, while Lynne continued on, turning ELO into a rock/pop juggernaut in the 1970s. However, it all started with The Move, who was one of the most unique, influential and original bands to come out of the British Invasion.

5 comments on “Before E.L.O. There Was The Move”