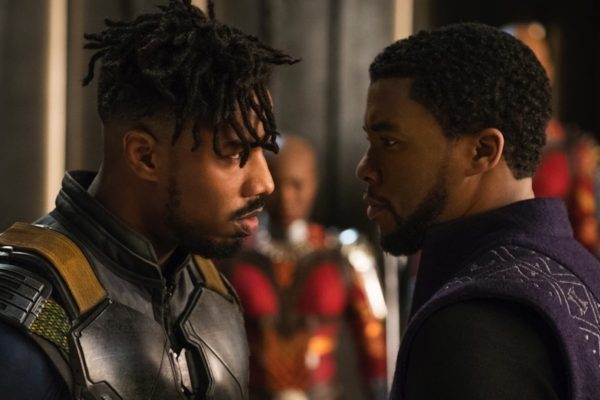 After being introduced into the Marvel universe in 1966 (Fantastic Four #52), then having Wesley Snipes’ attempt to bring him to the big screen in the 1990s, then a short-lived six-episode animated series on BET (with such luminaries as Djimon Hunsu, Kerry Washington, and Alfre Woodard), Black Panther has finally arrived in the mainstream. Forbes reports that the Black Panther film took in $75.8 million its first day (factoring in the $25.2 million Thursday preview). That box-office success is well-deserved: a superhero flick is sorely needed during our current times, and there are many, many reasons to love this film.

Black Panther shows people of color in positions of power rather than as the oppressed, with no white savior swooping in to save the day. It passes the Bechel test numerous times with flying colors. It uses the actual South African language “Xhosa” as the language of Wakanda (prompting Winston Duke — who plays one of the hero’s primary foils to use a Nigerian accent — but more on that in a minute). All these make for an excellent film to be sure, but there’s also this: Black Panther is just so damn good. (From here on, spoilers ahead.)

Stunningly shot by Rachel Morrison, Black Panther is that rare superhero film that takes the time to make its heroes and villains into three-dimensional beings. Under the steady hand of director Ryan Coogler (Fruitvale Station, Creed) and with superb acting by its stellar actors, the film allows its hero to be flawed, its villains to have understandable motives. T’Challa (Chadwick Boseman), the young man who becomes the Black Panther, has some life lessons to learn throughout this narrative, not the least of which is how to deal with the imperfections of his recently-deceased father T’Chaka (John Kani). And while you’re unlikely to agree with the destructive actions of the movie’s main antagonist Erik Killmonger (an excellent Michael B. Jordan), you can certainly see why he does what he does. This is also true regarding the actions of W’Kabi (Daniel Kaluuya), T’Challa’s childhood friend who turns on him. A final rival, M’Baku (Winston Duke), could have easily been a one-dimensional bad guy, yet even here Coogler and his co-writer Joe Robert Cole (American Crime Story, Amber Lake) have crafted a character much more complex than the norm, right down to his use of language. (Note how he uses the word “we” instead of “I” when speaking of his tribe’s welfare.) And while M’Baku’s disdain for T’Chaka is clear, so is his grudging respect for him as a fellow leader doing what he thinks is best for their country.

Another aspect that elevates Black Panther is T’Challa’s obvious respect for the women in his life. The women of Black Panther are unflinching and unapologetic in their power and prowess, as well as the choices that they make — from love interest Nakia (Lupita Nyong’o), to captain of the guard Okoye (Danai Gurira) to queen mother Ramonda (Angela Bassett) to scientific whiz sister Shuri (a scene-stealing Letitia Wright). His relationship with his sister Shuri is particularly refreshing in the Marvel Universe. Rather than being mired in antagonism and rivalry, sibling rivalry is usurped by mutual respect and love. Indeed, Shuri’s confidence in her scientific prowess and her brother’s unquestioning faith in that ability is an all-too-common rarity in film at large. There’s no “mansplaining” here.

Let the record show: Black Panther is not only proof that an action film starring people of color can smash box office records, it’s also a game-changer to the superhero genre which — despite the success of the equally groundbreaking Wonder Woman — is in need of a good jolt judging from the opening weekend’s box office numbers. And so… Behold the Marvel that is Black Panther. We can’t wait to see more. Wakanda forever!

0 comments on “Behold the Marvel of “Black Panther””